New research from Pew on the reading habits of Americans has an interesting finding: reading books on cell phones has been increasing rapidly. In 2011, only five percent of Americans reported having read a book on a cell phone. That number has almost tripled, to 13 percent. Additionally, 11 percent of Americans who have never attended college report having read a book on a cell phone. This squares with a broader trend that people with less income are more likely to rely on mobile internet access exclusively.

There’s a potential library in everyone’s pocket, and it’s catching on. This move toward reading on phones may also help explain why e-reader sales have leveled off.

The study’s authors surveyed 1,520 Americans by phone for a month starting in March. Overall reading has been flat, though surprisingly better than many of us might have thought. The typical American reports reading four books each year, though the reported average is 12 (because some people read a crazy amount, as we’ve reported again and again in our Titans of Kindle series). Unsurprisingly, that’s not the news that most writers jumped on in this study. With the exception of Galleycat, Bloomberg, Bustle and those covering “National Read a Book Day,” every other headline concerned the supposed battle between print and e-books.

You would think that people would care more about the finding that people still do a fair amount of reading. Who cares whether they read on old or new technology? There’s a weird fetishism for these physical objects made largely from pulp among the press.

While The New York Times followed the rest, it did capture the crux of the moment we’re in, writing:

It’s weird that no one seems to have balanced the polling research (which was based on self-reporting, which no doubt bent somewhat in an aspirational direction) with the earnings information we recently got from Penguin Random House and Hachette. Both saw revenues tanking by 10 percent due to declines in e-book sales.

Not really. The plunge in e-book sales followed a 25 to 40 percent increases on the cover prices of e-books from the major publishers, as we’ve previously reported. If e-book sales hadn’t plummeted after that it would have violated everything we know for sure about microeconomics. It’s not so surprising that the shift to e-books has been stalled. Sort of.

It’s only sort of stalled because the only data that ever gets reported on about e-books comes from the traditional publishers. A site founded by indie authors, Author Earnings, has been crawling Amazon for sample data points such that it can make reliable (but not perfect) estimates of the e-book market. It shows that the big publishers’ e-book sales trending down and indie published books shooting up (probably more than enough to make up for whatever ground major publishers have lost). These trends continue in its most recent report, on data from May, released at the end of August.

Author Earnings data, it should be noted, may be somewhat more reliable in what it reports than survey data in which humans might speak more to the person they would like to be than the person they actually are.

Author Earnings data shows authors making a surprising amount of money. The site’s most recent post reports, “1,340 authors are earning $100,000 per year or more from Amazon sales. But half of them are indies and Amazon-imprint authors. The majority of the remainder? They come from traditional publishing’s longest-tenured ‘old guard.'”

We live in exciting times. Today it’s possible to be a full-time professional author, quietly earning $50,000-plus a year—even six figures a year—without ever sending a query letter to anyone. On Amazon alone, the data shows over a thousand indie authors earning a full-time living right now with their self-published titles.

In other words, books are doing great and authors are doing better in an e-book world. It’s strange that readers perceive any tension between e-books and print.

If you like to read, e-books mean you can always have books with you as long as you have your phone with you, but then your print books are always handy back at home. For those that love books, this should be a better world.

If you care about literature, then it’s hard to argue that e-books haven’t been a great boon to the form. More books are getting written and read. More writers are paying their rent with income from writing.In fact, it used to be that writing was a sideline while a writer paid his or her bills some other way, usually by teaching. We have spoken to several extremely successful e-book writers who would lose money that way. The highest and best use of their time is typing out that next page.

E-books have also diversified income. For example, by making rental programs possible, like Kindle Unlimited, which authors like Hugh Howey have told us means he earns much more money from more readers. In talking to multiple writers whose works consistently achieve bestselling e-book status, it’s clear that e-books have replaced the old school pulp paperbacks once ruled by genre fiction. The big-L literature titles continue to be the province of major publishing houses. And that’s all to the good.

The only community really threatened by e-books are bookstores. That’s too bad, but which is more important: the health of the art form or one of its means of distribution?

In fact, returning to the Pew results, the researchers found that very few people strictly read e-books. As long as there are cheap and free used books around, print will stick around, and no doubt new print books will keep coming as well. That’s all to the good.

E-books are doing well, and they have allowed authors to do better. Where’s the tension? 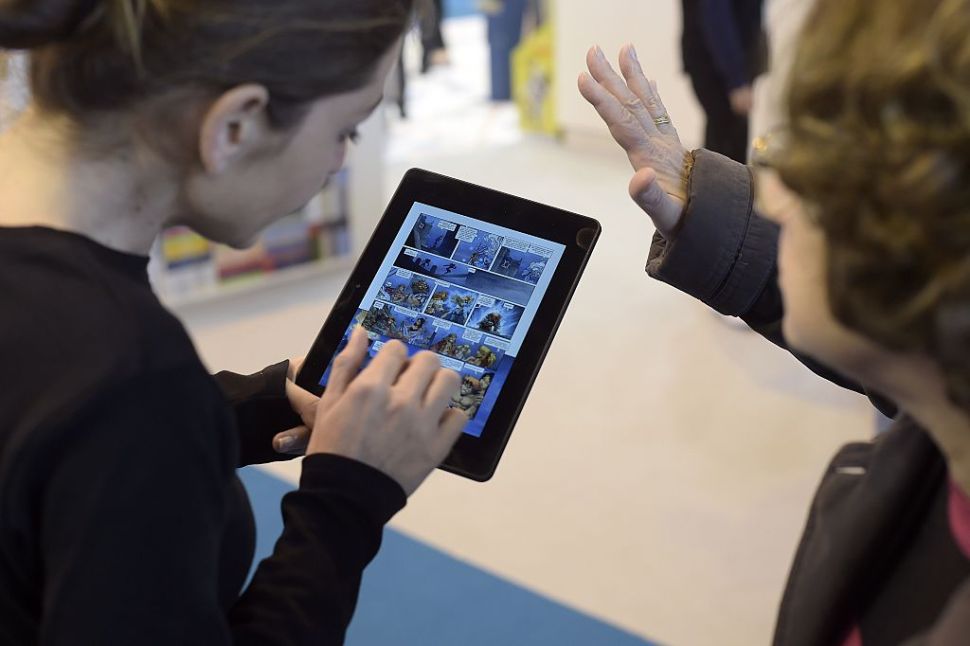