In its fifth year in the airy yet substantial Navy Pier, Expo Chicago this time outdid itself.

While the art fair—the Midwest’s only art fair currently—rose in 2012 from the ashes of Art Chicago, it became a destination for collectors from all over the country and the world in 2016.

“It’s how fairs should be,” said Susanne Vielmetter, head of the gallery that bears her name in Los Angeles. “The jump from last year’s quality to this year’s is the biggest jump,” she’s seen, she said. It’s her fourth year bringing work to the show.

By the close of the first day of the fair, last Thursday, Vielmetter had sold most of the PopeL. works she had brought with her—two to institutions. She had interest of some kind on everything in her booth, she reported.

And, gesturing around the spacious, multifaceted (literally) booth, she explained the appeal of the fair: “It’s very generously spaced; it doesn’t have the frenzy of New York [fairs].” I can’t disagree. Even coming from New York City, I’d rather get to Chicago than to Randall’s Island.

Indeed, many of the galleries were from New York, but their booths boasted more space than they’d get at New York fairs and the lack of crowding made everything easier to see and digest.

“There’s lots of blue chip artists here,” said C. Monique Fuentes, with Paul Kasmin Gallery’s editions booth, which offered prints and pins of an American flag with the phrase “think” emblazoned on them. “But I really like how the emerging art is not sidelined,” she said.

Bryce Wolkowitz was showing the striking environmental photography of Edward Burtynsky, among others. The artist’s work “documents human intervention in nature, the use and abuse of natural resources,” said Joshua Eveland, director of operations for the gallery.

But there was plenty that’s never been on the cover of Art Forum, too.

L.A. gallery Luis de Jesus showed psychedelic pop surrealist videos, for instance. And prices in the editions ranged from $10 (for the pin) to $25,000 (for an Ulay print from Rene Schmitt Gallery). Everyone hawking their wares was friendly and informative.

Even prints and editions felt like part of the fair, not off to the sideline tonally, even if they were, technically, at the side of the building.

“They cover all the bases here,” said Fuentes. And that may be because of the strong presence of institutions on the hunt to fill their collections. Academic museums especially, might be looking at the art less traveled.

Gallery MOMO, a South African outfit, headed to Chicago to be exposed to all the institutions that shop there, said Igsaan Martin, a director there. It’s “the number of museums per square foot; [they need] to diversify their collections,” he said. Vielmetter agreed, calling the fair “a chance to connect with amazing institutions.”

MOMO is opening a non-commercial project space in Capetown in the coming months—its second project space, Martin said. Founded by Mann Mokoena, MOMO is the sole black-owned South African gallery, Martin added, so building a bridge with the world is important.

The gallery, which also brought work to the Armory Show earlier this year, had a Mary Sibande sculpture as the centerpiece of its booth, which attracted consistent photography during the thursday evening vernissage. The South African artist creates life-sized versions of herself, mostly in purple and blue.

Pearl Lam Galleries, which has outposts in Shanghai and Hong Kong, was showing a work of thick paint chunks that won’t dry for another 22 years, explained the gallery’s Rachel Miller. Zhu Jinshi’s Yellow Mountain Temple #2 was difficult to ship to Chicago and cannot be touched yet, Miller said. It will have “settled,” into its final form in a few more decades. Chun Kwang Young’s Aggregation 15-NV074, another three-dimensional work, was a relief map of sorts made of Korean mulberry paper tied into shapes and affixed to a canvas, also on view at Pearl Lam.

And while the fair was global in scope, the regional focus was also strong, as was the presence of thoughtful projects by local non-profit organizations.

“I like to see the Chicago booths, the people who don’t come to New York,” said Tracey Adler, director of the Wellin Museum of Art. She was scouting for things for her institution, but wasn’t sure what she would pull the trigger on yet, if anything. Chicago’s Kavi Gupta Gallery had a massive booth, chock full of blue chip treasures, while the School of the Art Institute of Chicago had a whimsical piece wherein an oscillating fan plays the guitar (but no wall text!).

The Natural Resources Defense Council offered origami rhinoceroses, while the local chapter of Human Rights Watch presented an installation of pillows for sale for $159 each. The cost represented the amount American taxpayers spend each day to detain one undocumented immigrant.

The show’s curated In/ Situ sector, which took installations and performances and sprinkled them throughout the show, the Navy Pier and Chicago also held highlights, such as Narco Headlines, from Julio Cesar Morales, and a room for Hank Willis Thomas’ For Freedoms, a super PAC (and also an artwork in and of itself) to fund art, that he formed earlier this year.

Narco Headlines was a recreation of a text work, and the large words loomed over the rest of the art, somewhat ominously, as buyers and dealers dealt in a legal but just as abashedly opaque trade. Words like “Ketamine Holy ” and “Cocaine Butt Implants,” overhung the espresso stand and the entrance to the bathroom.

If this year was the best yet (and most dealers we spoke with did seem quite pleased with their haul) maybe Chicago’s rough history as an art fair host can finally be put to rest. After all, you don’t have to stay in pricey London or New York to art shop. As Vielmetter said, “what you get for your money here is amazing.” Seems true for tourists and gallerists alike.

Plus, for many art worlders, it’s really nice to see art in a context where not everyone has a BMI under 19. 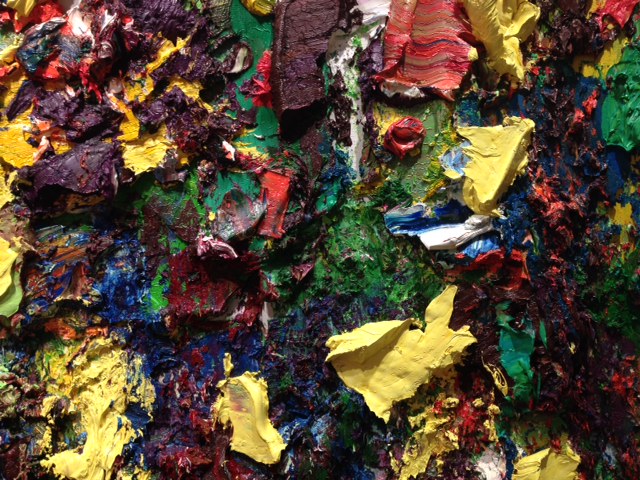