It’s hard these days to make a show that breaks through to capture the viewer, given the literally hundreds of other shows out there vying for your attention.

I was expecting the new series This is Us to be just another family drama, and it is that, but it’s actually a lot more than just blood relatives moving through the everyday conflicts of life. It’s not often that my opinion of a series bounces around a lot as I watch the pilot and with this one, it definitely did—and that’s a good thing, a very good thing.

At first, I felt as though this was just simply about a few different families and the way the parents and/or siblings connect with each other within those units. I’m not saying this is a bad thing. In this day and age of dark anti-heroes, superheroes and reboots, it was immediately refreshing to see something a bit more relatable. I mean seriously, everyone has family that they have to deal with.

But that, as the pilot lays out, isn’t all this show is going to be about going forward.

Opening with the premise that everyone in the world shares their birthday with approximately 18 million other people, the narrative introduces four people who on this day are celebrating their 36th birthday on this day. They are Kate, Kevin, Jack and Randall. Each one of them is on their own path—Jack and his wife are expectant parents, Randall, is searching for his father who abandoned him as an infant, Kate, is struggling with her weight, and Kevin, is struggling to be taken seriously as an actor given his pretty boy looks.

The juxtaposition between Jack starting a family and Randall trying to find connect with his father is immediately intriguing as is the fact that while Kate struggles with body image for one reason, Kevin is grappling with the same issue but in a very different way.

On the surface, This is Us feels like a bit of a saccharine drama meant to give us ‘all the feels,’ but by the end of the pilot you realize that while this may be true, it’s not the only thing happening here.

The series has been compared to Parenthood and yes, some of the same elements are present in the storytelling, but given the absolutely amazing (and hopefully unforeseen by all) twist at the end of episode one, there can be only peripheral links drawn between This is Us and Parenthood. (And, if you didn’t care for the rapid-fire dialogue of Parenthood, you’re in luck here. This is Us seems to understand the need to often let dialogue flow and breathe.)

Many series struggle in their opening installment as they set up their premise in a clunky manner and initially that’s a little true here, but by the last quarter of the episode a kind of fascination about where this series can go sets in and all of that awkwardness is pretty much forgotten.

Obviously the stellar writing of the series creates the foundation for all of the emotional elements so here’s a shout out to that team, but it’s the cast here that really helps to elevate the material. It’s fun to see Milo Ventimiglia and Mandy Moore, who were once teen stars, all grown up as Jack and his wife Rebecca, giving great performances, Chrissy Metz and Justin Hartley are also excellent as Kate and Kevin, while Sterling K. Brown shows that his recent Emmy win was more than well-deserved. Brown in particular shines in one scene when Randall can’t seem to quite figure out his own emotions as he tries to explain to his wife what he’s feeling. That scene sort of sums up how viewers might feel as they watch this episode unfold.

During the course of an hour, you might find yourself, laughing, cheering, confused, elated, heart-broken and completely drawn in, and if you enjoy all of this, it means that This is Us may just be that show that has absolutely crashed through the clutter. It certainly has all of the necessary components, and then some, to be a show to do just that. 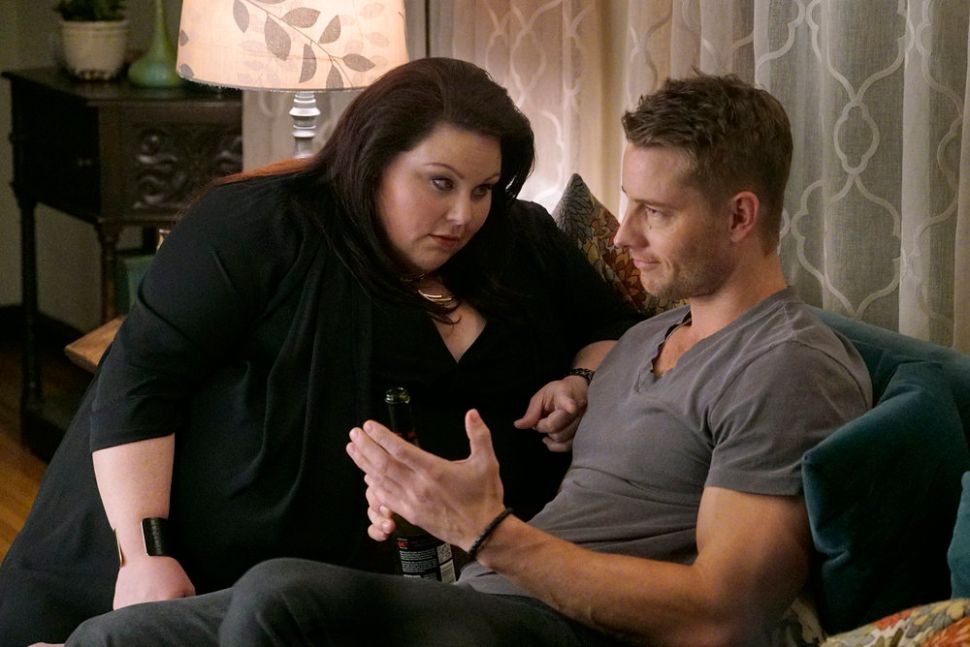 Filed Under: Entertainment, TV, TV, NBC, This is Us