“We have smoke on board—I can’t see anything” were the panicked, halting words transmitted from the cockpit of Swissair Flight 330 shortly before it hit the ground. Less than a minute later came the final message from the captain: “We are crashing—goodbye, everybody.” Then the four-engine airliner, a Convair Coronado, came down hard in a forest near Würenlingen, west of Zürich Airport, where the airplane had taken off less than 20 minutes before. There were no survivors.

The crash of Flight 330 on February 21, 1970, which killed 47 people—38 passengers and nine crew—remains the deadliest terrorist attack in Swiss history. Nine minutes after takeoff, shortly after the Coronado passed 14,000 feet on its climb-out from Zürich, a bomb exploded in the rear cargo hold. As the jetliner lost cabin pressure, the flight crew vainly tried to save their aircraft. Their efforts were stymied by smoke which blinded the pilots, dooming them and their passengers.

Although the outlines of the bomb plot were uncovered within weeks of the disaster, nobody was ever arrested for this mass murder. Rumors of a cover-up have circulated from almost the beginning. Now, more than four and a half decades later, new information has come to light which may dramatically alter the story of what really happened to Flight 330.

Swiss media this week is abuzz with revelations from a declassified American intelligence assessment which points the finger at one or more groups who may have assisted the Middle Eastern terrorists who blew up the Swissair jet. The truth about what befell Flight 330 appears to be far more complicated than anyone might have guessed.

First, the facts. The bomb which brought the Coronado to earth was placed inside a radio and had a barometric pressure trigger designed to explode at a fixed altitude. On the very same day that Flight 330 was destroyed, an identical bomb detonated in the cargo hold of an Austrian Airlines Caravelle jetliner shortly after takeoff from Frankfurt, West Germany, bound for Vienna. The lucky pilots managed to land their aircraft safely back in Frankfurt, with a hole blown through the fuselage. The Caravelle’s 33 passengers and five crew survived unscathed.

It was immediately apparent that the same terrorist cell was likely behind both bombings. Palestinian terrorism was new on the scene in 1970, having captured the world’s attention with a wave of airplane hijackings and bombings across Europe and the Middle East. Western intelligence agencies were on the lookout for Palestinian terrorists—Fedayeen as they termed themselves—who sought to make war on Israel and its friends.

Suspicion soon fell on the Popular Front for the Liberation of Palestine—General Command, a radical terrorist group that was founded in 1968 by Ahmed Jibril, under Syrian patronage. Practically an appendage of Syrian intelligence, PFLP-GC had cells operating in several countries in the Middle East and Europe and specialized in attacks on airliners. That Swissair Flight 330 was bound for Tel Aviv made it a logical target for Jibril’s killers.

Before long, investigators in Switzerland and West Germany determined that the bombs which exploded on February 21 had been assembled by a PFLP-GC cell operating in the Frankfurt area. They were disguised as mail packages being sent to an address in Israel—a fake address, as it turned out. Police were looking for four Palestinians known to be affiliated with the PFLP-GC: two Jordanians, Sufian Radi Kaddoumi and Badawi Mousa Jawher, plus their helpers Yaser Qasem and Issa Abdallah Abu-Toboul. The men had purchased several altimeters in Frankfurt and were the prime suspects in the bombings.

They had fled to the Middle East, however, out of the reach of European police. Swiss authorities never seemed especially motivated to find them either, leading to longstanding whispers of a conspiracy, perhaps even a back-room deal between Swiss officials and the PFLP-GC to ignore the wanted men in exchange for no more Palestinian terrorism against Switzerland.

That Switzerland may have something to hide is illustrated by the suspicious case of Marwan Khreesat, a top PFLP-GC bomb-maker whom investigators early on believed played a key role in the downing of Flight 330, but strangely he was never officially considered a suspect. Only two decades later, when Khreesat was a suspect in the bombing of Pam Am Flight 103, which was blown apart over Lockerbie, Scotland on December 21, 1988, killing 270 people, did Swiss authorities seem to acknowledge that Khreesat had a hand in the downing of Flight 330. Even then, nothing was done.

The Palestinians suspected they had been played by the ‘West Germans’ too.

Therefore, significant unanswered questions linger in the Swissair case—including who was really behind the bomb plot. The investigation has now been blown wide-open by the sensational revelations contained in an intelligence assessment produced by the Federal Bureau of Investigation way back in June 1970.

Titled “The Fedayeen Terrorist—A Profile,” the short document, just seven pages of text, was classified Secret and intended for internal FBI use only. The study was declassified and released, with minor redactions, back in 2008, under a Freedom of Information Act request, but Swiss journalists only took notice of it recently.

The FBI’s assessment offers guidance to field agents regarding the rising problem of Palestinian terrorism. Among the points addressed are terrorist tradecraft, choice of weaponry, and general modus operandi—including the involvement of non-Arabs in Fedayeen terrorism. Its information is derived from diverse intelligence sources which are never explicitly mentioned but which shed light on terrorist incidents that were recent when the FBI study was put together.

One of the cases discussed in detail is the downing of Flight 330, and here’s where things get interesting. The FBI write-up of the attack pins it on the PFLP-GC, specifically Kaddoumi and Jawher (although their names have been redacted, it’s obviously them, based on what Swiss authorities have released from their own case files), including that they assembled the bombs that wound up on the Swiss and Austrian jetliners on February 21 of that year.

However, according to the FBI, the prime movers of the attacks were two unidentified West Germans, who contacted the PFLP-GC at their headquarters in Amman, Jordan, in September or October 1969. They showed up unannounced, claimed to be sympathetic to the Fedayeen cause, and wanted to help. As the FBI study explains:

One of them was an electrical engineer and PFLP-GC sought his advice on electrical problems connected with explosives, which he readily provided. They then returned to West Germany, and PFLP-GC maintained contact.

The two mystery men played a pivotal role in the downing of Flight 330, as the FBI knew:

On February 10, 1970, the West Germans were contacted in Frankfurt by [Kaddoumi] and [Jawher], two PFLP-GC members who had flown to West Germany on a terrorist mission. A discussion was held as to what device should be used to blow up a plane. One of the West Germans suggested an altimeter rigged to an explosive and set to give an electrical charge at 3,000 meters. All agreed that this was a satisfactory technique. The altimeters were then purchased in Frankfurt and the West Germans helped the terrorists wire them to the explosives which were then placed in a hollowed-out used radio set and packaged for mailing to Israel.

In other words, two unidentified West Germans reached out to the PFLP-GC, offered their help with terrorism, then provided their expertise on how to blow up civilian airliners in midflight. The mystery deepens, since the FBI notes that, after the downing of Flight 330, the West Germans disappeared. Even the PFLP-GC could not locate them, despite several attempts.

Who were these mystery killers? Where did they come from—and where did they go? They had expertise in bomb-making, including the use of barometric triggers, that was awfully rare back in 1970. It’s certainly possible that they were radical Left terrorists. Those were plentiful in 1970s West Germany, when groups like the Red Army Faction, more popularly termed the Baader-Meinhof Gang, unleashed mayhem and murder, becoming the darlings of the radical chic set. Moreover, top RAF members trained in Palestinian terrorist camps in the Middle East.

All the same, the RAF’s bomb-making skills were never all that impressive, and they were downright primitive back in 1970, when the group was just getting started. It ought to be considered that the mystery men were really from East German intelligence, the notorious Stasi. They had strong links to radical Left terrorist groups in West Germany, including the RAF, to whom East German spies gave aid, training, sanctuary, and even weaponry. Stasi support for terrorism was real back in the 1970s—but we have no hard evidence of an East German link to the downing of Flight 330, only speculation.

The Palestinians suspected they had been played by the “West Germans” too. According to the FBI, one of the PFLP-GC operatives (presumably Kaddoumi) detected an Israeli hand behind the plot. From the safety of Amman, after his escape from Europe, he stated that their anonymous helpers were actually Israeli agents who had reached out to them to keep the bombs off El Al jetliners while tarring the Palestinian cause with mass murder.

Seeing an Israeli false flag behind the downing of Flight 330 sounds fanciful, even allowing that terrorists are paranoid by their nature—especially Arab ones, who see Mossad lurking in every dark corner. That said, any reinvestigation of the case would want to examine any possible foreign intelligence ties to this mass killing, even if only to rule them out.

Is a serious relook at the Flight 330 massacre possible, so many decades later? Based on Swiss reports, Sufian Kaddoumi died in Jordan several years ago, while Badawi Jawher may not be in Jordan at all. All traces of him have gone cold. Marwan Khreesat lives in Jordan too. Just two years ago he was boasting on Facebook about his bomb-making exploits for the PFLP-GC back in the 1970s, while bizarrely posting photos of the Lockerbie disaster.

The best source of information for anybody wanting to know what really happened to Flight 330 may be American intelligence files. The FBI’s assessment was clearly derived from solid spy information on the Swissair case (to the trained eye, it looks like some of it comes from signals intelligence from the National Security Agency, which the FBI masked to protect sources and methods). Perhaps when those classified reports are eventually released to the public the full story of how and why 47 innocent people died will be known. 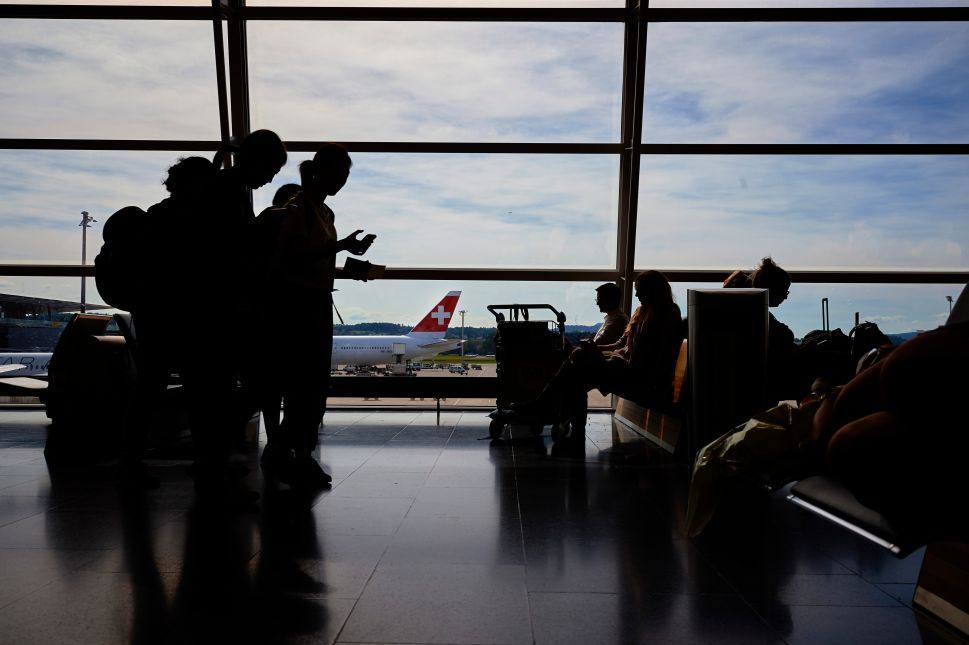