With his latest plan to punish even thoughts and speech related to climate change, New York Attorney General Eric Schneiderman has raised the eyebrows of even his fellow climate-change activist Democrat attorneys general (AG).

Officials from a number of state AG offices expressed anxiety about Schneiderman’s controversial plan to investigate and possibly prosecute not only energy companies, but think tanks, for challenging the science underpinning some of the more alarmist statements coming from the Al Gore camp of the party on climate issues. Newly-released emails, obtained under freedom of information laws, reveal a level of discomfort with Schneiderman’s strategy.

Ironically, as Schneiderman sought to line up AGs to join a coalition to use anti-racketeering laws to silence individuals and institutions for expressing views skeptical that human beings are causing catastrophic global warming, numerous AGs who Schneiderman targeted as allies acted more like cautious co-conspirators. They warned his staff not to put much in writing, to assume state open records laws would expose their radical tactics, and pointedly asked Schneiderman to “dial back” language suggesting they were joining the coalition.

It’s not that they didn’t agree with him on climate change. Rather, it seems they were concerned about potential abuse of their enforcement powers if they got roped into Schneiderman’s scheme.

The emails, released by the Energy & Environment Legal Institute, shed new light on the level of discomfort some AGs had even before declining to join the flailing coalition.

Immediately following a March 28 “happy hour” hosted by Schneiderman’s office to discuss their plans, Iowa’s Deputy Attorney General Tam Ormiston wrote to his colleagues, “I will update you tomorrow but clearly Eric is himself the wild card for all.”

Iowa AG Tom Miller wasn’t an eager participant either. Ormiston’s co-worker wrote “Tam — Just talked with Tom. He thinks we may be locked in on this and have to ride it through.”

Elsewhere, we see Scot Kline, the chief environmental lawyer in the office of Vermont’s Attorney General William Sorrell, writing to Peter Washburn in Schneiderman’s office, asking that the language be toned down. Kline tells Washburn to “drop the word ‘investigations’ from” the letter Washburn was trying to get all participants to signs. Kline says “Not all of the states have yet opened a formal investigation and there is some sensitivity here (and I suspect in some other states) to saying or indicating we have.”

Emails sent yesterday from the Observer to Mr. Kline asking for comment were ignored. If he chooses to respond, this story will be updated.

Perhaps they realized the hypocrisy of standing alongside Al Gore at Scheiderman’s March 29th press conference, alleging misleading statements had been made for self-enrichment.

For years, Mr. Gore, who predicted that the North Pole would be ice-free by 2013, has cried wolf about the coming environmental apocalypse — while lining his own pockets with millions by promoting dubious green investments often supported with tax dollars.

Turns out, Iowa’s Miller didn’t ride it through. Schneiderman’s own documents now reveal that Miller was no longer engaged, participating in neither in the “Exxon/Fossil Fuel Company Investigations” nor the “Roadblocks to Renewables” working groups, according to documents.

Even one of Schneiderman’s go-to allies, U.S. Virgin Islands Attorney General Claude Walker, put the brakes on his investigation.

“These emails help explain why Schneiderman found himself going from seventeen Doppelgängers one day, to being almost completely alone within mere weeks of his bombastic ‘publicity stunt‘ press conference with former Vice President Gore,” said Chris Horner, senior legal fellow for E&E Legal. “His untethered political crusade was just too much for even like-minded activist AGs he personally selected. We now know they saw the warning signs early.”

Perhaps Schneiderman realizes that New Yorkers will let him get away with abusive prosecutorial tactics that get zero results.

For years, Schneiderman has used the same playbook to bully profitable companies and garner headlines without actually helping his constituents. Unless, of course, those constituents are donors such as George Soros, the New York Trial Lawyers Association, or green energy interests.

Perhaps Schneiderman realizes that New Yorkers will let him get away with abusive prosecutorial tactics that get zero results.

After Schneiderman lobbed fishing-expedition subpoenas at energy drink companies in 2012, Rick Collins, a former Nassau County prosecutor, told Natural Products Insider that Schneiderman “may well be in over his head.”

Indeed, nothing came of the expensive investigation. Schneiderman got good press at the start, and was never held accountable when he came up empty. The media fell for Schneiderman’s ploy, hook, line and sinker.

It wasn’t a fluke. A similar fact pattern played out when Schneiderman went after Walmart, Walgreens and Target for selling supplements. In that case, Harvard Medical School’s Dr. Pieter Cohen, a leading critic of the supplement industry, called out Schneiderman for bungling the science by using the wrong testing method.

Maybe he can get away with it in New York, but the newly released emails reveal that even Schneiderman’s fellow liberal AGs were uneasy about his shrinking climate change coalition.

Jeff Stier is a senior fellow at the National Center for Public Policy Research. 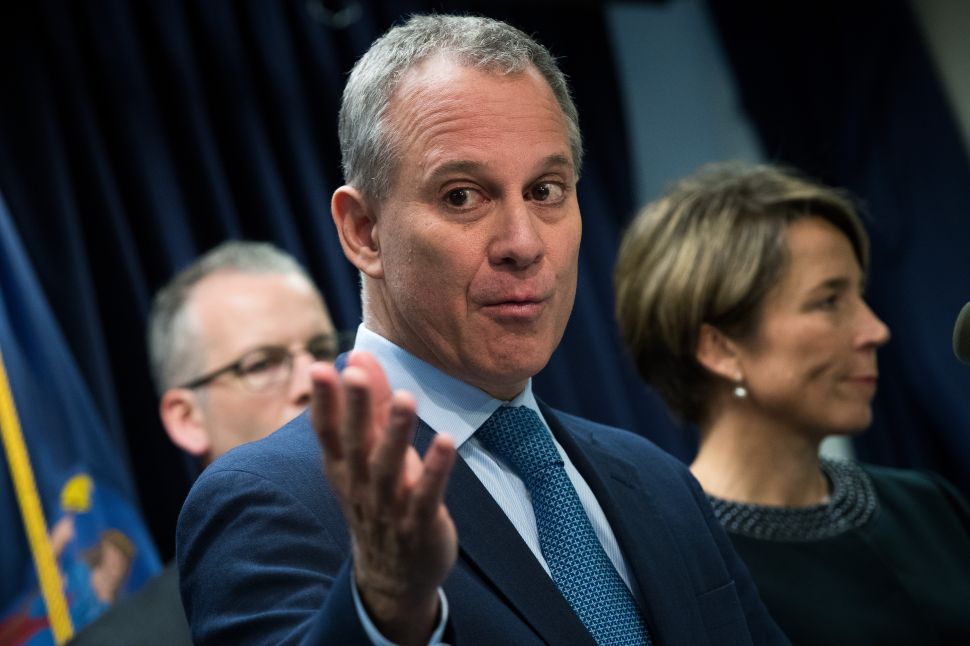