Tonight’s televised presidential debate will likely attract a U.S. television audience that will rival the finale of MASH and the moon landing.

To put it simply, no one is tuning in to watch Hillary Clinton — not even her supporters. Everyone wants to see what Donald Trump does. I cannot remember a presidential debate with this much hype, anticipation, and importance in my lifetime. The only thing that perhaps rivals it is the Reagan-Carter debate in 1980.

Trump walks into Hofstra University, where Barack Obama and John McCain debated in 2008 and where President Obama and Mitt Romney debated in 2012, with the wind at his back. The race has narrowed, with battleground states moving in his direction and Clinton’s lead now down to within the margin of error. A Trump win seemed unthinkable a month ago — now it is at least plausible.

In a change year, Trump is the change candidate. Clinton is a lot of things, but she is not a change agent after eight years of Obama.The question for voters, particularly swing voters in battleground states, is whether Trump offers too much change. They need to know if he is an unacceptable risk.

Trump can win this debate by not losing it. This will require discipline, self-control, patience, and calm. These are not his natural strengths. Serious, thoughtful debate prep would have benefitted him, but he appears to have been wholly unwilling to commit to it. This may prove to be a politically fatal error.

Trump likes to call himself a counterpuncher. But not every jab needs to be countered. I expect Hillary to jab and uppercut constantly. Her team appears to believe the only way she can win the debate is by invalidating Trump as a legitimate choice.

This approach has risks: She may appear too negative, too harsh, too shrill or too unlikeable. Likability is a real factor in how viewers evaluate debates. Emotions, nonverbal communications, posture, and facial gestures all play a role in how a candidate is perceived in the television era.

The central challenge facing both candidates tonight is that they must directly address their own weaknesses. Trump needs to convince a solid plurality of voters that he is a credible president by demonstrating that he has the temperament, the leadership, the knowledge, and the vision to sit behind the resolute desk as our commander-in-chief and head of state. Standing on a stage next to Hillary Clinton will naturally raise his stature, much as his bilateral meeting with Mexican President Enrique Peña Nieto did several weeks ago. Still, can Trump look presidential? Can he ride the wave in a change election? These are important questions.

Conversely, Hillary must finally address legitimate questions of honesty and ethics. Will she directly, clearly, and honestly answer questions about her private email server — why it was created, what were the risks it posed to national security, and why she deleted 33,000 emails. Will she answer allegations about selling access and favors at the State Department to wealthy Clinton Foundation donors? Will she demonstrate, over 90 minutes with no commercials, that she has the strength and stamina to be president, and finally put health questions behind her?

These are the issues she needs to put behind her to pull away from Trump.

Trump will be in an entirely new situation. The primary debates are irrelevant to the current task. Back then, Trump was speaking 12-15 minutes over two hours, with eight other candidates, several moderators, commercial breaks and loud, boisterous audiences to feed off their energy.

This debate will consist of just three individuals: the two candidates, and moderator Lester Holt of NBC News. The crowd will be there, but it will be silent and mostly invisible. The candidates will likely be unable to see them once it begins, due to the lighting necessary for television. Trump will be speaking for 30 to 35 minutes. Does he have that much substance? Can he remain disciplined for that long?

Trump is likely to benefit from low expectations for his performance. Described by the Clinton campaign as temperamentally unfit, if Trump just appears normal, then this debate may be judged a victory for him.

An early knockout in this 12-round heavyweight fight is unlikely. The most likely scenario is a race to the bottom, where both candidates deflect when pressed on their own weaknesses, choosing instead to attack each other.

This may be the single nastiest presidential debate in US history.

Could both candidates lose in a scoreless tie? 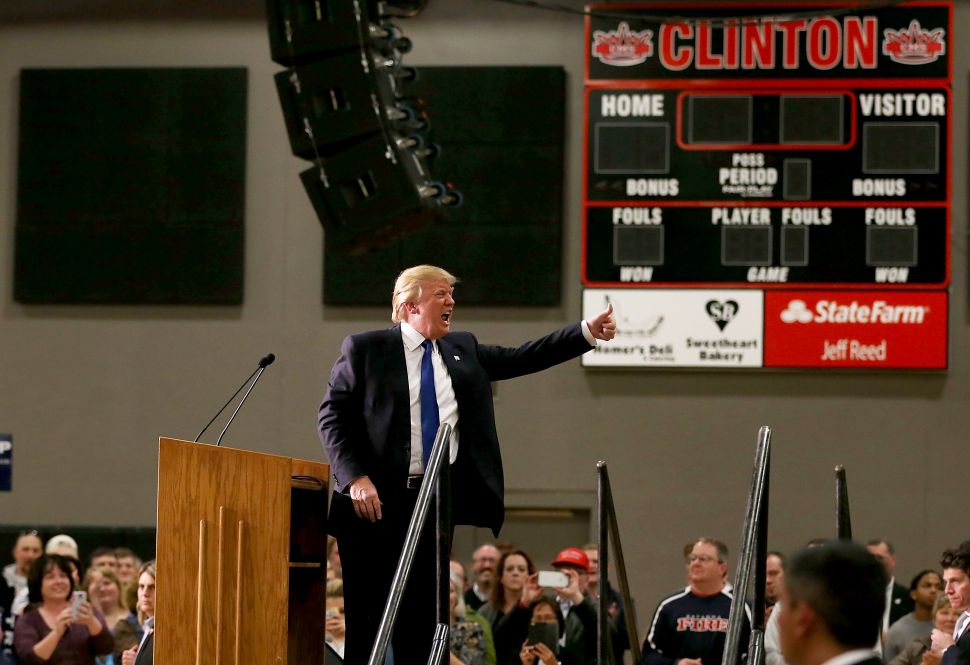