Throughout the race to the White House, many internet jokers have created parody Twitter accounts for the presidential candidates on any number of topics. Recently, however, one issue has divided these satirical social media pages more than any other: movies.

It all started, of course, with the Donald: ArtHouseTrump was created in March, but has only started picking up steam in the past couple of weeks. The account, on which the Republican nominee gives advice on how to “make cinema great again,” already has over 6,700 followers, and should get more now that he’s commented on Brad Pitt and Angelina Jolie’s divorce:

I blame By the Sea

Best possible news! Loser Netflix can bungle this trash like they did Beasts of No Nation Oscar campaign!! https://t.co/QsUTsvv9Il

I have never seen a confident man take a film studies class!

No Talent Woody understands the importance of optics about as well as Crooked Hillary! Bad! pic.twitter.com/d2smbrHi7R

Media a bunch of lying disgusting animals! Just watch Network to see for yourself! Unbelievable!

Trump’s Democratic opponent joined the party yesterday—but ArthouseHillary’s opinions on film are more cerebral than those of her Republican foe, which may be why she has only 116 followers:

Vote for something, not just against:

High resolution, not resentment.
Answers, not Angry Birds.
Bridge of Spies, not walls.

Halle Berry was born in America, plain and simple.

Donald Trump owes her and the Academy an apology.

I miss The Good Wife. I will fight to expand more episodes for the public.

Libertarian candidate Gary Johnson soon got in on the action, with ArtHouseJohnson demanding to be included in the cinema conversation just as his real life counterpart wants to be seen on the debate stage (though that’ll be a hard sell given that he has only 22 followers):

I really think I should be part of this discussion with @ArthouseHillary and @ArtHouseTrump. The American people deserve that at least.

Even Dr. Jill Stein took a break from tweeting about Harambe to join the social media slugfest—however, ArtHouseStein, with only 11 followers, seems to have the same trouble connecting with people as the real Green Party candidate:

Oliver Stone should be pardoned for @SnowdenTheMovie misfire. The man who brought us JFK deserves another comeback opportunity.#grassyknoll

The Secret Life of Pets was a powerful reminder to be a voice for voiceless animals. End mammal captivity for entertainment!

Other senators may have lost the election in the primary stage, but they’re not letting that get in the way of their film criticism. ArthouseSanders and ArtHouseCruz have popped up on Twitter in the last 24 hours, aping the personas of their real life political counterparts:

I voted against Crash for Best Picture, my opponent @ArthouseHillary voted for it, Crash is the most disastrous best picture winner ever

Despite how inaccurate David Fincher's Zodiac is to my actual story, it's still my favourite movie of all time #StillHaventBeenCaught

Dexter and Ramsay Bolton are the characters that speak to me on a personal level the most. Although, Dexter is a pussy for having "feelings"

The accounts have also started interacting with each other, ensuring a cinematic bloodbath to echo the political one: 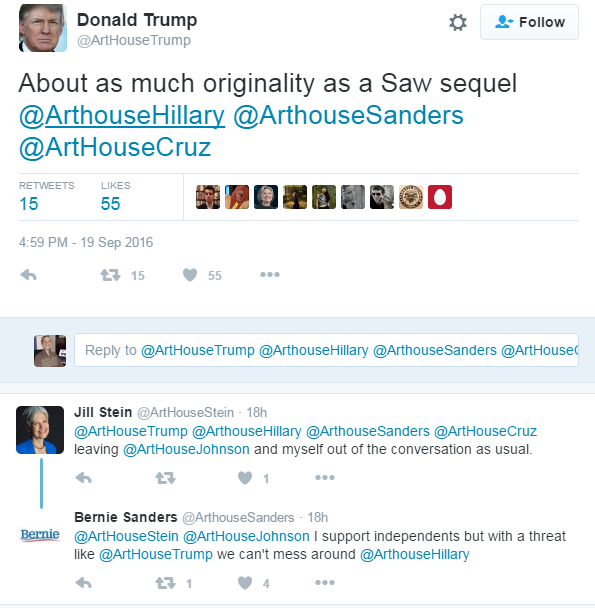 If only real presidential debates were this entertaining. Screenshot: Twitter

Ah, parody accounts: all the fun of presidential elections without the Skittles memes.