A few months ago, I was suspected to be a drug mule. My boarding passes hasn’t looked the same since.

I was traveling back to the U.S. from Mexico, and since I was there reporting for work, I was alone. Apparently, this is a huge red flag because I was taken to a back room for interrogation and thorough screening of my luggage. While one TSA officer looked me up in their system and quizzed me on my lifetime travel history, another proceeded to empty all of my belongings out onto a table and search each one with dedication. He found pamphlets from the tequila distillery I said I was writing about and pointed out that my story for being in Mexico checked out, but this didn’t stop him from investigating each individual sock and removing the lining from my suitcase. This went on for an hour and I just barely made my connecting flight.

I’ve flown a few times since this incident, and each time I’ve noticed more scribbling on my boarding pass. I began to wonder, am I flagged? Am I on some kind of list? I wanted to know what the different marks TSA officers write on boarding passes mean, so I asked a former agent as well as a security expert.

“Usually, the scribble you see on the ticket is the initials of the officer who checked it,” Jason Harrington, a former TSA agent who keeps a blog on the topic and penned the confessions series “Dear America: I Saw You Naked” for POLITICO, told the Observer. “Then, depending on the airport and the management at the airport, there may also be further information, such as the number of the checkpoint. So if I, Jason Harrington, am working [the travel document checker (TDC) position], and I check your ticket at O’Hare on checkpoint 2, I would scribble ‘JH CP 2’ on it.”

Security expert Bruce Schneier, who’s authored more than a dozen books, confirmed this but pointed out something interesting. “It’s all weird, since they let phone boarding passes through with no marks,” he said.

So if you can go through security sans scribbles if you use your phone, do these TSA marks really mean anything? And even when boarding passes are marked, it’s so illegible it’s doubtful anyone can decipher it.

Harrington explained that most TSA officers intentionally write illegibly to cover their own backs incase they let through a passenger who is classified as “SSSS,” the only other mark you might see on a boarding pass. It indicates a passenger is a higher risk and needs to go through additional screening.

“Here’s the thing,” he said. “For an officer who knows he or she might get terminated for letting an ‘SSSS’ ticket go by, there is no incentive to clearly write his or her initials on that ticket. If there is just an illegible scribble on the ticket, then local management can’t track the ticket back to the TDC officer who checked it. So when I was there, I did my best to just scribble random illegible shit, so that if I happened to miss a quad S, no one would know it was me who missed it, and I wouldn’t get written up or fired.”

If that’s not enough to make you question what TSA officers are writing on your boarding passes, Harrington’s other anecdotes might.

“Sometimes I just wrote a smiley face on the ticket in blatant disregard for the whole ‘officer must write his or her initials on the boarding pass’ rule,” he said. “In my younger days I scribbled my phone number on a beautiful woman’s boarding pass, if I was feeling really crazy and resentful of management.”

He stood by the smiley face bit but soon retracted the part about the phone number.

“Well actually, I couldn’t have written my phone number on any passenger tickets. That would have allowed managers to track me down easily. I misremembered that. But you get the idea with the scribbles and the arbitrary nature of many of those scribbles.”

We reached out to the TSA for their take on this. Spokesperson Lisa Farbstein gave us the following comment: 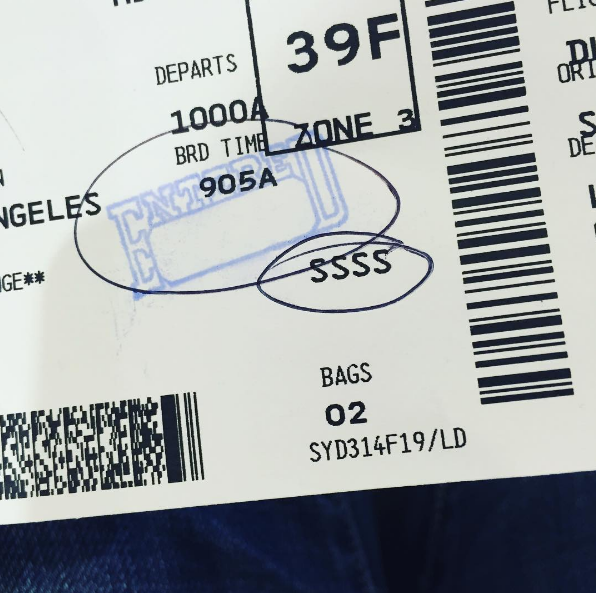