With stars like Kristen Stewart, Michelle Williams and Laura Dern, Kelly Reichardt’s Certain Women won’t get lost at this year’s cinematic free-for-all, the Toronto International Film Festival. Opening today, the Canadian festival (along with Telluride and Venice), launches the Awards Season while marking the end of the summer’s exploding landmarks and superheroes. Getting lost is a recurrent theme in Reichardt’s work, and her female-driven small scale, keenly observed, almost glacial drama traces the intersecting lives of small-town women who refuse to smile for the camera. A lawyer, a teacher, a wife betrayed, a rancher: they experience moments of grace and disappointment that are as intense as they are underplayed. Despite the film’s quiet fury—or perhaps because of it—the major miracle here is Reichardt herself, a female director who, at 52, has etched out six highly personal films running against the grain not only of Hollywood but of the independent star-making machine. A telling dozen years passed between her first feature, River of Grass (1994), and her second Old Joy (2006), which was followed by Wendy and Lucy (2008), Meek’s Cutoff (2010) and Night Moves (2013). And, yet, now, as the Florida native who teaches at Bard College discusses her career exclusively with the Observer, she seems to have, in her fifties, mellowed a bit and achieved a level of filmmaking wisdom and consistency that provides a larger lesson to women still struggling against the tide in the film business: You have often been described as angry—has that helped or hindered you progress? You have to be angry or crazy. Never read about your self is my rule. A friend would call it my beef—and now my beef with the world is much less. It used to be so big it was almost a second person. Your first feature, River of Grass, competed for four Independent Spirit Awards and the Grand Jury Prize at Sundance in 1994—and then you didn’t make another feature for over a decade. What happened? Before I made my first film, River of Grass, I worked on a lot of small 8mm films in art school in Boston. I just naively made art and—what a bougie thing—didn’t realize the full impact of what it was to be a woman and trying to make film. After Sundance it hit me like a tidal wave. I just wasn’t expecting the push back and I took it really personally—that is what sexism is. It took me like a decade to recover from it. And so I started looking for my own way in the years afterward. Seeing the guys who I had been to Sundance with making their second and third films and me trying to get a second film made I really had my dukes up for sure. I went back to Super 8. I thought this competition isn’t going to make me a happy person so let me find a way that I can hold a camera in my hand and get better at it without being at the mercy of everyone. I asked myself: What do I want?

“I thought (Sundance) competition isn’t going to make me a happy person, so let me find a way that I can hold a camera in my hand and get better at it without being at the mercy of everyone. I asked myself: What do I want?”—Kelly Reichardt

And what did you answer? I want to be able to make film. I returned to super 8 and I started teaching. I had no more thoughts of making feature films. And, yet, the avant-garde world is a less narrative world so I didn’t fit there, either. I’m such a narrative filmmaker; I really had no affinity for it. So then I did the short, Ode, a narrative on super 8. These were sketchbooks for life and trying to get better at something. I wasn’t thinking that these films needed to be seen. https://www.youtube.com/watch?v=1_Lznehy2-s What returned you to feature filmmaking?  My great aunt (God bless her) passed away and left me $30,000. Suddenly I had money to make something a little bigger. I had just read Jon Raymond’s novel The Half-Life. I wrote him and asked if he had any stories that could be shot outside on location to shoot 16 not 8 —a short or a feature, I wasn’t sure. It was just that again I had money to make something. I had so dropped out of being in any [film] world whatsoever. I made Old Joy with a crew of six, two actors and my dog, Lucy. That did end up going to Sundance and it did end up being a feature length film. After I made that, Jon had the idea for Wendy and Lucy, which was made for 100-to-120 thousand. Every film to this moment seems like the last. Has your gig as a Bard teacher given you the stability (and health benefits) to continue making art? Bard has been a big influence. They want everyone who’s there to be creating. There’s a real effort for everyone to help each other out. The reason I specifically teach there is that it employs really inspiring filmmakers, like the late Peter Hutton, whose work is different and challenges me as a filmmaker. Having a salary and benefits I can completely make films. If you’re making small personal films it’s not a living. Teaching and working in this way I really don’t know about the industry because I’m in my little cocoon. I keep trying to figure out my own way to make work that makes sense to me.

“I was asked to be part of a Hal Ashby documentary with the premise that Ashby is overlooked. I love Shampoo but my first response was Hal Ashby overlooked: really? Barbara Loden is overlooked.”

Do you identify yourself as a female filmmaker—or struggle with that label? I try to stay away from things that are purely built around the festival for women. It feels ghettoizing to me. I have my dukes up about it. Every time I watch a history of cinema—or a documentary on film—it will show eleven men talking about movies that are made now and include no females and no one of color. Systematically women are left out of the history of film. But, at the same time, I’m bad because I’m not a good interview. I was asked to be part of a Hal Ashby documentary with the premise that Ashby is overlooked. I love Shampoo but my first response was Hal Ashby overlooked: really? Barbara Loden is overlooked. It’s a complicated question because I find myself having to work really hard not to see things through the filter of ‘that happened because I’m a woman.’ I can be very dogmatic by looking at things through the filter of ‘ that would never happen to a man.’ Can you share an example?  I’ll hear an interview and people will discuss talk how genius some male filmmaker is—”he didn’t talk to me all day and then I realized that was his genius.” There’s no way a woman could do that on set. You wouldn’t be called a genius. When I was shooting Meek’s Cutoff using a square frame (not like I invented that) I had to bring in Todd Haynes to explain to one of the actors, whereas if Todd did it then it would have been hailed as genius. Or if the close-up is on the people that don’t have the dialog: If Spike Jonze did that it would be genius. It’s such a layered thing but over time some of my biggest supporters are men—Todd, Gus Van Sant and Larry Fessenden who’s been a great ear even though our films are so different. One of your biggest collaborators is Michelle Williams, the Leo to your Marty. I feel guilty she’s so easy to work with it feels like a cheat sometimes. I have a vocabulary with her because we’ve worked together so much. When you’re first working with an actor it’s a real dance, actors have to be so vulnerable, and who’d walk on the set with someone you don’t know and be full of trust? I don’t know why Michelle gave me trust in that moment before I earned my stripes, although she’s seen Old Joy. She’s an opinionated person and a person with a lot of ideas but she will ultimately trust you. She’s a good listener and she has good instincts. When we were making Wendy and Lucy, those were really hard times for her, her life was about to break open in a whole new way. During that movie we didn’t have a trailer for her and she was sitting on the side of the road on an apple box and enjoying being part of the crew. She still had that kind of freedom: no one was walking up to her saying, “Are you Michelle Williams?” With your sixth film playing Toronto following its Sundance premiere, have you mellowed? The key thing is I don’t really need to have my dukes up anymore. This is about age. I don’t have to defend everything I’m doing anymore. It’s a process of learning there are other modes to work in. I think I’m a good collaborator. I know that I feel super grateful to work with the people I work with. I’m not so angry. I’m not some raging bitch on the set. The angry thing comes from the constant questioning as if you’re teaching for a living that you somehow missed the mark where you should be. Being at Bard puts me in a world where I feel like I’m in a constant conversation about film that I find challenging and that keeps me turned on. As if having Hollywood come calling is everybody’s dream. As if that door is open to everybody. 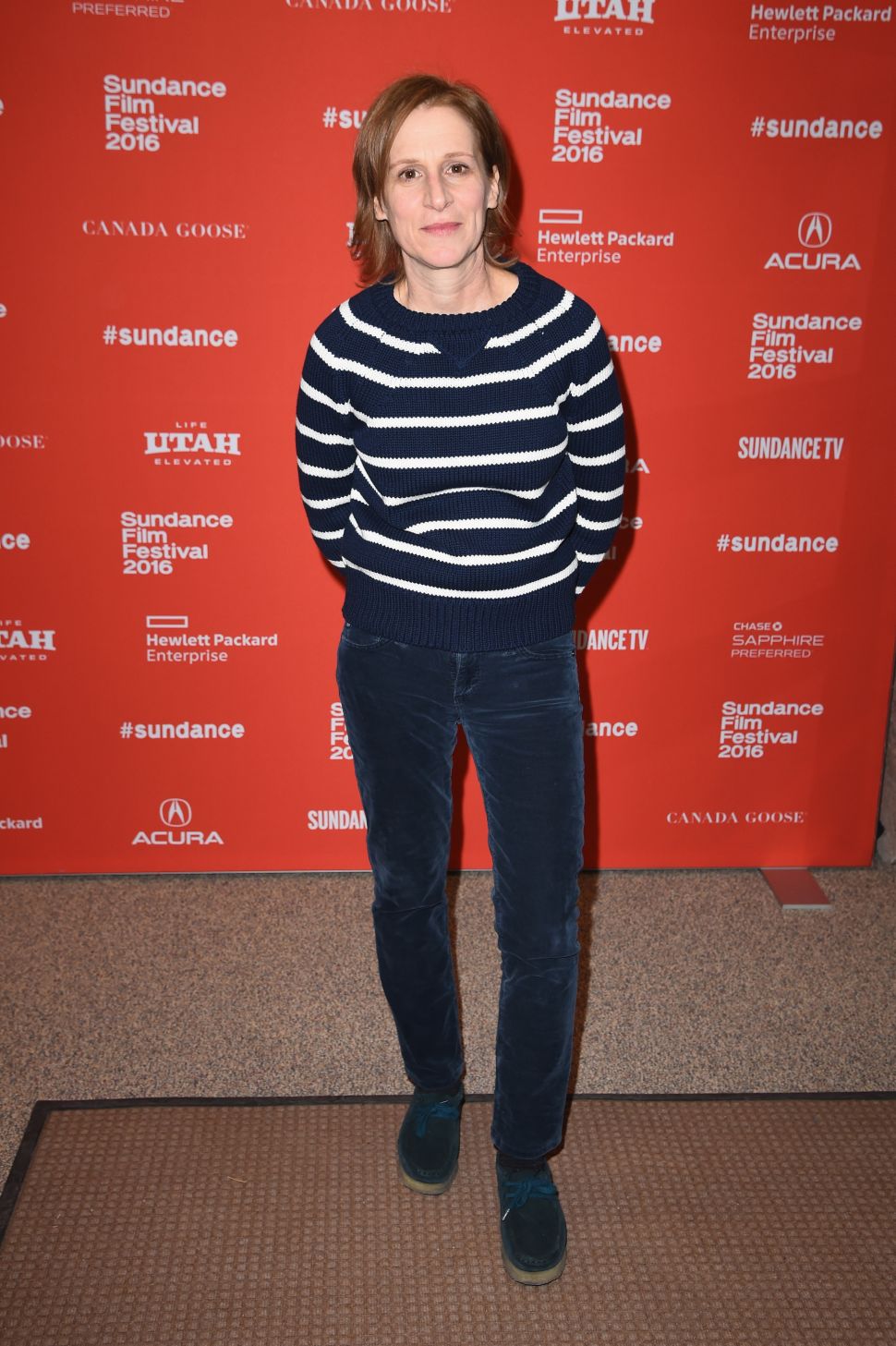