“Yeah, I diddle about with everything really,” David Bowie tells me with a laugh.

“The diddling comes out really well,” I reply.

“It’s very creative diddling. I know which diddle to twaddle,” he adds.

This lighthearted exchange shortly after Bowie’s 50th birthday in 1997 is captured in a collection of Bowie interviews, Bowie on Bowie (Chicago Review Press, 2015), and is perhaps the most self-deprecating account of an artist’s creative process, especially coming from one of the most wildly creative conceptual artists ever.

Once again, we are able to examine Bowie’s diddling as Parlophone Records massive re-release/retrospective box set, Who Can I Be Now? (1974-1976), was just released last week.

This is the second such rollout of Bowie’s early work and follows Five Years (1969-1973) with another trove of rare mixes, remixes, and remastered tracks. The vinyl and CD sets include Diamond Dogs, David Live (in original and 2005 mixes), Young Americans, Station To Station (in original and 2010 mixes), Live Nassau Coliseum ’76, and a specially curated compilation, Re: Call 2, containing singles and non-album B-sides.

Among all this is a previously unreleased album recorded in 1974 called The Gouster. Producer Tony Visconti, who variously worked with Bowie over four decades, including on Blackstar, which was released shortly before Bowie’s death in January, oversaw The Gouster’s mastering from the original tapes.

How does a Bowie album not get released?

Perhaps he didn’t want it released? After all, the best of The Gouster’s seven songs ended up on Young Americans, including “Right,” “Can You Hear Me,” “Somebody Up There Likes Me,” and “Young Americans.” Perhaps it always remained a demo to Bowie, a stepping stone, but it gives further entree into his diddling, because after recording The Gouster at Sigma Sound in Philadelphia in 1974, Bowie headed to New York and continued recording, this time with John Lennon sitting in, adding backing vocals, on what became Young Americans.

Bowie called Young Americans his “plastic soul” album: He was reproducing other people’s ideas—black American ideas—rather than pioneering. This box set looks at the so-called “American” phase of Bowie’s career and is named for a song on The Gouster—he was clearly exploring.

Bowie has said the apocalyptic helter skelter rock and roll of Diamond Dogs represented his inner turmoil: “This ain’t rock and roll, it’s genocide,” Bowie exclaims in the title track. Oh my god, the grating guitar riffs that lead into “Rebel Rebel,” a love song to glam rock teendom and being righteously out of control. This is really the final Ziggy-era album: there’s Ziggy on the cover morphing into a new animal; or dying.

Young Americans is Bowie turning his back on Ziggy’s dystopian craziness, but he’s still looking at rebellious teen years.

A “gouster” was a term used for African-American teens in the ’60s in Chicago who wore baggy suits, similar to the zoot suit. Teenage Davy Jones (Bowie’s real name) was a Mod—Mods were obsessed with Motown and soul. By the mid 1970s England’s Northern Soul movement mutated from the Philly soul sound. Bowie as Mod soul boy is a character that popped up again in the 1980s with “Let’s Dance.”

Whether he liked it or not, Young Americans rushed Bowie into the disco era, and into the American mainstream. In the same 1997 interview Bowie says, “I can’t really remember a time when I had any interest in the mainstream, except when I was really young. When I hit my late teens, I just started to like more obscure, or so-called avant-garde stuff.”

With touring finished for Young Americans and the subsequent hit David Live album placating the money men, Bowie hopped on the first train out of soul city: Station to Station was recorded at Cherokee Studios in L.A. with Young Americans producer Harry Maslin, and Bowie’s time there was accompanied by all the riotous goings-on afforded by the 1970s.

The recent filming for Nic Roeg’s brilliant The Man Who Fell To Earth had proven traumatic for Bowie, and may have influenced the record. Along with disco (“Golden Years” is a neat slice of Philly soul), balladry (“Word on a Wing” and “Stay” are gorgeous love songs), and one cover (“Wild is the Wind,” another smoocher, previously recorded by Johnny Mathis and then Nina Simone), there is the quirky, TV anthem “TVC 15.” Bowie’s Man Who Fell To Earth character became obsessed with watching television(s).

That’s Bowie: a seamless marriage of “musics,” a plural Bowie himself used.

“There are some things that I do quite well,” said Bowie in 1997 about his songs. “Maybe because it’s my lack of expertise, but they have a kind of brutal integrity to them that worked. I know nobody else could do them quite the same way.”

Within Station to Station’s title track’s strutting march and after an impossibly long introduction, Bowie croons, “The return of the Thin White Duke throwing darts in lovers’ eyes.”

What a voluptuously romantic opening line. Bowie had found his new persona, the one to shake off Ziggy and this mainstream soul boy (for now). Bowie had discovered The Thin White Duke, but already he was leaving him in the dust as well.

Is there anything more quintessentially David Bowie than that? He was on the train outta L.A. and heading to Berlin fast, and even when he was looking in the rearview mirror, he always kept one eye fixed on the road ahead of him. 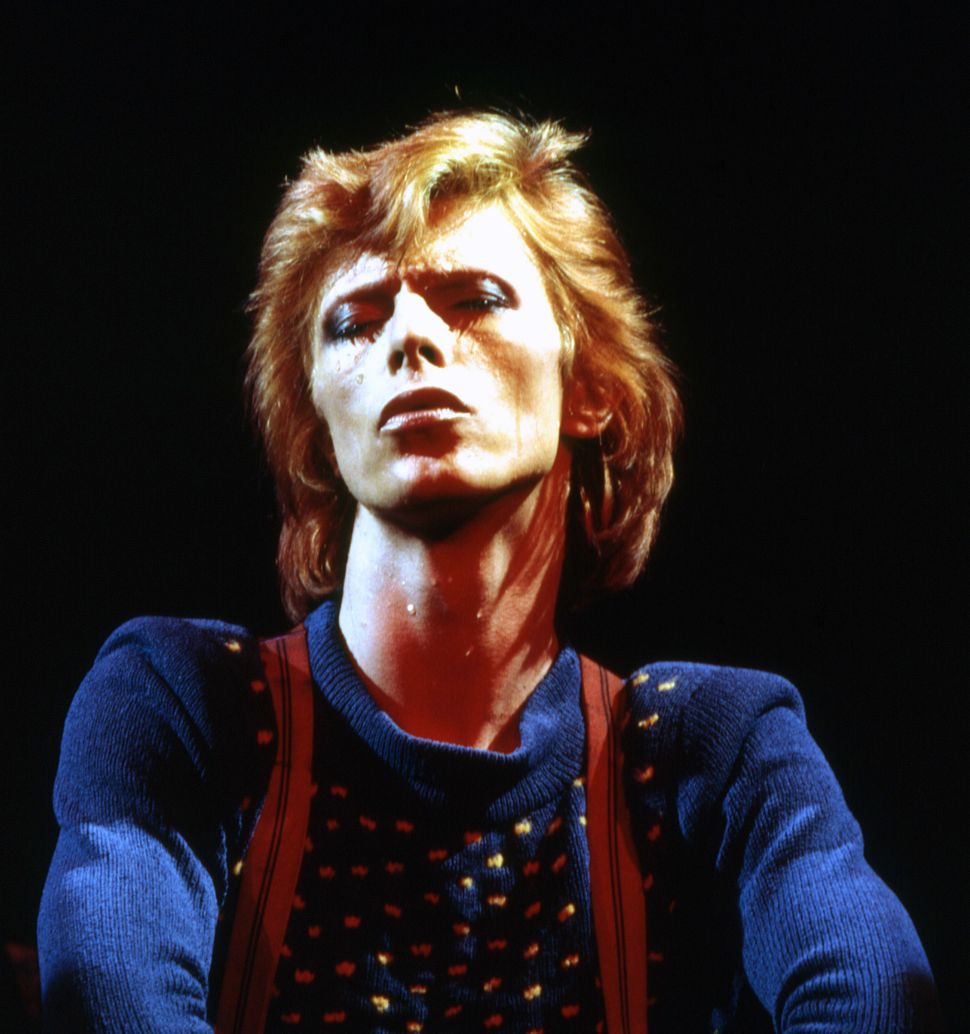