Benjamin Bergen studies profanity. He also has a two-year-old son. You might think that would make it difficult for him to bring his work home with him, but he said that actually the opposite is true.

He would know—Bergen, a professor of cognitive science and director of the Language and Cognition Laboratory at the University of California, San Diego, will soon publish What the F: What Swearing Reveals About Our Language, Our Brains and Ourselves.

Bergen’s main research interest is studying how people use language to express emotion, and “nowhere is language more effective at doing that than in profanity,” he said.

Once Bergen had surveyed the available data on profanity, he found that “taboo vocabulary” is drawn from four distinct areas: religion, sex, bodily functions and slurs for marginalized groups. He calls this phenomenon the “Holy Fucking Shit Nigger Principle.”

Profanity actually has a neurological basis—while the brain’s language center is in the left hemisphere of the cerebral cortex, swearing is actually controlled by the limbic system, the part of the brain involved with processing emotions.

This difference is most pronounced in patients with brain damage—even if their language center is impaired, they can still curse because swearing is as much an emotional phenomenon as a linguistic one.

“It’s hard to imagine what harm is likely to come from telling an adolescent his report card is ‘fucking fantastic.’ Compare that with telling him ‘You’re stupid, and I hate you.’- Dr. Benjamin Bergen

The emotional aspect of swearing has also led to a belief that it is harmful for developing minds. Indeed, a 2011 study in the journal Pediatrics concluded that children were more likely to act aggressively when exposed to profanity—they were also more likely to swear themselves.

Bergen debunks this study and others like it in his book, however, pointing out that some researchers have found swearing is actually a “harmless emotional release” for people of all ages when used in moderation.

“It’s hard to imagine what harm is likely to come from telling an adolescent his report card is ‘fucking fantastic,’” Bergen writes. “Compare that with telling him ‘You’re stupid, and I hate you.’ You can use profanity positively, and you can use ‘clean’ language abusively.”

Profanity also increases pain tolerance: in a 2009 study, scientists at Keele University found that subjects who submerged their hands in ice cold felt less pain and were able to keep their hands in the longer when they swore than when they used “clean” language.

Because science isn’t on their side, parents are forced to find other rationales for discouraging profanity.

“If we believe these words are bad, it’s easy to believe they’re bad for some reason—they cause harm, they lead children to become more aggressive, they blunt emotional responses,” Bergen said. “It’s a natural human process to justify, but that doesn’t mean the science squares with that.”

Once these children become adults, however, they may find that the standards on swearing are more relaxed—while many work environments discourage strong language, there are some fields where profanity is a fact of life. According to Bergen, stockbrokers are among the most profane professionals, which is no surprise to anyone who saw The Wolf of Wall Street:

Pop culture is also, however, the source of many misconceptions about cursing. For example, while only 10-15 percent of Tourette’s patients exhibit coprolalia (involuntary swearing) as part of the syndrome, it attracts more attention than any other symptom, largely thanks to TV shows like South Park, which latch onto these tics and make them out to be major problems:

Bergen said, however, that most Tourette’s symptoms are much more subtle—in fact, one of his neighbors had Tourette’s syndrome and he initially didn’t even realize it, because the boy’s disorder only manifested itself in grunts and throat clearing.

“I’m a cognitive scientist, and it never registered,” Bergen said. “But as soon as you hear someone utter a taboo word at an inappropriate time, you’re drawn to that. We don’t have rules about clearing your throat in public, but we have rules for yelling out swears in public.”

Several trade groups make it their business to police these social mores—in his book, Bergen spotlights the Motion Picture Association of America (MPAA) in particular. This governing body rates feature films so that parents can make informed decisions about what their children watch, but it has often been criticized for treating strong language more harshly than sex or violence. Bergen said the reasons for this were both moral and monetary.

“They protect children from the words they’re told children need to be protected from, but they also want to make the studios that fund them happy,” he said. “They’re projecting society’s values, but it’s pretty arbitrary.”

Despite these societal pressures, Bergen reiterated that “the casual use of four letter words to increase frustration, anger, joy and exual arousal has no demonstrated downside and a number of upsides.”

“Profanity isn’t the first thing I would turn to to increase my vocabulary, but it might be the second,” he said. 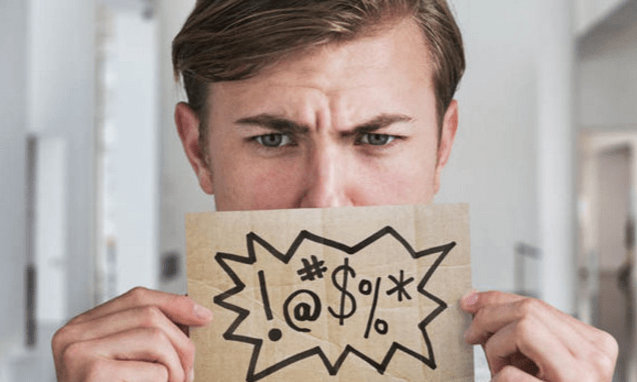