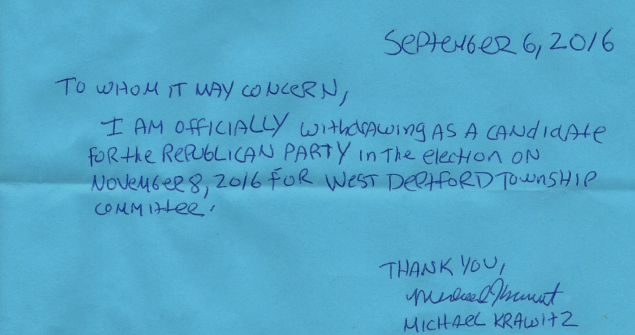 The resignation letter of Mike Krawitz, who withdrew from his township committee race this week after telling a journalist on Twitter that he hoped she would be raped. West Deptford Republican Party Committee

Three bills that could pave the way for student loan forgiveness or deferment in the event of death or disability made it through their first Assembly committee hearing this week. New Jersey currently has some of the smost aggressive repayment laws in the country, with some parental cosigners forced to continue paying their deceased child’s balance.

The mayor of Jersey City and the former U.S. Ambassador to Germany were at loggerheads this week, with Murphy filing a complaint against Fulop to the state Election Law Enforcement Commission. Murphy, who will likely run against Fulop for the North and Central Jersey vote in a crowded Democratic gubernatorial primary, is accusing him of using his mayoral campaign as a war chest for that race.

The West Deptford committee hopeful withdrew from the race this week after sending a female journalist at the Daily Beast abusive Twitter messages in which he wrote “I. Hope. Somebody. Rapes. You. Today.” Krawitz, who claimed to have been hacked and has run for the office several times before, previously made the news back in 2008 when he impersonated then-State Senator Donald Norcross to get through to Governor Jon Corzine.

DiBella, a member of the Brookdale Community College Board of Trustees, also suffered because of ill-advised Twitter behavior this week. Screenshots of “likes” from DiBella’s account for several obscene tweets surfaced Friday, one of which used the n-word and another of which referred to President Barack Obama as a “monkey.” DiBella also claims to have been hacked.

The Somerset County Democrats’ freeholder candidate dropped out of the race this week citing a desire to “refocus on her growing psychology practice and her teaching responsibilities.” Opposition research from Republican operatives had been hanging over her candidacy in the county, where Democrats see a rare opening to gain seats in a presidential year when Donald Trump’s candidacy may keep some centrist Republicans away from the polls.

The bumps in the road keep coming as Atlantic City tries to rebuild one of its many closed casino properties. Developer Glen Straub, owner of the shuttered $2 billion Revel casino, threatened to take his business elsewhere Thursday at a meeting with CRDA’s land use division. He had been asked to provide a landscaping plan for the Revel property in addition to a traffic flow plan. 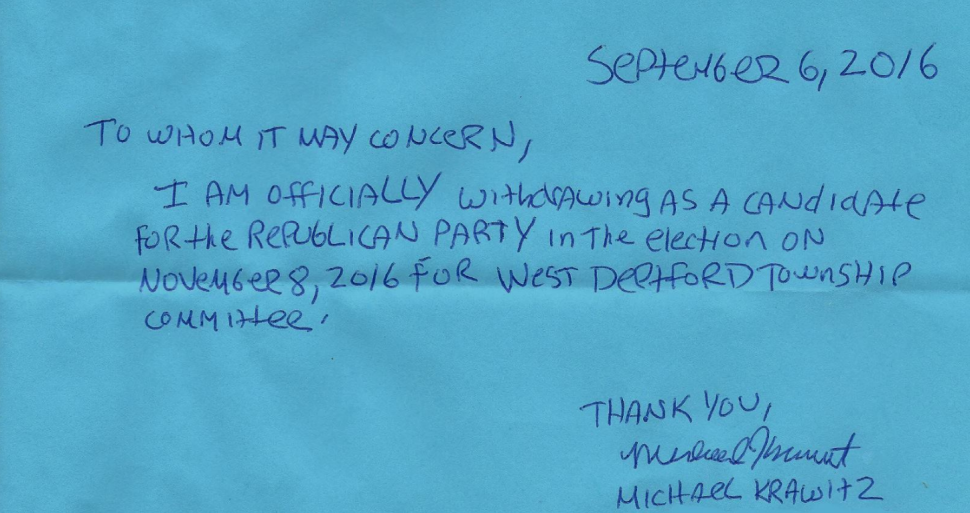