She holds public and private positions, which differ, diametrically.

Hillary versus The Donald. More she said, he said?

Not quite. Real life isn’t a sensational media circus of verbal accusations.

Actions matter. Deeds, not words, is the proverb.

Actions do speak louder than words. Hence the 2016 election’s stark tabloid simplicity: Her crimes, his words.

Beyond the tabloid simplicity lies accountability—for both crimes and for words.

Pussy was a talented criminal. Auric Goldfinger recruited her to help him steal a billion dollars in gold bullion from Fort Knox. Yes, Auric and Pussy were going after The Bank.

Trump’s ugly sex talk was recorded in 2005, without his knowledge.  Did we hear his sincere private opinion about private parts? Perhaps not. However, he has publicly apologized for his foul mouth and holds himself personally accountable.

Despite the apology, The Donald faces a relentless media tsunami of unproven allegations—allegations of pinching and groping and unwanted squeezes and lecherous looks.

Media tsunamis are a type of public accountability. However, we live an in era where the self-proclaimed media of record try their best to ignore wrongdoing by powerful liberals or, that tactic failing, attempt to justify them. As a result, liberals enjoy a comparatively unrestrained presumption of Media Privilege. American media tsunamis are thus a highly selective form of public accountability. They overwhelmingly slam Republicans and they slam with calculated political malice and mud.

Hillary’s public face, the one she presents American voters, is a lie.

A media outrage tsunami struck poor Mitt Romney—because the Romney family dog rode in a carrier on the roof of the family car. Why, Clintonite Lanny Davis declared this canine travesty proved Romney unfit to serve as president.

Unfit, Lanny? Romney was the man who called Vladimir Putin’s Russia America’s “number one geo-political foe” and Barack Obama mocked him for it. As the linked article notes, in 2012 Obama told Russia’s then-president Dmitry Medvedev to tell ole Vlad that after the 2012 U.S. presidential campaign he (Obama) would have more flexibility in addressing the Kremlin’s concerns. Who was right about the Kremlin, Lanny? Mitt or Barack?

Whether or not they support Trump, many conservatives are fed up with the crooked media’s selective orgasms of privileged outrage. As a result, a media tsunami’s power to inflict permanent damage has waned.

The shock of Trump’s 2005 hot mic is already receding. Did Trump use vile language and make crude, arrogant declarations? Yes. But compare Trump’s verbal vulgaritywith the physical, flesh and blood horror of Bill Clinton’s sexual depredations. Substantiated charges of rape and physical mistreatment of women tag Bill. Trump’s verbal vulgarity is a decade-old. Bill has repeated his abhorrent, criminal behavior for decades. Since Bill’s repetitive, damaging behavior has been enabled, his enablers also deserve scorn and condemnation. His chief enablers? The media of record that avoid investigating the charges—and his wife, Hillary.

Bill Clinton is a one-man War On Women. On the other hand, Trump said bad words.

Actions matter. Hillary Clinton is waging a one-woman War On Honesty, and getting paid for it by Wall Street financiers.

In a speech delivered off-the-record, Hillary told the The National Multi-Housing Council that she lies with calculation. Oh, she wasn’t that direct—she can’t be that honest—but read the Wikileaks transcription. Wikileaks is quoting a hacked campaign staff email. (The recipients included Hillary’s campaign communications director Jennifer Palmieri and her campaign chairman, John Podesta. More on Podesta in a moment.)

“But If Everybody’s Watching, You Know, All Of The Back Room Discussions And The Deals, You Know, Then People Get A Little Nervous, To Say The Least. So, You Need Both A Public And A Private Position.” (April 24, 2013)

In a speech delivered for Deutsche Bank (October 7, 2014), she told Wall Street financiers she intends to rely on their expertise to fix the woes afflicting America’s financial sector. This is a complete 180 from what Hillary tells Bernie Sanders supporters. Hillary wants folks who Feel The Bern to believe she’s ready to jail Wall Street bankers.

Here’s some burn. October 2016 finds Deutsche Bank on the verge of collapse.

Wise guys call it pay to play. Is it felony bribery?  Not by the letter of the law.

But it’s a crooked game and it corrupts American politics. Hillary’s public face, the one she presents American voters, is a lie.

It was the opening salvo of Hillary’s bid to do two things: (1) blame Vladimir Putin and Russia for her criminal mishandling of classified information and (2) tie The Donald to the Kremlin. Robby went Tail Gunner Joe while chatting with ABC’s This Week host and former Bill Clinton administration aide-de-media George Stephanopoulos. Media Privilege? Media connivance.

A dog on the roof just destroyed Mitt Romney as a credible president? Hillary used her off-the-books and non-secure server system to transmit and analyze classified national security information. Even disgraced FBI Director Jim Comey managed to call her handling of classified information “grossly negligent.” When handling classified information, gross negligence is criminal. Hillary has committed a criminal act. Comey sold out the rule of law.

Laws governing the handling of classified information exist for good reason—lives are at stake.

But Media Privilege. Hillary and her apologists continue to peddle the “Putin did it” line and by innuendo accuse Trump of treason.

But note: Team Clinton has not denied the quotes Wikileaks says came from her well-paid speeches.

Per the AP report, John Podesta is serving as the go-to guy for blaming Russia. “I’m not happy about being hacked by the Russians in their quest to throw the election to Donald Trump,” Podesta wrote (in Twitter tweets). “Don’t have time to figure out which docs are real and which are faked.”

Yes, what she said may have been altered! On behalf of Trump!

Could be some of the hacks were altered. We don’t know. We do know Podesta hasn’t denied the accuracy of the quotes. This indicates he’s engaged in rank evasion. Donald Trump accepted personal responsibility for his foul language.  Hillary, Podesta and the rest of Team Clinton are not about to accept responsibility for being caught in a bald lie. Hillary has yet to admit she lied about Benghazi.

And lie she did.

President Donald Trump will be held accountable. A hostile national media will confront him and blast him, 24/7. Senior Republican leaders will rigorously oppose Trump policies and proposed legislation they deem wrong-headed. Trump, however, has the communication skills to be a successful president. To be successful he will have to work with Congress—pursue the art of the deal on The Hill. Barack Obama never bothered to do that. The results of Obama’s malfeasance and ineptitude include ObamaCare, a weak to non-existent economic recovery, eroding U.S. military capabilities, a foreign policy in shambles and a disdain for the rule of law. Laws are for little people. By failing to prosecute Hillary for criminally mishandling classified information, Attorney General Loretta Lynch and FBI Director Jim Comey sold out American national security law.

Her crimes, his words. Trump has made a campaign promise. At the moment the promise is just words. Here’s The Donald’s promise: if elected president he’ll jail Hillary Clinton.

And Hillary knows it’s the truth. 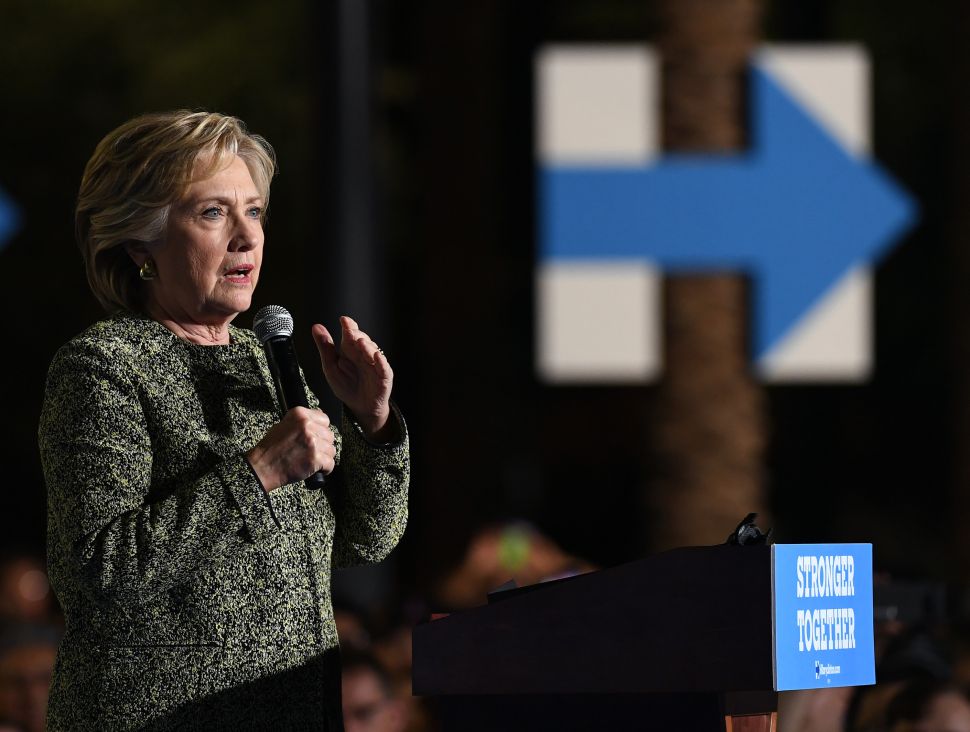