While New Jersey will not elect a new governor until November 2017, several candidates, some who have already withdrawn from the race, have Federal super PAC support. State PACs report to ELEC but federal super PACs do not.

While the upper limit placed on the potential Gubernatorial candidates who chose to take public matching funds has just been raised, the total number is still well below the $20 million threshold of what candidates running for statewide office in New Jersey will need to spend to be competitive. Campaigns therefore must rely on PACs to make expenditures independent from them.

Blame the high cost of media in the New York and Philadelphia markets, the endless increase in postage and mailing, or the political consultants and lawyers needed to assure campaign compliance, but less than $20 million for a statewide campaign won’t do the job.    PAC support and labor union support is essential for a candidate to succeed.  “Independent” expenditures from super PACs are key.

Former Gov. Joe Corzine spent $27 million of his own money in the 2009 gubernatorial race against Gov. Chris Christie. No campaign for statewide office in NJ since that election has been successful without spending more than $20 million.

New Jersey PACs and federal super PACs all have some ties to past Democratic and Republican candidates. Phil Murphy, a former U.S. Ambassador to Germany and current front runner in the Democratic primary, is the only candidate to officially declare his candidacy and the only candidate for Governor with federal super PAC support who remains in the 2017 primary. The other candidates and ex-candidates who would have received federal super PAC support includes Senate President Stephen Sweeney, Jersey City Mayor Steve Fulop, Sen. Raymond Lesniak, and Lt. Gov. Kim Guadagno.

For NJ Gubernatorial candidates who raise and spend funds from their NJ campaigns, state law requires candidates to file a form with ELEC designating a treasurer and create a campaign depository within 10 days of receiving a contribution or making an expenditure related to an official gubernatorial campaign.

Individual donors who contribute to a gubernatorial campaign instead of seeking out one of the federal superpacs will have to comply with state law as well as the restrictions that apply against doing business with the state and any government entity in New Jersey after the election.

Donors to state campaigns will be able to contribute a maximum of $4,300 per election to 2017 gubernatorial candidates after ELEC adjusted the limits for inflation, as is required every four years. The primary and general election campaigns are considered separate elections, so a donor who contributes to the same candidate in both elections can now give $8,600 total to the state campaign accounts of NJ Gubernatorial candidates.

In June, ELEC also increased the amount candidates can receive through the state’s public financing system. Under the new thresholds, gubernatorial candidates who qualify for public funding can spend a maximum of $6.4 million in primary elections, and $13.8 million in general elections. Under the Gubernatorial Public Financing Program, candidates are also eligible to receive up to $4 million in public funds during the primary election, and $9.3 million during the general election.

With low limits like this, look for next year’s campaign action to come primarily from state and federal PACs using their money as “independent” expenditures. 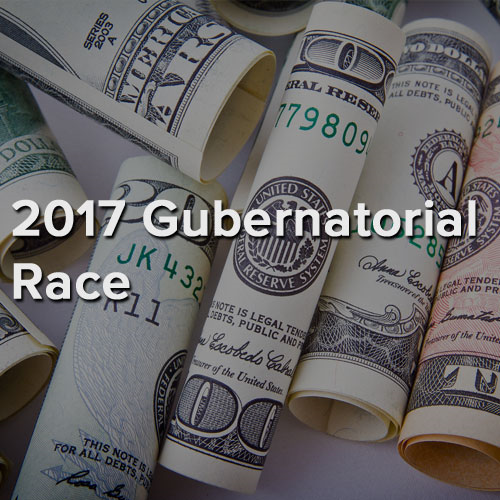