A moment arrives at the conclusion of the documentary Restless Creature: Wendy Whelan when the New York City Ballet principle dancer, then 47, performs her last plie on the Lincoln Center stage. Between two exquisite male dancers, Whelan’s slender, muscular body is pliant, fluid, driven by a spirit that channels the music and its emotion and transmits that to the audience. Her art is so great that we only see the beauty, not the effort – her backstage struggle with the limits of the human body as she approached fifty.

By that farewell performance depicted in co-directors Linda Safire & Adam Schlesinger’s glistening feature documentary that will play at this year’s 54th New York Film Festival (Sunday, Oct 9 at 3:30pm; Monday, Oct 10 at 6:15pm), the audience knows that for Whelan, following surgery and recovery, this is both a peak in her career and a cliff in her emotional life.

Since age three, the expressive Tennessean has been a ballerina. Whelan has danced at the front of the corps du ballet until well past the time great gridiron athletes and basketball superstars have hung up their jock straps. The documentary opens a window on a major female artist looking back from the peak of her ballet career – not as a diva, but as someone who infused caring and camaraderie for thirty years as a role model for generations of dancers under the stern handsomeness of Danish Ballet Master in Chief Peter Martins, who appears nowhere near retirement.

Whelan’s emotions often vibrate close to the surface in this traditional documentary that captures a fascinating and famous artist at a critical point. Restless Creature: Wendy Whelan complements the great Errol Morris’s The B-Side: Elsa Dorfman’s Portrait Photography Sunday (Oct 9 at 6pm; Monday, Oct 10 at 9:15pm).  In his amiable documentary, a low-key Morris tosses an occasional trenchant question from off camera to his subject, the low-key Massachusetts photographer Elsa Dorfman, 79. It’s a portrait of a portrait artist.

The menschy, maternal, impish Dorfman, like many of her generation, began her career as a secretary. She admits to Morris that she lacked marriage prospects. At that time, 1959, it was a bit of a shonda for a nice Jewish girl from a relatively conservative family. She exchanged Massachusetts for New York, finding a secretarial job at Grove Press, then a hot bed of the Beats. There, while working the copying machine of the day, she met Allen Ginsberg and his contemporaries – and was introduced to the camera for the first time. By the time she left bohemian New York for Cambridge, Massachusetts – a little too square for that drug and bed-hopping scene – she had begun to take pictures (famously, of Ginsberg, Bob Dylan, Anne Sexton, Robert Creeley, Gregory Corso and Joni Mitchell), ultimately creating a large body of portraiture using the Polaroid 20X24 camera as her instrument of choice.

Early on, in order to become comfortable with taking pictures of others, Dorfman stripped and took pictures of her ordinary, hippy figure in the bathroom mirror, becoming comfortable with the camera’s gaze as she turned it on her subjects. Her photos reflect a sense that she is at home with the camera and welcomes her subjects to be at home in their skins as they really are, not as a projection of an ideal. We learn that Ginsberg, a lifelong friend, loved having his photo taken and in a stunning portrait, poses naked for a picture of himself before an earlier Dorfman image of himself clothed. The intimacy of deep friendship between the pair is palpable.

One difference between the women is their stance on motherhood. Whelan’s early decision to remain childless, making the sacrifice because her body itself is her instrument and that instrument was always her chief priority. Dorfman, in contrast, found her art, then married and bore a son who often figures in her work, growing up before the camera like a flower in time-lapse photography. When, one significant birthday, her husband gave her black balloons, the three of them trekked to her studio a few blocks away in their matching red nightwear for a family portrait. Family (her parents included) figure prominently in Dorfman’s generous work, alongside the many, many 20X24 Polaroid portraits she took of families that came to her studio over the years.

Opting in or out of motherhood did not define either women’s creativity. The urge to transform physically as Whelan did or through a separate medium like Dorfman burns strongly in both women. The documentaries, taken together, show two deeply committed artists who create a community of compassion and love in their work that was inextricable from their daily lives. Take away the art and who are they – where does the woman end and the creator begin? 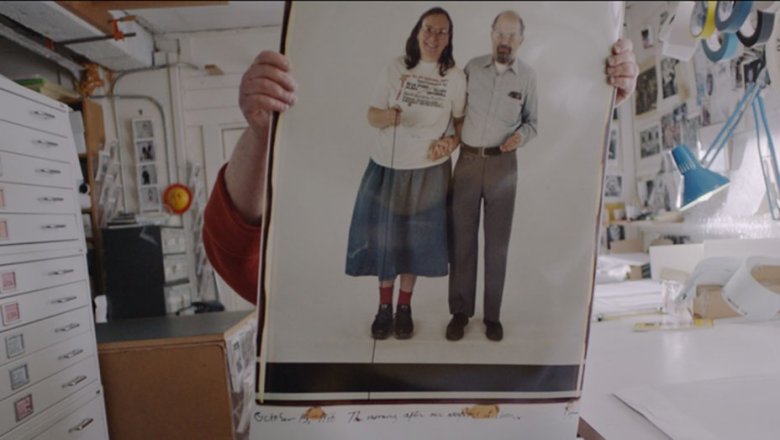