Even Adam Conover, host of Adam Ruins Everything, can’t ruin the election any further than it already has been. Maybe that’s why his election special is doing something a little different: trying to make it a little better.

Sure he’ll still be there with his signature suit and pompadour, laying down facts and reminding you that sometimes, things are actually much worse than the fantasy of which we’ve convinced ourselves but his message, when it comes to the election, is one of bipartisanship. With a goal of appealing to all people regardless of political affiliation Conover’s election special might turn out to be the helpful reminder that even after November 8, we’re all going to be stuck together in one country, so we better do the best we can to get along.

OBSERVER: How do you land on which topics to tackle in your show?

CONOVER: We start from both ends. There are occasionally topics where we start from thinking, “What do we want to say about this topic?” But more often we start looking for interesting stories that genuinely surprise us. The show got started because I have read this kind of material my entire life, and I love that feeling of, “Holy shit! I didn’t know that! That’s the opposite of what I thought was true—how is that possible?” When we were going through the special, we were pitching out ideas for different acts and angles. Like the story of Edith Wilson: the president’s wife basically ran the country for a year and a half and that’s not something that’s common knowledge. Something like that is a tent pole for the show because it’s so genuinely surprising and crazy.

Over the course of the show, which discovery has been most surprising for you?

The example I always use, in our sex episode, we did a story about the female hymen, and I didn’t know until I was literally pitched the story by a writer in our room that I had been wrong about it my entire life, that I had misunderstood a basic part of human anatomy. And most people did! If you ask most people what the hymen is, they’re wrong—which is very, very bizarre. The most misunderstood part of the body. Literally, the body part was not where I thought it was. It’s like if I always thought women’s nipples were on their belly buttons or something.

When it comes to this election, there seem to be a lot of conspiracy theories, and a lot of high emotion. How did you stay detached?

Really, the dominant theme of the election for me has become conspiracy theories. I don’t think we’ve ever seen conspiracy theories have such a central place in American democracy, or seen conspiracy theorists so empowered, or the experts of the world so incapable of shutting them down. But that only hit me with full force recently after we taped the show and so we’re going to have to address that in a future episode. I think that zeitgeist will still be around. Conspiracy theories are also really hard to disabuse people of, because they tend to be based in an emotional reality rather than any sort of factual idea.

I wanted to a show that anyone in the country of any political persuasion could watch, and learn something from, and laugh. That was my goal and I’m proud to say we did a pretty good job of it. We toured the show all across the country, around fifty cities, everywhere from Seattle to Dallas to Detroit, so all sorts of different folks saw the show and we got a great reaction everywhere we went. I don’t see myself as being on one side and trying to pull people over to my side, you know? I see myself as trying to do comedy that will appeal to and enlighten everyone who will see it. So we started from a position of trying to identify emotions and concerns that everyone shares about the election. So our theses at the top of every segment are things like, “Isn’t this the craziest election of all time? Aren’t we upset by all of the name-calling,” or “Money in politics is a big problem, and here’s what you don’t know about that.” Money in politics is a truly bipartisan concern. Everyone is upset by it taking too much control.

And finally we wanted to address division in American society, because it’s an ugly one, and that perceived division between Team Red and Team Blue is really the thing that is novel ands newest about American democracy right now: how polarized we are on a partisan level. And it’s always been apparent to me that it’s a false division—that people aren’t really on Team Red or Team Blue, but are much more heterogeneous than that. And if we’re willing to treat each other as complicated human beings, we’d be able to get a lot more done and be a lot more respectful of each other in the process.

What do you think is the biggest misconception about this election?

I think we put most of it in the show: that this election is completely ahistorical. Obviously, it is unique compared to other elections—even more so in the past few weeks since we taped the schedule I should add. We taped the special before Trump said he might not accept the results which is a pretty big deal. But I will say, we compare Trump to George Wallace. And after Trump said “the election might be rigged against me,” my researcher sent me a quote of George Wallace saying the same thing. It didn’t make it into the show because it was after the taping, but you can find a lot of these things.

Obviously they’re all in a new combination when it comes to Trump, but we’ve had a period of relative democratic stability for the past 50 years—basically since 1958, things have been a lot more sedate and a lot more stable, and a lot less heated. So certainly compared to the elections of the 80’s and 90’s this one is really crazy, but when you compare it to elections of the past, it begins to look a little bit more of a piece. And these are elections that America got through—where everything was heated and really ugly, but the republic went on.

I’m not going to say it’s a foregone conclusion that America will always survive—we’ve been very lucky thus far—but our main point is that we have such a short historical memory in this country and a lack of historical perspective, and our goal was to bring one to the audience.

What is something you wish every person could understand before the election?

I think it’s that point about Team Red and Team Blue not being real things. I think we have a new unwillingness to talk to people who disagree with us, or even listen to people who disagree with us, where we see an opposing view as a threat and an insult, and I think that’s very negative. The way that people speak about those of other political parties sort of verges on bigotry: Oh I could never be friends with a Republican, or something like that. The number of people who say they would be unhappy if their son or daughter married someone of the opposing political party has gone up in recent years—that to me is the definition of bigotry. I would like to encourage people to take the temperature down and to realize that a person who disagrees with you is just another person. 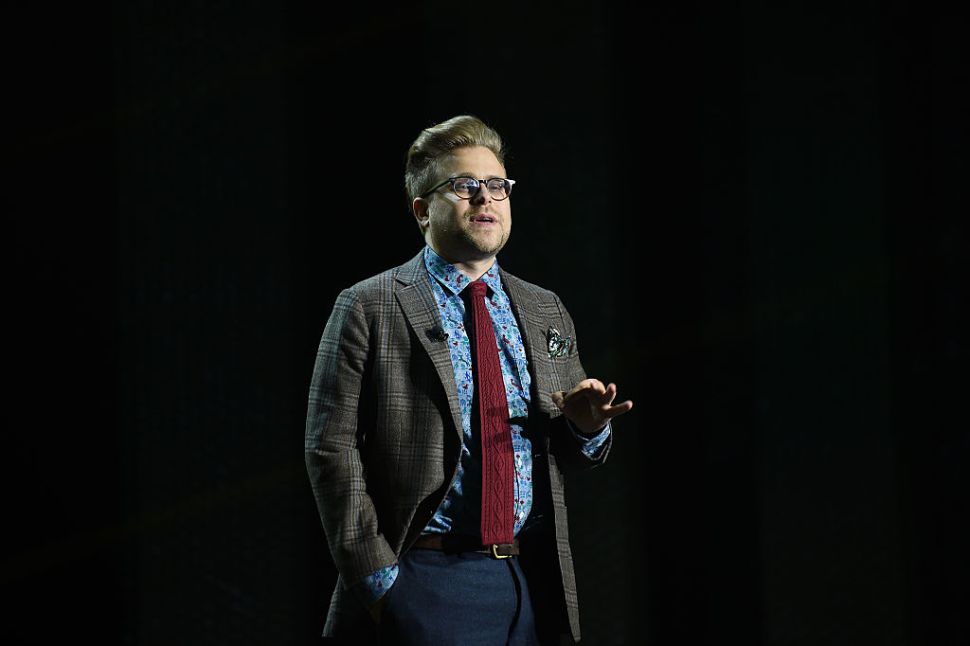