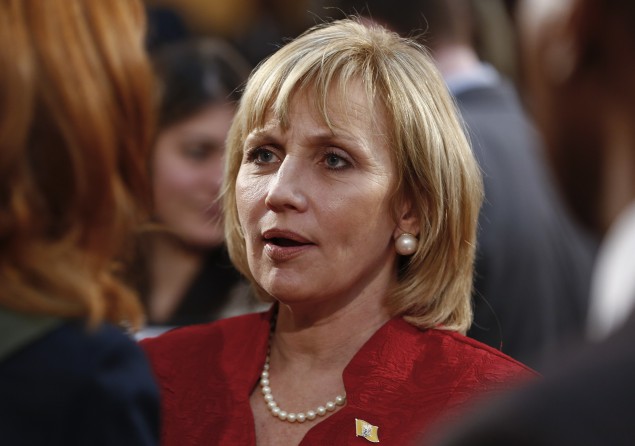 Lieutenant Governor Kim Guadagno cast aside her usual role as Governor Chris Christie’s dutiful understudy this week when she came out against a plan to fund transportation projects in New Jersey with a gas tax. That move to distance herself from Christie in the aftermath of his disastrous decision to attach himself to Donald Trump’s presidential campaign could be her one shot at running a competitive race to become his successor next year, but it comes after years of working with a muzzle.

Guadagno said on New Jersey 101.5 FM this week that she opposes this year’s ballot question to dedicate money from a recently passed gas tax hike to the Transportation Trust Fund, which pays for repairs and maintenance of roads and bridges. That question, she said, effectively enables the hike, which she opposes.

“A vote for question No. 2 is a vote for the gas tax. If you like the gas tax you’ll like No. 2,” Guadagno said. “What we’re really saying in this question is that you have my permission, you meaning the legislators, have my permission to borrow $12 billion and pay for it with that 23 cents, the diesel fuel tax and the ‘baby oil’ tax.”

Sponsor and Assembly Speaker Vince Prieto suggested that Guadagno may not have actually read the question itself, which does not mention borrowing. Christie spokesman Brian Murray, meanwhile, said that Guadagno’s comments seemed out of character.

“The governor finds it hard to believe that the lieutenant governor supports giving an unguarded pot of money to the Democrat-controlled legislature, rather than on needed infrastructure projects,” Murray said in a statement. “It must be a misunderstanding.”

Guadagno has spent much of her tenure as Lieutenant Governor touring on the municipal-level fundraising circuit that Christie left behind after his reelection bonanza in 2013. The choice to buck Christie on a controversial decision now—and not during the aftermath of Christie-centered fiascos like the cancellation of the North Bergen ARC tunnel, Bridgegate, his veto of statewide marriage equality, his hectoring of a public school teacher on the Seaside Heights boardwalk, his decision to remain out of state during Hurricane Hermine while his attention was still on his ill-fated presidential bid, the debate over North Jersey casinos, and the furor over the TTF up until now—seems odd.

Guadagno and Christie have reportedly never enjoyed an easy rapport. Former Christie aide Bridget Anne Kelly recently testified in the Bridgegate trial that she was routinely left out of the loop by others in the administration.

And bound to become more “stressful.” With Christie’s approval rating bottoming out at 21 percent, the only way up in a gubernatorial race that many are calling the Democrats’ to lose will be away from him.