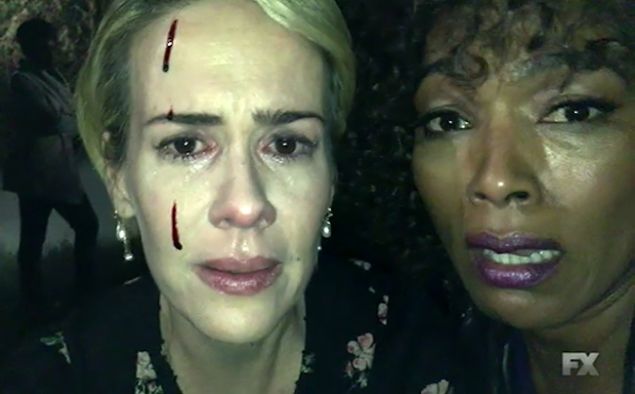 Is found footage the best thing that’s ever happened to American Horror Story? Since the twist at the beginning of last week, these two hours of TV have had one speed, and it suits AHS down to the ground.

We open with Sidney gleefully enjoying the Matt/Dominic showdown from last week, just as we did (layers on layers, man) before being quickly dispatched by Agnes, who has now gone Full Butcher. As far as “I’m not here to make friends” entrances go, it’s pretty bold.

Over at the Murder House 2.0, Rory’s gone and everyone’s falling to pieces already. It’s great TV, marred only by the fact it’s not TV anymore, since the director and showrunner is five miles away trying to stuff his intestines back into his body. The cast has been together for a matter of hours, and already their project is futile. It’s a fun, nasty little turn that also helps alleviate some of the confusion around the meta-levels of the show at this point. Between the shows-within-shows and celebrity doppelgangars, last week’s episode struggled under its own weight occasionally.

Another thing that helps confusing character beats? Writing good characters with clear personalities. No longer are the lines blurred between the Lees, the Shelbys, and the Matts. Sarah Paulson and Lily Rabe especially give it their all to pull apart Audrey and Shelby respectively. Even when grieving, Audrey is an elitist tryhard (and, yeah, the ridiculous accent helps.) Her bewildered, quiet turn as Shelby Miller nothing but a good performance.

It’s really Rabe who stands the HELL out this week, though, running the horror gauntlet in just about every way imaginable. Shockingly early into the episode, she’s attacked and hacked up by Agnes, surviving after a timely intervention from Dominic. Her fear has an air of inevitability about it; if anyone was prepared for what the house was going to throw at them, Shelby was, and she took the risk for Matt.

And for a minute, you really think it might work. The two share a moment while Shelby recovers, with Matt insisting their marriage was over the minute they entered the house for the first time. That the place “took something” from them. Shelby holds out hope, and you’re rooting for these crazy kids to make it all over again. Matt falls asleep next to Shelby, the two ready to face another day together.

Of all the Three Days In Hell contestants, Matt’s reasons for coming back to the house were never really clear. Yes, he was “promised” Dominic wouldn’t be coming, but there was still no logical motivation for him to return. Even a throwaway line about financial troubles last week would have gone some way in explaining why he makes the trip back to the house. But now we have our answer, and it’s a doozy.

Seemingly possessed, Matt wakes up in the dead of night and heads to the basement to meet up with WOOD NYMPH QUEEN (not Lady Gaga this time around, as far as I can tell). Shelby’s hot on his tail this time around, though, and beats the witch away, trying to snap Matt out of it once again. Matt’s not possessed, though, he’s IN LOVE with the witch. Shelby, who has just about had enough of this shit, waits not a second longer before she smashes Matt’s head in with a crowbar. Repeatedly.

So yeah, lots to unpack, and while Dominic comforts Shelby ineffectively, Lee, Monet, and Audrey are heading out to find Sidney and alert him to the dangers of Agnes, which, yeah, he already knows, ladies. Once again, the wandering through the woods is a little tiresome and drags for longer than it should, until the three are kidnapped by The Real Polks Of Roanoke™️. There’s no nuanced Frances Conroy performance to anchor this family, though. These guys are straight-up cannibal monster hillbillies, who waste no time in cooking up Lee’s leg (offscreen, so maybe not) and feeding it to Audrey and Monet. We were promised one survivor at the end of all this, and my money’s now definitely on Lee. Nothing says “I’ve seen some shit” like a missing leg.

The episode ends on yet another twisty, delightful note. Agnes, having been hiding out in the basement making WWE-style promos for her Butcher character, decides it’s about high time she burns down the house. The stands outside alone, in full Butcher regalia, giving yet another speech about cleansing fires or whatever. Behind her, more figures with torches approach, delighting Agnes. She’s fully gone, and the appearance of real ghosts doesn’t faze her one bit, until she comes face to face with the real Butcher, who it seems is not a Kathy Bates fan. A quick cleaver to the skull, and there’s a new Butcher in town. This one looks here to stay.

– RIPs to Sidney, Matt, and Agnes, who for my money were three of the more interesting characters the show had going for it. I understand the whodunnit of Mason’s death is really the only storyline we NEED wrapped up, so we gotta keep Lee and Monet around, but they’re still not quite… good.

– Lily Rabe sells the HELL out of Shelby’s shock after killing Matt. A really wonderful, proper performance to help anchor an episode that was swimming in Agnes and Polks.

– Apart from the Pig Man’s quick appearance last week, there’s very little pig stuff in the ACTUAL happenings so far. There’s no sign of any at the Polk farm, and the roaring Edward Mott creature roaming the tunnels below the house seems like something new. 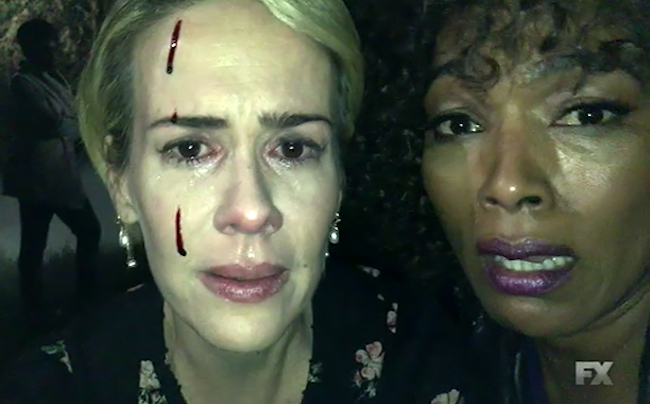