My son is the worst player on this team.

He seldom kicks or throws. Mostly, he skips. When the ball rolls his way, he falls on it, like a grenade, or picks it up and runs, which is frowned upon in soccer. Unless you’re the goalie. Which he isn’t. Because they don’t have those in his league. But that does not stop him from lurking in the box. Not in an effort to deflect scoring, but rather to hang from the goal post and entangle himself in the net. Last week, he started a game of tag during the second quarter. He swatted an opponent and yelled, “You’re it!” before running away down the sideline.

On the way to today’s game, we talked about hugging, and how we weren’t going to embrace our teammates so hard they fell over. “Purple Penguins don’t hug,” I reminded, but he has the memory of a goldfish. Moments ago, I watched him ninja kick a child who was trying to pass him the ball, and I wonder if we shouldn’t have stuck with the embrace. Afterwards, he ran to the bleachers, and offered onlookers high fives.

Since we only play four-on-four, everyone rotates out frequently. But even on the sideline my kid is trouble. He karate chops the bottles, kicks the practice balls into the woods, and sometimes leaves the field entirely to come lay on my blanket and ask for his post-game apple juice.

He is prone to lollygagging, even during play. When he gets tired or bored or wants to watch clouds, he lays down in the middle of the field.

He is prone to lollygagging, even during play. When he gets tired or bored or wants to watch clouds, he lays down in the middle of the field. The other kids dribble around him, or leap over, like cheetahs to his sleeping gazelle. But today, the warm-up seems to have made an impression. He’s been doing arm circles for most of the half.

I am embarrassed every time we come here. For the first few practices, I apologized to the other parents. “He’s small for his age,” I said. Or, “He’s never like this at home.” But an apology is only as good as the mitigation of the offending behavior, and it is obvious that my influence over my son’s sport decorum is limited at best.

In fact, the only card I really have to play is to pull him from the team. It is likely that the other children would have a better experience if my kid was not there. Every chain has its weak link, every ladder its bottom rung, and every litter has its runt. When it comes to this soccer team, my son is all of the above. Of course, I remember studying group behavior in a college psych class. Even when the “problem child” was removed, someone else just stepped in to take his place. I tell myself that if it was not my son somersaulting in midfield, it would simply be someone else’s.

The one thing we have going for us is that his coach is obviously short-listed for canonization. At the close of every game, he and my kid exchange fist pumps, and he says, “Great job today, buddy!” As though he really means it. As though he has utterly forgotten that my son spent the bulk of the first quarter punching him (playfully) in the ass.

And so week after week, we don shin guards and bright purple socks, and my kid, the runt, the problem, the slacker, happily reports for duty on field 5, much to the dismay of parents and caregivers alike. Because despite my boy’s lack of skills, this is his favorite sport. He wakes up every morning asking, “Is today a soccer day?” And let’s out a squeal when it is, it is, it is.

He is the worst player on the team. That is, where skills are concerned. But what separates us from the animals, I think, is that we let our young ones play together. Cheetahs and penguins, goldfish and gazelles all have their time in the sun. It is a game, after all. And they are just children. Ninja kicks and all. 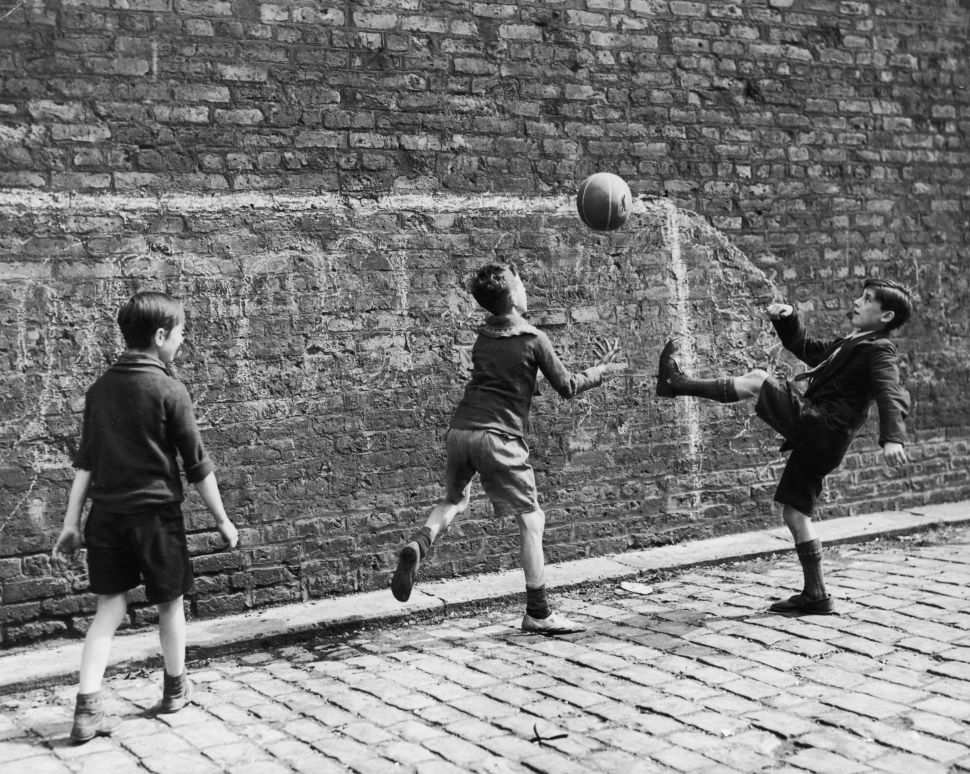