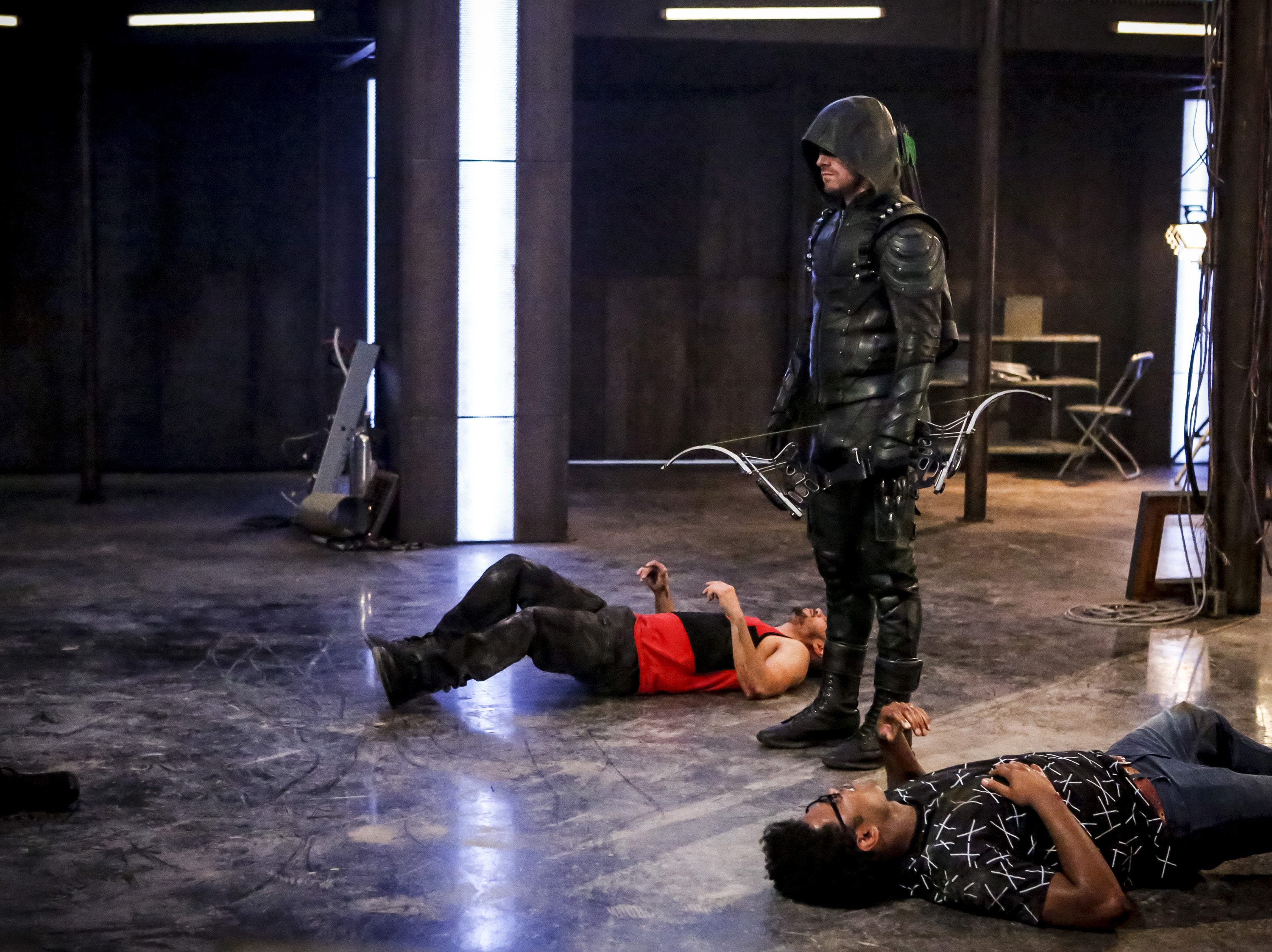 Getting ready to review an episode of Arrow is always an interesting process, because boy does it come with choices. Because you can’t just ignore the fact that the entirety of “The Recruits” revolves around Oliver Queen at his most diva-like trying to instill the shallowest of shallow lessons–the power of teamwork!–to a group of characters the plot requires to be dumb, until they suddenly aren’t. But, on the other, softer side of my CW-drenched brain, you also can’t just ignore the fact that holy of holies, some members of the Reign cast must have been sacrificed to the great DC gods in the sky because Arrow, at least through two episodes, seems like a fun show again. So, the choices: To be critical, or to admit Stephen Amell casually roundhouse kicking fools isn’t a much-needed weekly dose of visceral pleasure?

Well, as Olly said himself, “it’s all about the core.” And the core that’s kept this CW-verse vital is that sense of fun missing from other comic book media, so let’s focus on that first. Even if we end up falling on our asses.

Seriously though, Curtis falling off the salmon ladder should win an Emmy. I don’t care which one.

Part of what makes “The Recruits” so refreshing is that sense of newness–new characters, new teammates, new dynamics, new(ish) Oliver. It’s not exactly a secret that Arrow‘s fourth season turned into such stale bread even Neal McDonough couldn’t chew it. The addition of an entire new team–Curtis, Rene “Not Casey Jones” Ramirez and Evelyn Sharp–breathes such refreshing life into the Arrow-sphere that Oliver can’t even handle it. Which is perfect. Oliver–who is essentially Arrow personified, when it comes down to it–is so overwhelmed by any break from the show’s four seasons of status quo, he rejects it (Rejects it with his feet. In the face). Stephen Amell is usually never better than when he has to wrestle with Oliver’s two sides–savior-of-the-city to the left, kind-of-a-huge-dick on the right–so he’s unsurprisingly fantastic as Oliver grows more frustrated with the recruits: “You’re useless unless your behind a computer and you’re a little girl who should be doing something better with her life.”

But the great thing here–something that has elevated Arrow at its best over “a guy with a bow and arrow fighting crime”–is that as great at Amell is, Oliver is still clearly, obviously and unapologetically being an asshole. I mean, I get it. Ten minutes into the episode I actually wrote down “I will bet $1,000 that the goal is to work together,”  so watching Curtis, Evelyn and Rene rush Oliver one at at time like they’re extras in a Christopher Nolan Batman movie is frustrating. But that’s the difference, hammered home by episode’s end in Arrow‘s signature on-the-nose-style, between Oliver and “the Arrow.” Things like teamwork, like instructions, even simple instructions, become a lot harder to follow when they’re coming from a man in the mask who won’t stop hip tossing you over his shoulder, much less show you his face. 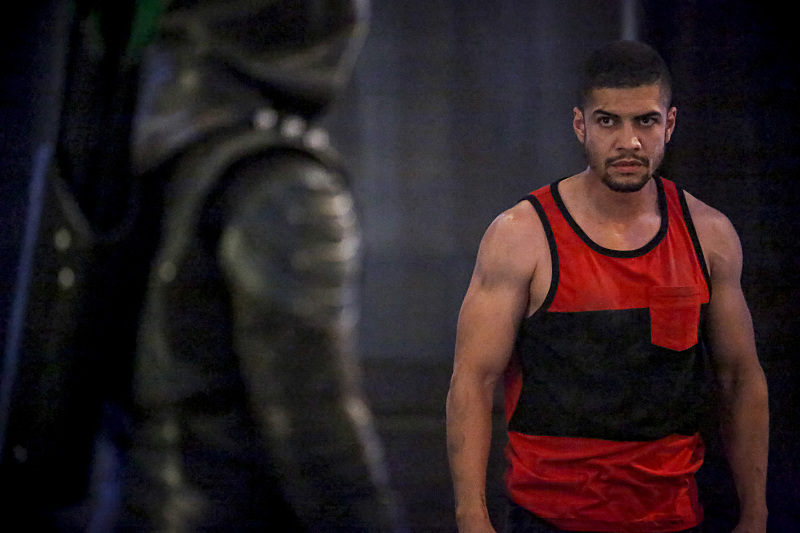 Even this episode’s villain-of-the-week, who I hope we’re not actually going to call Ragman this whole time, builds effectively on the weaknesses of season 4. One of the most glaring problems of last year was the small fact a town was nuked, as with with an actual nuclear bomb, and pretty quickly forgotten with a few tears and a couple of covered mouths. A nuclear blast is, believe it or not, a big deal. Ragman is that plot-point come back to haunt Arrow, the sole survivor of Havenrock, come to Star City to reap revenge on the company behind the missiles, AmerTek. The problem here being AmerTek is in dire financial straits–being connected to the nuclear holocaust and life as we know it is a budget killer, for all you business majors out there–and in bed with Tobias Church (still being played one gleeful laugh away from a moon-walk by Chad L. Coleman, bless him).

The climactic showdown at the weapon’s deal between Ragman, Green Arrow and Co. was, from a technical standpoint, beautiful done; Arrow still has some of the best stunt pieces on TV, and that flashing light fight sequence between Oliver and Church was no different. It was the logic, however, that was off. That Oliver would assume Ragman would abandon his mission, which was avenging the souls of thousands of people, just to save a person he never met was a bit of a leap, even for a dude who literally leaps over things for a living. It just feels abrupt, the introduction of Ragman as a murderer and his indoctrination into Team Arrow over the course of a single episode, especially when Arrow‘s over-long 23-episode seasons leave plenty of room for characterization.

I did laugh, though, when this radioactive, spooky-voiced bundle of terrifying rags and magic took off his mask to reveal Very Handsome Actor Joe Dinicol. Never change, CW. Stay tuned for Ragman absolutely destroying the salmon ladder next week. 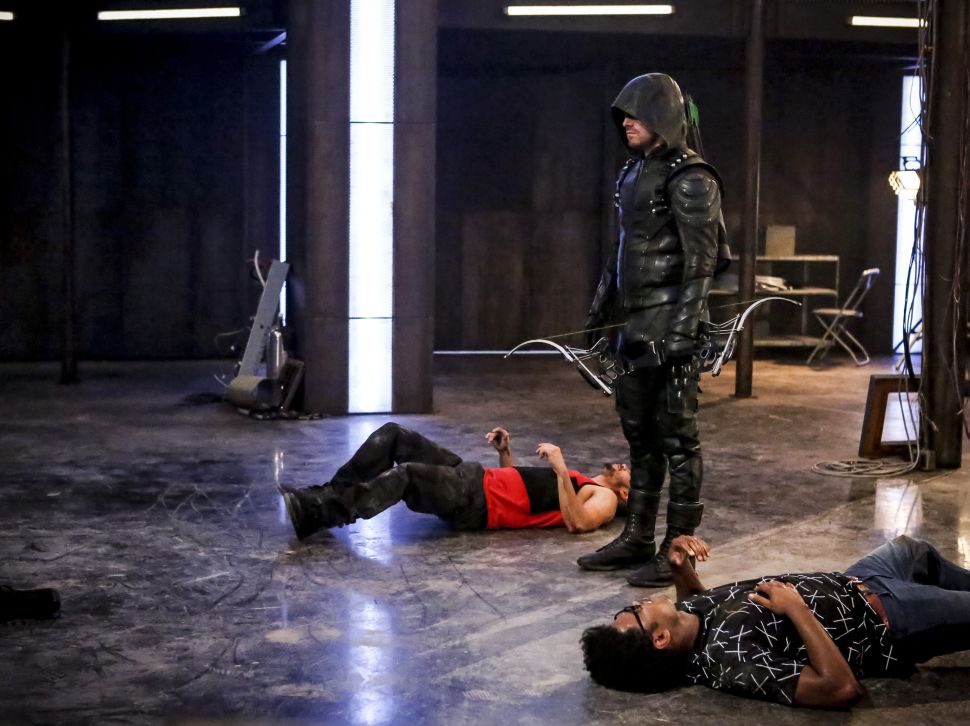