To prepare for these next 20-odd weeks of reviewing Arrow, a show I’d never actually seen before, I binge-watched the series in its entirety–four seasons, 92 episodes, roughly 3,864 minutes of my life but who’s counting–over the course of a month and a half. That, my friends, is a heavily concentrated dose of Queen. I’ve started to hear Emily Britt Rickards sob-talking in my dreams, and have taken to keeping unnecessary secrets from my loved ones to “keep them safe.” It’s been an undertaking, to say the least.

But absorbing its high highs, low lows, and whatever-you-want-to-call-the-flashbacks in such rapid succession allowed me to see clearly Arrow‘s biggest issue: This is a show that has no problems taking character work, story progression and carefully crafted relationships we’ve spent hours with and throwing it all out the window for the sake of drama. It’s a highly-serialized narrative entering its fifth season that treats its story like an anthology series. It’s American Horror Story: My RoyASmoak Nightmare. It’s in some ways both frustrating and fascinating trying to predict which story beats Arrow‘s writers will throw into a hard reset during every season premiere.

In season five’s debut, titled “Legacy”, some of these abrupt character reboots are minor. That downright adorable budding romance between Quentin Lance and Donna Smoak from season 3? Well, Donna’s off-screen tending bar in Vegas and Quentin has returned to both Star City and alcoholism, because there is a mandate in the Arrow writer’s room that Quentin Lance must always be miserable. But some of these character 180s are major and, far worse, they are character beats this show has already beaten so far into the ground they’re popping up in the Hong Kong flashbacks from season 3. Case in point: After Oliver is kidnapped by Star City’s newest kingpin of crime, Tobias Church (played by The Walking Dead‘s Chad L. Coleman, practically sweating charisma), he escapes with Thea’s help by using some strikingly season-one Arrow-esque tactics. Namely, he straight snaps some henchmen necks, tranquilizer arrows be damned.

On one hand, as part of the larger Arrow narrative, it makes sense. I mean, the last time Oliver tried his hand at a more light-hearted, restrained brand of vigilantism his childhood love got an arrow through the ribs and the Earth was about ten seconds from complete nuclear holocaust. So, yeah, back to the drawing board on that one, I’d say. And that’s the thing, has always been the thing, about Oliver Queen: No matter what he or anyone says, part of him, small and repressed as it may be, is still pre-Queen’s Gambit spoiled rich boy with too much money and too little self-awareness. So I fully, one-thousand percent believe that his natural reaction to season five’s status-quo–Diggle and Thea busy elsewhere, Laurel dead, Felicity platonic as hell–is to lash out with extreme violence masked as a “plan.” We’re essentially watching the superhero version of your friend who went out to the college bars like six years after graduation. Boil it down: Ollie is lonely, he’s lost and dammit he misses his bros.

This is an intriguing exploration that, at its best, Arrow pulled off with far more depth than any CW show that gave a salmon ladder its own IMDB credit  had any right to. But it’s exploration we’ve done, a lot. What does Thea tell Ollie here? “Putting killing back on the table is a huge step backwards,” she says, and it is, but its also a step backwards Oliver has been wrestling with since day one. At this point, his character arc is just someone playing with a light switch. Flick he’s dark flick he’s light flick he’s dark flick he’s light.

And this extends to the rest of the crew as well — Diggle and Thea have reverted by and large back to their origins, and both become far less interesting characters for doing so. Again, yes, okay, I understand from a character point of view. John is finding himself again after murdering his own little brother in cold blood by returning to the only life that made sense to him. Thea has that weird problem where she was resurrected by a mystical mountain jacuzzi and living life outside of vigilantism keeps her from uncontrollable blood-lust. Alright, fair on all accounts.

But sometimes going–to borrow a highly touted phrase from Arrow‘s producers in the lead-up to this season–“back to basics” leads to inertia. To borrow another phrase from the episode itself, the shark that does not swim, drowns (which, A) I’m going to need to see some sources on and B) Does not take into account sharks that walk on two legs). I completely understand that on some level, that’s the point episode writers Marc Guggenheim and Wendy Mericle are trying to make with the premiere’s Russia flashbacks. The show can’t move forward until Oliver moves forward, and Oliver, from his earliest days until now, has great trouble moving forward. But–and this is a problem strangely unique to comic book storytelling–just because a character points out a plot point is weird, dumb, or boring, that does not make it any less weird, dumb, or boring. As Felicity, Grodd bless her, tells Oliver here: “It’s called not being in denial, you should give it a try.”

Luckily–or, for anyone looking for an excuse to quit Arrow completely, infuriatingly–take logical character growth out of the equation and this show still boasts an ever-expanding cast breezy and charming enough to elevate most wonkiness to acceptable levels (Echo Kellum is a gift, now and always), not to mention some of the most impressive stunt set-pieces in any show on TV not named Daredevil. That opening brawl between Oliver and Lonnie Machlin was gorgeously shot and paced, and some of the small touches in the closing-minute introduction to this season’s big bad Prometheus were, in simple terms, cool as shit. Did we need the slow-motion shot of that arrow cutting through the rain? No, but just look at it:

The fun thing about Prometheus, besides that bonkers-as-hell fun-house score that blared over his introduction, is that while there is a comic-book character of the same name, Arrow‘s producers have promised we’re getting a completely new villain. It’s worth noting that he initially seems to be a patch-work quilt of every vigilante–good or evil–we’ve encountered before; Green Arrow’s bow, Black Canary’s nightstick, Nyssa and the League’s throwing stars, Malcom Merlyn’s fashion sense. And in a way that’s kind of…poetic? Oliver’s ghosts, his memories, his teammates and enemies, all come back to haunt him at once.

Which leads directly into the most hopeful moments of “Legacy”: Oliver’s putting a team together, a new one, Team Arrow 2.0, which, although the name Wild Dog doesn’t quite make sense for a person wearing a hockey mask and Curtis’s only training is getting his ass kicked, is a decision surprisingly optimistic for both Green Arrow AND Arrow as a whole. Oliver Queen, even being dragged down by four long seasons of indecision, a lifetime of conflicting emotions, might finally be learning to swim. 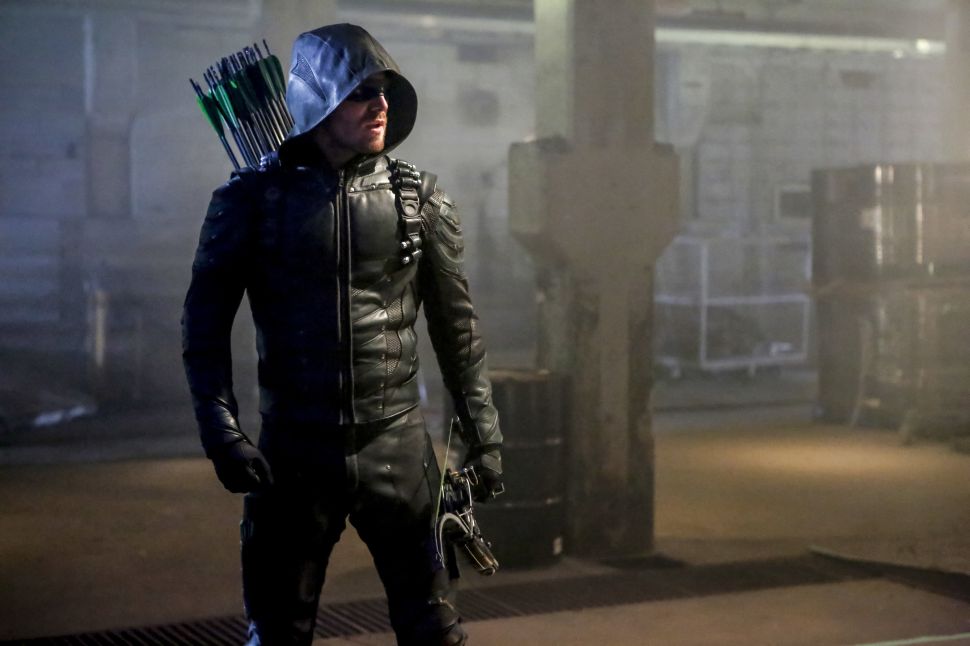