Studies have shown that people tend to some have some of their best ideas in the shower. It’s basically a very wet think tank. But Audrey Gelman had her aha moment in a Starbucks bathroom while changing between work events, realizing that she had “hit a personal low.” You might know Gelman for being named “the girl most likely” by The New York Times after making her mark as a PR specialist on the New York political circuit, or for some of her high-profile relationships (she’s Lena Dunham’s best gal pal, the character of Marnie on Girls is based on her and she briefly dated Terry Richardson). Though she’s had a super successful career, she had no real supportive foundation, like so many women in this day and age of freelance, side hustles and gypsy entrepreneurs. No place where she could regroup between meetings, network with like-minded women and get a mid-day blow out, too. She needed her Cheers bar, but for productive people instead of functioning alcoholics. That’s when she came up with the idea for a club, exclusively for women, that could fulfill all of those needs. Located on on East 20th Street in Flatiron, the members-only club is called The Wing and Gelman opened its doors this month.

In her research, she realized that women’s clubs already existed, but they seemed to have fallen out of fashion. ” I learned about the history of the women’s club movement–a slice of women’s history I hadn’t known about before. Between 1890 and 1920, there were over 600 women-only clubs of various types in New York City; by the 1930’s [there were] over 5,000 nationwide,” she told the Observer. Originally, these clubs were intended to give women a chance to pursue literary, philanthropic and artistic endeavors (they actually met under the title of literary clubs) and to network with like-minded contemporaries. But by the mid ’60s women’s clubs were beginning to evolve from social gatherings to the foundation for the second wave of feminism. Sadly, they seemed to fade out of existence after that.

Gelman argues that women’s clubs are needed now more than ever, which explains why she and her co-founder Lauren Kassan and General Manager Marianna Martinelli are determined to bring them back. “We have a simple mission, which is to allow women to take up space. There’s something subtly radical about the idea of women taking up space. Beyond that, I hope it serves as a space that satisfies both the need for convenience in women’s lives and connection between women who wouldn’t normally meet, but find they have much in common,” she said. The convenience factor is obviously appealing for anyone that doesn’t have an office and ends up carrying everything they need for their entire day in a giant bag (only the Olsen twins can really pull off that look.)

Though it seems like there are new coworking spaces popping up everyday that could also serve as a home base, that strong female empowerment vibe that The Wing provides is absent. As Feminist Fight Club author Jessica Bennett pointed out some of these modern, laid-back work spaces don’t always promote the most female-friendly atmospheres with keggers and pool tables scattered about. But The Wing, with its Valley of the Dolls pink couches, Nancy Meyers lighting and Pinterest-worthy book shelves, is no ordinary co-working space. This is a place for ideas to spark and minds to meld.

The opening party sleepover (yes you read that right) was like a Mensa meeting….with pajamas and snacks. The upcoming roster of activities for members is enthralling, to say the least, and can hardly be written off as frivolous or girly. The inaugural Wing Book Club will be hosted by Porochista Khakpour and feature Alex Mar, author of Witches in America (many of the events this month center around witches, which is fabulously topical and just plain Halloween fun.) “Tina Brown, Liz Meriwether and Annie Karni of Politico will be holding a discussion around women journalists and 2016. I will personally be attending Poker 101, and an upcoming Mahjong class, as well as a speaker series on Power, Power and Respect with Mona Scott Young, creator of Love and Hip Hop,” said Gelman. Yes there are crafting workshops and braid bars, but you can also meet with women like Zady founder and venture capitalist Soraya Darabi for an Office Hours meeting, an ample opportunity to gather some fundraising tips.

Gelman has built an environment where the next SoulCycle can be dreamed up (Julie Rice and Elizabeth Cutler are investors in The Wing, by the way) or perhaps a new, big, life-altering app. “We hope women will respond to the idea of working among other self-identifying women and being part of a unique community. We also have showers, a locker room, a room dedicated to hair and makeup, tons of products that smell really good, non-profit partners who are working in women’s advancement and a library made up entirely of women authors,” said Gelman. Free coffee and snacks are one thing, but no one should underestimate the power of nice-smelling hair serum in a tranquil, safe environment.

Plus, having a squad that is also ambitious and carving out their path in various industries is a great group to have, especially during this rather turbulent time. “At a time when a man who ran beauty pageants and jokes about sexual assault is thisclose to being the president of the United States, women are finding comfort in affiliating with other women. We’re starting to hunt as a pack,” said Gelman.

And though Gelman and her fellow founders are millennials don’t assume that The Wing has an age limit. “We believe that the richness of The Wing comes from the eclecticism of our members. Right now, The Wing has members from ages 22 [to] 78. Professions range from physicians to social workers to teachers to film directors, editors-in-chief, business executives, jewelry designers and robot engineers. So far, members have been coming for a few hours, taking meetings with other women, working on their laptops and sometimes hopping in for a quick shower before they head to whatever is next.” And they will be prepared, empowered, and smell good, for whatever comes next. 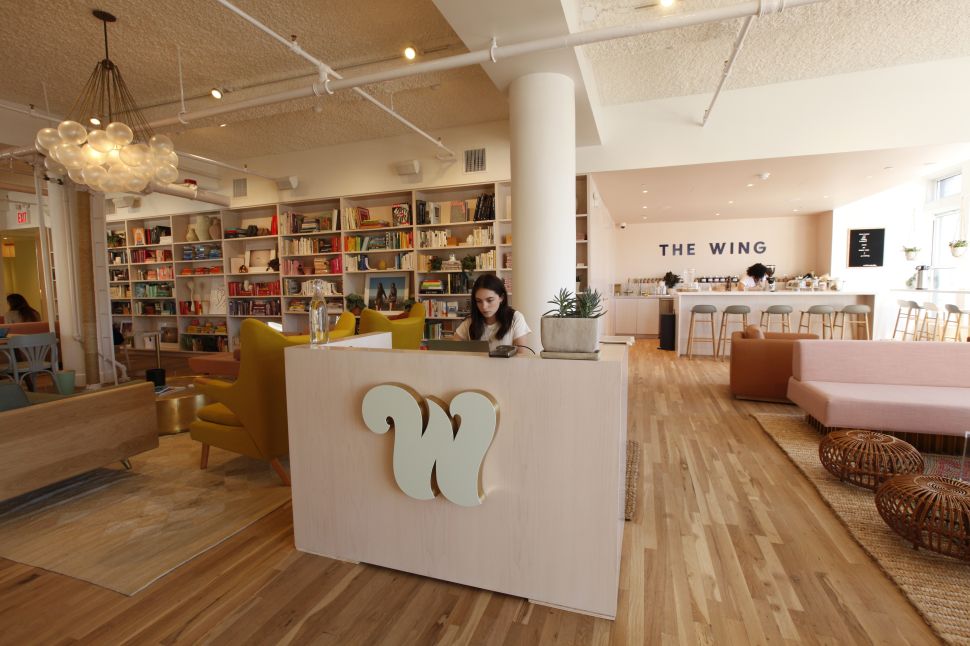