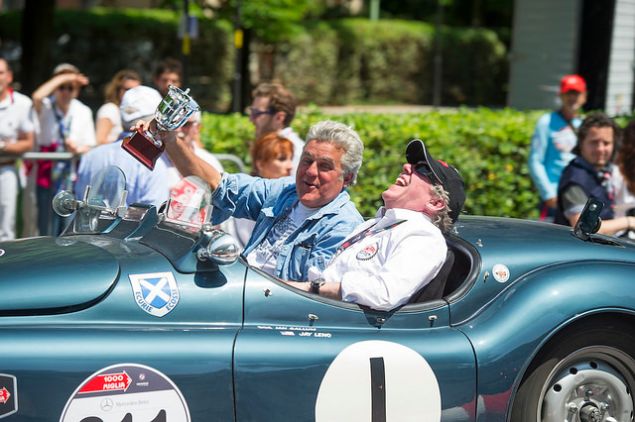 “That’s what my wife always says—‘Why are you buying another car?’” classic car enthusiast Jay Leno told the Observer.

Probably, many women can sympathize with the comedian’s wife. Leno is the owner of approximately 150 automobiles, 117 motorcycles and a few steam engine cars that he stores and restores in a massive garage in Burbank, Calif. And sure, there are women here and there who collect classic cars, but this otherwise is definitely a “guy thing.” And at times, collecting cars is a very rich guy thing, since the prices for particularly rare and legendary vehicles can soar into the seven and eight figures.

The median price of the automobiles sold each August by RM Sotheby’s—a collector car auctioneer, formerly RM Auctions, that was partially acquired in 2015 by Sotheby’s and then renamed—at its annual auction in Monterey, Calif., nears $1 million. Perhaps on the more affordable side is RM Sotheby’s upcoming sale—October 6 and 7—at the Hershey Lodge in Hershey, Pennsylvania. The auction, which takes place during the Antique Automobile Club of America’s eastern regional fall meet has a median price is closer to $200,000-400,000.

At car shows like the upcoming event in Hershey, vehicles get evaluated by judges on the basis of condition, cleanliness, originality (particularly the chassis and engine) and the quality of workmanship (repairs and restoration). State governments do not require these cars to have catalytic converters installed, and owners may purchase lead additives to make today’s fuel work. When an antique vehicle has upgraded components, it is viewed as a “custom” car, rather than as a classic, which lowers its value. Of course, it is the rare collector automobile that hasn’t been worked over to some degree, requiring a balancing act on the part of owners. Original parts give car owners extra points, but certain parts do need to be replaced, either from wear or for reasons of safety. “I put four wheel disc brakes on a 1957 Chrysler Imperial, which obviously weren’t on the car when it was first made,” Leno said. “Originality isn’t as important as not getting killed.” At times, the cost of ownership exceeds the price paid for the vehicle.

Car collectors find vehicles to buy at car auctions, through newspaper ads and at car shows, and the prices range widely. At the high end, a Jaguar D-Type XKD 501, which won the 1956 LeMans, fetched $21.78 million at RM Sotheby’s at the recent Monterey Car Week (August 15-21), the highest price ever paid for any British car and eclipsing the previous record by more than $7 million. Other collector vehicles can be less costly. “A Model T Ford can go for between $5,000 and $50,000,” said Ian Kelleher, a managing director at RM Sotheby’s. “You can buy a fun classic car for $10,000.”

Another person who can sympathize with Leno’s wife is probably Kelleher, who noted that “practicality tends to be a secondary concern to most buyers, who generally own more than one.” Buyers may not have a garage large enough to house these cars (“It’s not the end of the world to leave them outside,” he said) or know how to fix or restore them. Driving them on a regular basis may subject them to damage, and the specialty classic car insurance that most serious collectors buy actually prohibits “use for daily driving to and from work or school, routine shopping, etc.” These are show horses, not ones to pull the plow.

Still, they do get driven, because “they operate best when they are used,” he said. “You can put a work of art into storage for five or 10 or more years, and it will come out looking just the way it did when you put it in, but if you store a car for five years, it will likely require a lot of work to get it going again.” The name of the game is striking the right balance between use and over-use, as well as with car collecting and the rest of one’s life. 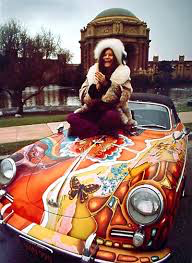 The fall meet in Hershey includes a race car run and a “car corral” in which awards will be presented by judges, as well as other forms of entertainment: exhibitions at the local Antique Automobile Club of America Museum, a ladies luncheon, movie night and a banquet.

Exotic and sometimes quite expensive, collector cars tend to be considerably less expensive to insure than daily driven vehicles, according to McKeel Hagerty, president and chief executive officer of the Traverse, Michigan-based Hagerty Insurance Agency, the dominant insurance underwriter for collector wooden boats and classic automobiles. On average, collector car policies are half of what people pay on a standard vehicle, because they are driven much less and are highly cared for as compared to the household runabout. The average annual premium for a 1954 Chrysler Custom Imperial worth (and insured for) $30,000, for instance, is $365. (I pay more than twice that for my 2002 Toyota Corolla.)

The typical guys who collect cars are “right around 50 years old, with a median income of $120,000,” Hagerty said. Currently insuring 1,200,000 cars in the U.S. and adding 150,000 new policies every year, Hagerty periodically surveys the collector car market, finding that car guys really like Corvettes—“the most collected automobiles in the U.S., followed by Mustangs,” he claimed—and, if they collect anything else, it is probably watches. “They like mechanical things,” he said, adding that “a lot of them are only into cars and not much else.” Interestingly, the percentage of collector car owners who actually do go under the hood and fix and restore their prized vehicles is declining. “More and more, they rely on mechanics.”

Not that many of these collectors don’t open up the hood and take a look. “I’ve taken my tools and gone in,” said Bruce Meyer, a 75 year-old southern California real estate investor and board member of the Petersen Automotive Museum in Los Angeles, “but it gets expensive, because I then need to hire someone to put it back together.” His main interest is aesthetics (“I have to like the look of it”) and a car’s history. He specializes in collecting race cars that have won events at the Bonneville Speedway in Utah and at LeMans in France. It is a vicarious thrill to imagine each of his 20 or so cars outdistancing the rest of the field, and it gives him stories to tell at the various car shows and car club meetings he attends. “It’s not a loner’s hobby,” he said.

At Monterey Car Week, there are numerous auctioneers selling classic cars, not all of them generating the same totals as RM Sotheby’s, although not that much lower (the average sale price during the week was $479,642). Hagerty noted that Monterey “is not an entry-level event.” A car collector himself, Hagerty purchased his first automobile, a 1967 S Model 911 Porsche, in 1979 at the age of 12, spending $500 that he had earned mowing lawns. “I worked on it with my dad, and obviously, I couldn’t drive it for a few years.” He still owns the car, estimating its current value at $300,000.

Like any other avocation, classic car collecting is replete with organizations to join (Auburn Cord Duesenberg Club, Buick Club of America, Checkered Flag Club, Chrysler Imperial Club, Citroen Car Club, Corvair Society of America, International Station Wagon Club, Porsche Owners Club, and on and on), shows to attend in almost every state in the union (there are 53 that take place annually in Illinois, just beating out Massachusetts’ 52) and all those opportunities to impress one’s friends and neighbors. “It allows you to have quite a social life,” Kelleher said.

And, as in every other realm of collecting, classic cars have their categories. Automobiles produced prior to 1905 are called “Edwardian,” and the “brass era” or “veteran” designation refers to 1905-1915 vintage vehicles. Every November, a 60-mile veteran car “run” takes place between Hyde Park in London and the seaside town of Brighton. (“It is the slowest race you will ever see,” Kelleher said.) The “classic” period dates from the mid-1920s to the mid-1950s, and after that many still get called classic, but not by purists.

That classic period evokes considerable nostalgia by many collectors—recalling a time when everyone drove cars like this—even though, with a media age of around 50, most of these collectors weren’t alive or paying attention to automobiles when these vehicles dominated the roads. Leno said that working on a classic car helps him identify with “the person who originally put this car together from a variety of parts. You take out a transmission from some old car and realize that some guy once had been paid $150 to put that transmission in.” 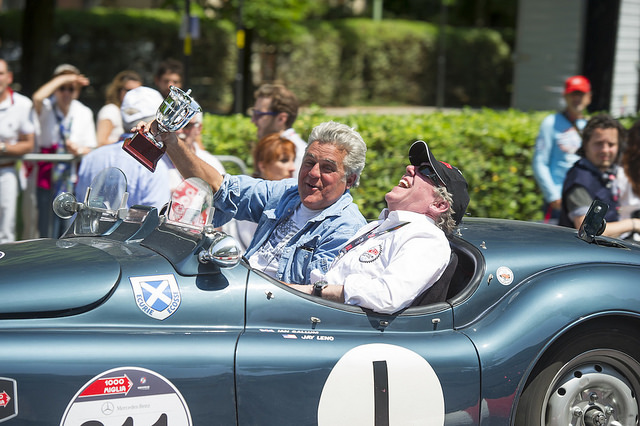