While Donald Trump was taking American politics into the gutter with his all-out attack on Bill and Hillary Clinton in the presidential debate, he often invoked the name of Bernie Sanders to purportedly promote his cause.

While Hillary Clinton launched her attacks against Trump and fended off his attacks against her, she proudly reminded viewers of the enthusiastic support of Bernie Sanders for her candidacy.

Evaluating the debate itself is easy. Trump helped himself by mobilizing the GOP base with his attacks against Clinton, but he ultimately destroyed his candidacy by acting so negative and hostile that many women, moderate Republicans and political independents will never vote for him.

Clinton helped herself by winning the debate on points according to some reputable early polls and maintaining her significant lead. But she left the debate with her unfavorable ratings intact and dangerously high for a candidate poised to win a major victory in the election, who will almost certainly have to govern a divided nation from a position of weakness.

Bernie Sanders, by contrast, entered and left the debate as the most trusted and favorably viewed leader from either party in presidential politics. To be praised by both candidates while they sling mud against each other in the most distasteful debate in presidential campaign history is an achievement of the first order of magnitude that tells a great truth about where the American people stand.

Sanders—not Clinton or Trump—stands for a true populist agenda that has huge national appeal.

Sanders—not Clinton or Trump—stands for the politics of integrity, conviction and goodwill that voters hunger for in our politics today.

Sanders—not Trump or Clinton—fights for the people against special interests without a drop of equivocation or two-faced maneuvering.

Sanders—not Trump or Clinton—believes in dramatic change that would provide a true revolution against the political and financial status quo that voters detest.

It was a staggering irony and brilliant revelation to watch both Trump and Clinton refer to Sanders with admiration while they expressed total contempt toward each other.

As I have repeatedly noted for the last year, the most important political fact in the campaign is the degree that Sanders walloped Trump by huge margins, usually between 10 and 20 points, in virtually every match up poll throughout the campaign.

Considering the latest revelations about Trump’s behavior toward women, a problem I wrote here last week will ultimately doom his candidacy, if the Democrats had nominated Bernie Sanders for president his election day margin over Trump would probably approach 15 percent or more.

Going forward in the presidential campaign, the strong, enthusiastic and unconditional support of Sanders for Clinton is one of her strongest assets. The more Trump quotes, praises or mentions Bernie the more Bernie will barnstorm across the nation for Clinton. The more Clinton praises Bernie and carries forward his agenda for a progressive populist revolution, the better she will look in the eyes of voters.

Going forward after the election, when Congress returns from its latest long recess and when the new Congress is sworn into office in January, the voice of Bernie Sanders will resound through the capital and the case for the Sanders revolution will be heard across the nation.

In my view, the presidential campaign is effectively over. Trump has lost. The more he plays to his base with a campaign of hatred against the Clintons, the more Democrats will rally to vote and the more women, independents and younger voters will gravitate toward and solidly behind Clinton.

In this probable scenario Clinton will be elected, possibly by a large margin, but will assume office with the highest negative ratings in presidential history, which will make the support of Sanders and his supporters as important to her presidency then  as his campaigning is vital for her campaign today.

The contest to watch today is the contest for control of the Senate and House. Republican candidates are forced to defend Trump every day, and every new gaffe or revelation will lead to even more of the the almost biblical exodus of Republicans saying they will never vote for Trump.

While Republicans are tormented by their ties to Trump, Sanders will be barnstorming across the country on behalf of Democrats running for the House and Senate, while he continues his vigorous campaigning for Clinton. He is joined by other liberal luminaries ranging from the increasingly popular President Obama, the widely admired first lady Michelle Obama, the brilliant populist leader Sen. Elizabeth Warren, and former vice president Al Gore, who will warn voters from experience to not waste their vote supporting Gary Johnson or Jill Stein—which he will correctly argue only helps Trump.

At the end of last night’s debate the only person standing with pride was Bernie Sanders, the voice of progressivism and populism that both candidates cited with approval in a debate that was disgusting, in an election that most voters consider repulsive, for a nation that hungers for the civility, championing the kind of change that only Sanders offers voters desperately crave.

Make no mistake, the only true winner of the Trump-Clinton debate was the gentleman from Vermont. 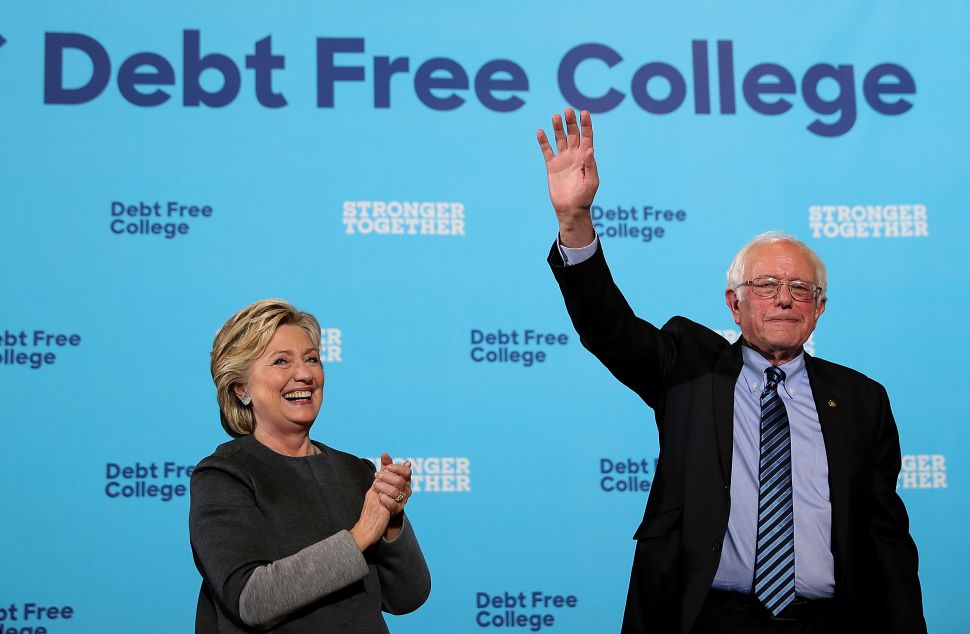