Going into the first presidential debate last month, most observers were ready to grade Donald Trump on an extreme curve. If he managed to extrude just a few quasi-coherent statements, present even the faintest semblance of dignity and decorum, give only the vaguest impression he had attempted to educate and prepare himself to discuss the issues in a shallow, cursory manner—in short, came off briefly as anything other than loutish, ignorant and laughably unqualified—most pundits probably would have called the initial showdown with Hillary Clinton a draw.

Even by that skewed standard, he failed spectacularly. In fact, he failed in ways not previously imagined possible, as the 70-year-old presidential candidate spent the ensuing week picking a fight with a Venezuelan beauty queen and tweeting in the small hours of the morning about sex tapes.

Going into tonight’s confrontation with the ex-secretary-of-state, Trump enjoyed no such luxury. Any ground Indiana Gov. Mike Pence might have recovered with his strong showing in Tuesday’s vice presidential debate against Virginia Sen. Tim Kaine melted away completely on Friday—when a 2005 video surfaced in which Queens-born businessman described how his fame enabled him to kiss women without permission and even “grab them by the pussy.”

His campaign spent the next 48 hours in a kind of cardiac arrest, and flailing in the media as it hemorrhaged support and endorsements from Republicans desperate to save their own careers. Trump tonight needed, for the first time in his 36 years of fame, to convey shame and sorrow and penitence and sincerity to all women, while at the same time fending off the inevitable attacks from the first female major party nominee. He needed to prove he could present a credible vision of his presidency without a teleprompter to prop him up. He needed most of all to convince voters that a crude, philandering, thrice-married, four-times-bankrupt developer-turned-failed casino magnate-turned-gameshow host-turned-conspiracy theorist could somehow possess the intelligence, the gravity, the wisdom and the disposition to lead the foremost nation on the planet, a country of some 320 million people, home of the world’s largest economy and custodian of its second-biggest nuclear stockpile.

Less than an hour before the debate was set to start in St. Louis, Trump decided to hold a surprise press conference alongside three women with decades-old sexual assault claims against former President Bill Clinton—Paula Jones, Juanita Broaddrick and Kathleen Willey—and a young girl whose alleged rapist Hillary Clinton successfully defended. The strategy was to depict the former first lady as an accomplice to a cover-up, undermine her moral high ground and turn the forum into a mud-wrestling match. The Clinton camp reacted by labeling it “Trump’s latest act of desperation” and the last leg of his “destructive race to the bottom.” There are also several outstanding rape allegations against the businessman.

This telegraphed his strategy for deflecting questions about the tape: call attention to the former president’s similarly predatory behavior and to his wife’s dirty laundry. The two candidates didn’t shake hands when they came out onstage.

But the Trump who addressed the audience wasn’t the brash trash-talker who has inflamed the nation—no, this Trump was hoarse and puffy-eyed, his every statement punctuated with conspicuous sniffles. But whether he had practiced reining in his interruptions and groans from the first face-off, or was just too tired to muster the bluster, the change in demeanor worked to his advantage.

That was Trump’s answer after moderator Anderson Cooper asked three times whether he had actually taken part in the activities he described in the 11-year-old footage. By way of getting to that response, continued to dismiss the comments as “locker room talk” and assailed former President Clinton for his behavior and his wife for her legal work.

“There’s never been anyone in the history of politics in this nation who’s been abusive to women,” he said.

“It represents exactly who he is. Because this is what we’ve seen throughout the campaign,” she said. “So, yes, this is who Donald Trump is.”

Oddly, Clinton didn’t avail herself of the opportunity to remind the audience of the tape later in the debate. Even when Trump repeatedly tarred her for using a private email server at the State Department, she only alluded to the footage vaguely later on in the forum.

“I know you’re into big diversion,” she said.

Clinton used a question about the Wikileaks release of excerpts from her speeches to major financial firms as a pivot to point out Russian hackers were likely behind the document drop—and to hit Trump for his past praise of Vladimir Putin and for refusing to release his taxes.

This prompted Trump to utter the astonishing statement “I know nothing about Russia” (which he retracted, then repeated) and to ramble about how the U.S. government signed off  his “balance sheet” when approving his plan to develop the Old Post Office Pavilion in Washington D.C. And the candidate even wound up contradicting his own vice president on collaborating with Russia in eliminating the Islamic State.

But he hit Clinton repeatedly as the architect of President Barack Obama’s foreign policy, which he asserted had enabled the birth and growth of the Islamic State. He also repeatedly slammed the Joint Comprehensive Plan of Action on Iran, which ended sanctions on the Shi’ite theocracy in exchange for a ten-year pause in their nuclear program, for allowing billions of dollars to flow into the former pariah state. He also accused the administration of allowing America’s nuclear might to atrophy in the face of Putin’s explosive atomic rearmament.

Clinton only once defended the Iran pact, and generally denounced Trump’s tirades as lies.

There were some genuinely bizarre Trumpian moments in the debate too. When Hillary Clinton said “it’s awfully good that someone with the temperament of Donald Trump is not in charge of the law in this country,” the Queens-born businessman answered it was “because you’d be in jail.”

When questioned about his proposed “complete shutdown” on Muslim immigration, Trump inexplicably said the idea had “morphed into extreme vetting” (even though the press release about the recommended moratorium is still on his campaign site). He did manage to run through a number of fear-inducing (and largely inaccurate) claims about the danger Syrian refugees pose, however.

He pivoted on a question about his red-eye online rant against Machado, and instead rattled on about the infamous 3 am call to the State Department about the attack on the American embassy in Benghazi. And he insisted Clinton’s reference to his 50 percent of his followers as “deplorables” was proof that “she’s got tremendous hatred in her heart.”

But the most memorably strange moment of the forum came after Clinton defended the comment in one of her Wall Street speeches that politicians need to have a public position and a private position on key issues. She argued that it was an allusion to how Abraham Lincoln had manipulated Congress to ensure the passage of the 13th Amendment, banning slavery.

“She lied, and now she’s blaming the lie on the late, great Abraham Lincoln. Honest Abe,” Donald Trump said in his response.

Trump also essentially confirmed a New York Times report that he had used a nearly $1 billion tax write-off in the 1990s to enormously reduce his payments. Still, he insisted he paid “large numbers of taxes”—and parlayed it into a decent dig against Clinton for taking fat contributions from the financial sector, and to brag that “nobody knows the tax code better than me,” one of the core arguments for his candidacy.

The debate at times seemed almost to be as much a clash between the candidates and the moderators as between two people running for president. Both Clinton and Trump exceeded their allotted time on nearly every question and demanded the right to rebut their opponent.

Asked about the unfolding humanitarian crisis in Syria, Trump went on an extended riff and hit a number of fairly potent talking points, only to have moderator Martha Raddatz puncture the moment by reiterating the question.

Trump repeatedly insisted Cooper and Raddatz were cutting him off more than Clinton, and even suggested it was “three against one.”

Beating up on moderators is a time-honored Republican primary debate tactic. We’ll see how it comes off with the general electorate.

A question about escalating healthcare costs brought about a rare discussion of how the candidates would actually address domestic concerns. Clinton acknowledged flaws in the Affordable Care Act, but insisted repealing it would strip millions of coverage and legal protections. Trump, by contrast, argued prices would decrease and coverage improve if Americans could buy private insurance across state lines and that the poorest could receive coverage through block-granting greater Medicaid funds to the states.

“Block-grant” is usually a magic word in Republican circles. But GOP sorties against Obamacare usually note most of the newly insured are simply signing on for Medicaid—meaning this line might appeal to the average person seeing their premiums go up, but it seemed to horrify conservative ideologues on Twitter.

Near the end, the pair discussed energy issues. Trump again blamed overzealous regulators for wrecking the coal industry and repressing natural gas development. Clinton countered by launching into a wonkish dissertation on how global market forces are to blame for depressed fossil fuel prices, and economic suffering in the Appalachian mining belt.

Trump was clearly less knowledgeable than Clinton, but he managed to stalemate her.

In short, this was the performance Trump needed in the first debate. 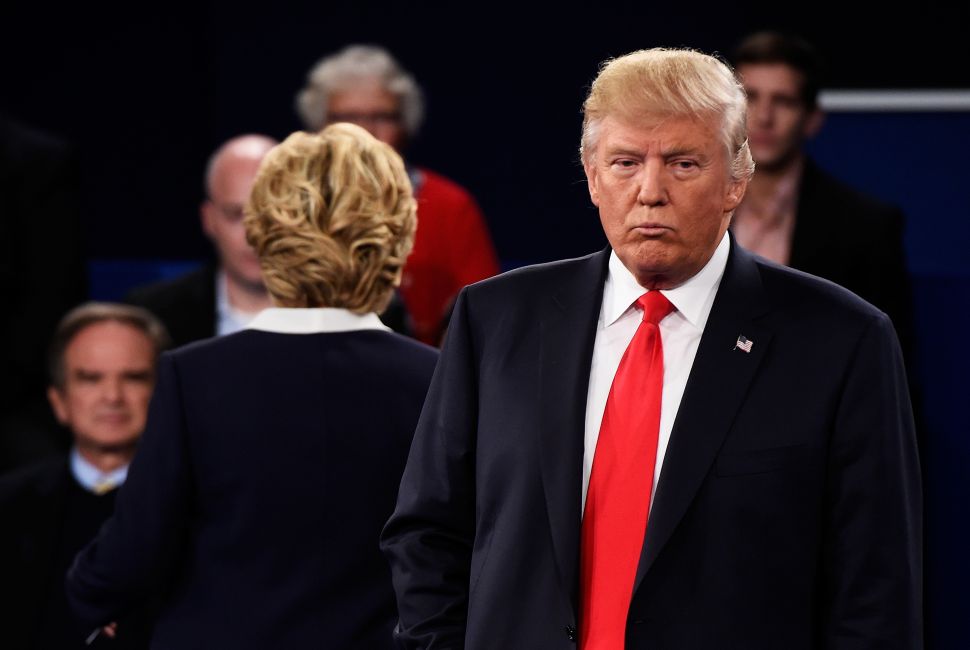