In a quiet moment away from the hordes of ravenous Deadites (also known as the New York Comic Con crowd), Bruce Campbell–face of Sam Raimi’s cult-classic Evil Dead franchise–sat down with the Observer for an in-depth talk on fandom, fear and fighting the Evil Dead for 35 years.

Is there anything at these cons the fans could do to surprise you?

You know, I get it. None of it bothers me. I’m used to people who are sleeved up one side and down the other, pierced in every orifice. Austin was my record for body parts. I signed eight different body parts. They’d go out and get it tattooed, then they’d come back in with the plastic wrap around it, with their festering tattoo, and show it proudly. And I’m like ‘Yeah, let’s do it.’

But really, fandom has become much more acceptable. I think Hollywood is run by geeks now, for geeks. And geeks isn’t really a negative connotation anymore. Geeks just means ‘I really love some of this type of stuff alot.’ The camaraderie at these things is awesome. Some fan explained it, they can show up to a convention and instantly have a thousand friends who will not make fun of them. They’ll hook up, there’s sex going on at these things. They’re up all night role-playing, with the costumes on.

It’s interesting, because for some reason people it’s about seeing how the sausage is made. They know the box office figures. When I was a kid, Poseidon Adventure, I had no idea how much the opening weekend was. I had no idea how much it cost, because they’d never tell you. Or how much it made. You’d have to read the trade papers. Now, every kid at the mall, “Ah, well, too bad about this movie, it tanked because it cost too much.’

Yeah, but that’s okay! None of it bothers me, it’s just more people talking about movies and entertainment. Nobody is paying anything, though. Now you have a thousand channels–good news, there’s work out there–bad news is with 400,000 people watching your show you ain’t gonna get that much for advertising. So good news is you’re always getting work, bad news is you’re not getting paid what you thought you were.

But, in success, all boats will rise.

There’s that idea of the TV bubble that’s going to burst soon.

How will it burst? I want Starz to announce multiple seasons of Ash vs Evil Dead, so that our fans will go “great, I can get to it later.” Because I know there are two or three shows in front of our queue, but people will get to it. But I’m doing Parks and Rec first, then I’m gonna do this show, then I’ll catch up on Mad Men, and then I’ll binge Ash vs Evil Dead. I want the fans to know it’s going to be there waiting for them.

So really, the ratings are weird now, how they judge the success of your show. It used to be bang, next day at 3 o’clock you check the ratings. “Oh my God, we suck!” Now, I think it’s more what makes the needle move on social media.

They have to. They have to, because that’s huge. How else do you do it? Look, the Nielsen rating system has always sucked. One box every 950,000 households or some horseshit like that? Guys plugging it in to their other phone line, making calls to the Philippines. What kind of a system is that? Whereas, you look at Netflix. Why are they in the entertainment business now? Because they’ve collected your data. They know the number one romantic comedy ever rented.

That’s why it’s so confusing when a show gets cancelled these days. Sometimes you’re not even sure why.

Spartacus was cancelled. And then they got into syndication through Syfy, which went through the roof, and they went “Whoopsie!” But whatever they were tracking wasn’t showing up. What was the show that got cancelled, then got crowdfunded for a 7 million dollar movie?

I have to imagine that fandom is a big reason Ash vs. Evil Dead exists.

Well the fans are the reason it happened, mostly. It was very organic. The series basically died after Army of Darkness. It was a 13 million dollar movie, which we thought was a lot at the time, and it only made about 13 million. So, that’s not good math. It killed it. It festered for a while. I go to conventions a lot every year, so I kind of have my finger on the pulse. And they’ve never shut up. They’re like “Oh yeah, you did Burn Notice, good for you. Oh, yeah, Sam you did those Spider-Man things, good for you. When’s the next Evil Dead?”

We probably pitched Ash v Evil Dead to about half a dozen interested parties, the key question being, “what’s the content restriction?” The first two Evil Dead movies had no rating. Only Army of Darkness…the third one was a whole studio movie, we had to deliver an R rating. We had talking skeletons, you lop their head off and dust comes out.

How hard was it, getting Army of Darkness to an R rating?

When we submitted it, they gave us an NC-17. We’re like, what do we have to cut? They had the balls to say it was the “cumulative effect.”

So it was just everything.

We were like, ‘Talking skeletons, is that going to scare someone?” We went around the ratings board for the first two. Don’t forget that they do take notes. So they were like “Oh, this is another Evil Dead movie, isn’t it? Well, you didn’t come to us for the first two. You’re gonna get it with both fucking barrels in the face now.” Whereas, Goodfellas’ opening scene; guy is in the trunk, Joe Pesci stabs him 15 times while he’s swearing at him. That’s an R rating.

There’s no cumulative effect in Goodfellas?

Right? Fuck you, ratings board.

That’s interesting, because Evil Dead all the way through the TV show has been violent, but never lost a sense of fun. Where is the line, between gory and graphic?

I don’t like torture porn. Where you put a guy’s dick in a vice and poke it with a stick for 30 minutes. That’s fine, that’s your subject matter, but it’s lazy filmmaking. Where is the suspense? Where is the buildup? Where’s the surprise? It takes much more filmmaking skill to make tension rise over a period of time, and to build it up to a scare. A moment that makes you jump in your seat, that takes filmmaking expertise. It’s not something you can just randomly shoot and get lucky. It’s not so much about the subject matter, I just think there’s a lot of lazy filmmaking out there.

What state do you think horror is in right now?

It’s not bad, because it’s out of the shadows. Evil Dead 1 just got unbanned in Germany about a month ago. That’s how many years, from 83? We can actually thank The Walking Dead. I will always refer to them as our “brothers in The Walking Dead.” Greg Nicotero, who runs the show now over there, he goes back to Evil Dead 2. And what they’ve been able to do over there is take horror, and make it mainstream. If you have 14 million people watching, that’s not a cult show anymore. That’s like Roseanne.

It’s interesting you mention the term “cult”, because that almost doesn’t mean anything anymore. You feel sometimes movies are trying to be a cult movie.

You should never, ever try. Just make the movie. Movies are hard enough. You think when we were making Evil Dead, we were like “Oh yeah, let’s make a cult classic”? Those words didn’t even exist in 1979. We were just like, “let’s finish this goddamn movie. Then it will become what it will become.”

Are there moments filming Ash vs Evil Dead that take you right back to 1979?

Sam directed the pilot–which was important to us and I think the fans, too–and we shipped the original 1973 Delta 88, Sam had held it in his personal storage for years. We put it on a boat, and shipped the thing over. Shooting Evil Dead, when the key was in the ignition you’d hear a very weak “Eeeeeeeee.” The art department on Ash vs Evil Dead had dressed the car for us to come look at, and I opened the door and there was that same sound. I was like “Oh my God, Sam, that’s the same sound from when your mother drove us to see A Clockwork Orange at the Birmingham Theater in high school.” Those moments, there’s no acting required.

There’s an Easter Egg later this season, and me and the actor who is involved in that upcoming Easter Egg, we looked at each other like, “Wow, nothing’s changed in 35 years. Here we are again.”

If you told pre-Evil Dead Bruce Campbell you’d be talking about Ash Williams 35 years later, what would you say?

I’d say it’s possible. When we were making Evil Dead, we kept running out of money. There was definitely a point where we figured this was a nice try, but this isn’t going to be released. I had to take advantage of my father–who had just gotten divorced–and ask if he could put up some property in Northern Michigan, to get the film from 16mm to 35mm, which is about a $50,000 process. His property would have been on the hook if we failed. There were some grim days.

So I’d say, “it can work, it is possible. What you thought you could achieve you can do. But it ain’t gonna be easy.”

And what would he say?

Oh man, he’d be very happy. Because that was the whole plan. To be an actor. I didn’t know how to break in. The idea of moving to Hollywood and auditioning for movies seemed like even more impossible than making a movie.

It wasn’t ever about any notoriety or money. I’ll tell you when it really happened for me. The first Evil Dead got a local distribution in our neighboring area in Detroit. I went to the Showcase Cinemas, where I’d watched all the movies of my formative years, every single one, and I watched a matinee of Evil Dead. And it was in an actual theater, where I’d watched other actual movies, and there was only about 15 other people in the theater. And I didn’t give a shit. Because that was the moment. 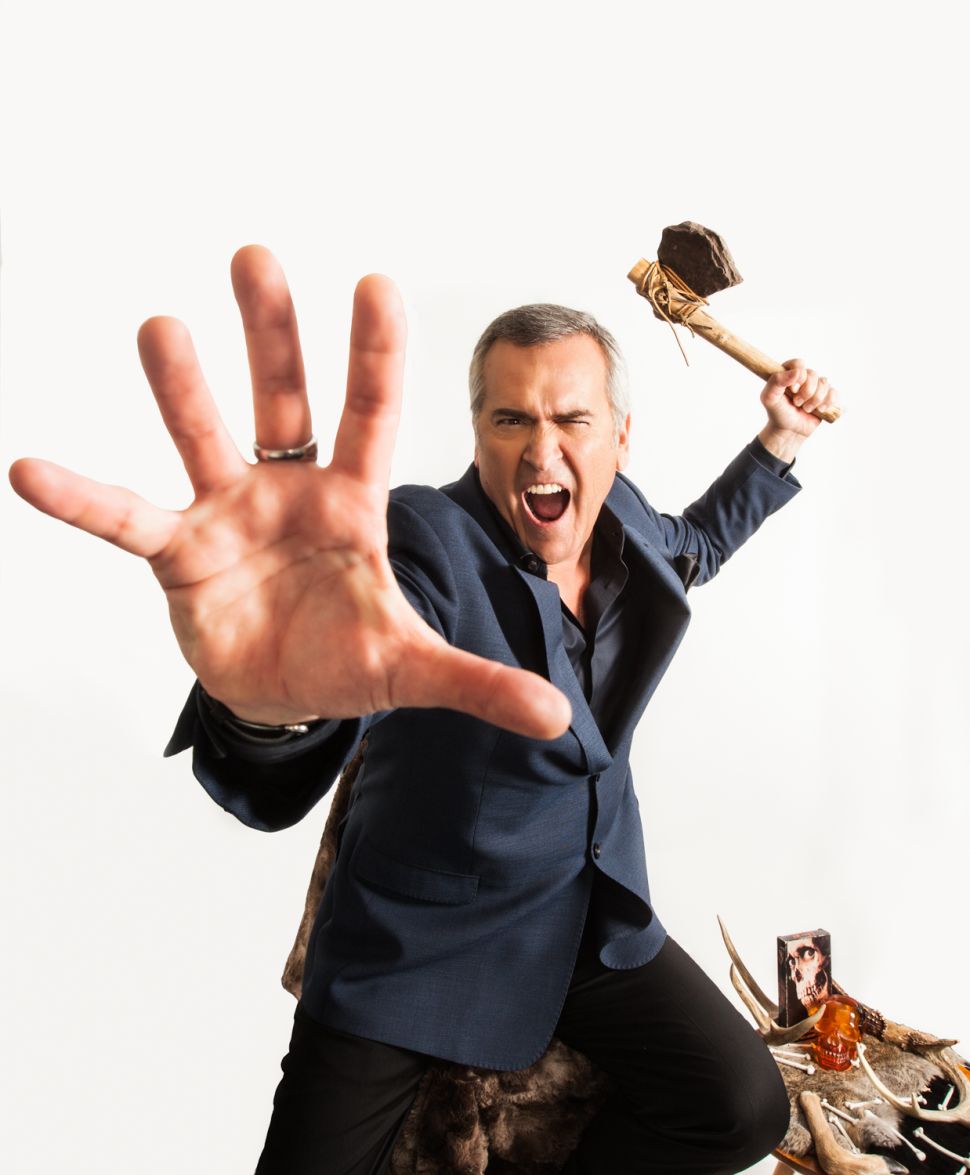