Trying to figure out how to become a synchronized swimmer like the @aqualillies . So excited about our partnership with @spotify 🐝X🎧=👌 (thanks for a great event @thenewyorkissue @talayasseri 💛)

Whitney Wolfe has always been a planner. Though the Salt Lake City native says she never thought of herself as a business-minded person, her father instilled in her, from a young age, that earning a living in this country is difficult. A teenage Wolfe probably couldn’t have conceived that she would go on to found the dating app that essentially started the million dollar culture of swiping right or left to find a mate. As one of the original co-founders of Tinder, Wolfe’s entrepreneurial spirit was strong from the beginning. By the time she had graduated from Southern Methodist University as an international relations major, she had a few business ventures under her belt and helped launch Tinder before the age of 25.

Though she left Tinder on a very public note—she filed a major lawsuit alleging sexual harassment and discrimination—it didn’t slow her career down at all. Though she was toying with the idea of creating a bullying prevention app for young women, she decided instead to found Bumble. It was another dating app, except this one gave women the power, by requiring them to make the first move. A put together, fast-talking, health-conscious ambitious millennial, Wolfe is the perfect poster child for creating the “first feminist dating app.” The impetus was that it always felt odd that she and her like-minded circle of female friends were kicking ass in all aspects of their career, but were also expected to resort to Jane Austen’s ways when it came to approaching men. In its first month, the app attracted 100,000 users. But dating was just the beginning for Bumble. Wolfe wants to level the playing field on connections for everyone, in every aspect. Bumble was quickly followed by BumbleBFF, giving women a chance to find their next female bestie, which can be often as hard as finding a romantic partner. Now the company is moving into professional connections with BumbleBizz, to launch this holiday season.

“The current landscape has kicked off a toxic dynamic between men and women. The way we are expected to connect across the board is that the man is still always the aggressor and women are always meant to be more submissive. What we’re trying to do is take baby steps to change that,” Wolfe told the Observer. Essentially, she would like Bumble to be Facebook for people you don’t know. “You don’t know a lot of people, a lot of work connections, a lot of potential dates. We want to give people access to other people. It’s like the hyper-local version of LinkedIn, but with really clear connections versus missed opportunities,” she said adding that BumbleBizz will have in-person meet ups.

Similar to Bumble and BumbleBFF, women will make the first move on BumbleBizz, which has gotten some backlash, but Wolfe insists this benefits men, too. “By making it better for women you are making it better for everyone. It’s just equalizing the way women and men treat each other. I know in the business world some women won’t speak if there are men in meetings for fear of being seen as too assertive. This changes the dynamic,” she says. She also notes that this draws a clear line between networking and dating, as she has seen LinkedIn become another virtual pickup joint for men more. “It’s a way to really make it a respectful boundary.”

We may have ordered soup and a salad for lunch, but what we really wanted was a cheeseburger, French fries, a milk shake, chips and queso, and pizza as an afternoon snack.

It is likely that BumbleBizz will be a hit, considering its smart marketing and fun subway ads—you may have noticed the ones splashed across the Bedford stop last month—and a hilarious Instagram account which is a hybrid of confidence boasting assertions and adorable self deprecation. “We want to be a real app for real people and that’s pretty much the strategy. We want to show flaws because no one’s perfect. I’m 27 and I have no idea what I am doing half the time. I am just trying the best I can and I think that speaks to a lot of other women out there,” she said. Bumble’s ideal consumer is “the woman who wants something better or feels stuck in a rut and is ready to go create a goal.” The app’s latest upgrades also go right along with that concept; for $10 per month, users can now reconnect with previous matches, extend the 24-hour time limit on matches, and get new matches without swiping because they are “busy bees” (ambition can be quite time consuming, after all).

Though her company is rapidly expanding, the recently engaged Wolfe, who rises every day at 4 a.m., says she plans on keeping her headquarters in Austin, away from the “Silicon Valley Joneses,” as she likes being a bit out of the loop. “I’m kind of in my own world. We don’t get distracted by what a tech company is doing tomorrow night. We just worry about becoming a better company for our users and employees.” And it looks like her company is getting plenty of buzz, anyway. 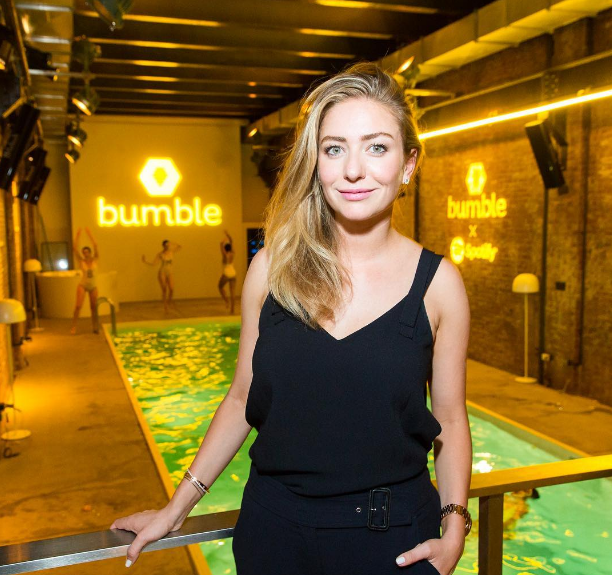