Nearly ten years after North Korea launched its first nuclear test, the country conducted its fifth such provocative blast last month, bragging they could now mount a warhead onto a rocket, with more than ten times the power in terms of kilotons. Successful missile tests last week apparently demonstrate that North Korea’s nuclear program is moving forward. But does this spell trouble for the United States? At a recent conference at the Col. Richard R. Hallock Lecture Series in Columbus, Georgia, not far from Ft. Benning, several U.S. experts on North Korea weighed in on the rogue state’s chances of striking American territory, and discussed how to deal with this increasing threat.

Mark Tokola, the vice-president of the Korean Economic Institute of America and a former senior Foreign Service officer, noted that while the North Koreans may be unable at this time to hit the United States with a nuclear weapon, they could strike Guam, South Korea or Japan, something confirmed by the Washington Post.

“North Korea saw what happened to Saddam and Khadafy when they didn’t have nukes.”

“Let’s not forget their conventional weapons,” Tokola reminded the near-capacity audience, noting that South Korea’s capital Seoul is only roughly 30 miles from the demilitarized zone. “They could inflict huge casualties on their opponents before losing,” the Korean expert warned.

So what is North Korea hoping to accomplish, members of the audience questioned. It’s a combination of domestic prestige, a guarantee against invasion by South Korea or the United States, and gaining a tactical advantage from threats to use nukes. Getting rid of such weapons of mass destruction, getting the country to “give up” their nukes is probably a “lost cause” said National Intelligence Director James Clapper at a meeting of the Council on Foreign Relations in New York.

“North Korea saw what happened to Saddam and Khadafy when they didn’t have nukes, as well as how Russia invaded Ukraine after Ukraine gave up their weapons,” Tokola told his audience of military personnel, politicians and a few students.

As for North Korea’s leader, Tokola contended “Kim Jong-un rewards allies and kills rivals. Some of the executions have involved family members. More refugees and defectors are fleeing the country.” Many of those killed are military leaders. New members of his inner circle tend to be younger, and blood relatives, as family lineage is key in this peculiar totalitarian state, according to the JoongAng Ilbo’s Unification Research Institute.

Tokola offered a list of options for countering North Korea’s saber-rattling, including doing nothing, “strategic patience,” allowing China to take over North Korea, attacking North Korea, engaging the international community in a peace process, pushing for reunification, “deter and contain,” and engage and negotiate, all having pros and cons to their use. Many of these are documented by Walter C. Clemens Jr. in his book, North Korea and the World: Human Rights, Arms Control, and Strategies for Negotiation.

Surprisingly, the policies being proposed by Donald Trump and Hillary Clinton may not be so apart, as representatives from the GOP and Democratic camp agreed with each other, Tokola observed. Plans include increasing sanctions, reinforce South Korean lines, and waiting for North Korea to collapse, as well as “looking for ways to speed that up.”

As far as tightening sanctions, closing so many loopholes in sanctions (such as those allowing North Korea airlines to refuel in foreign airports, or dodge some sanctions in China under the “livelihood clause”) was an idea that would increase the pressure on the North Korean communist regime.

But reunification will not be without challenge, acknowledged Tokola. “Unification may be easy but integration is hard,” he stated. Between West and East Germany, there was a high 4:1 ratio in GDP per capita income. In the South Korea-North Korea divide, that ratio jumps to an astounding 40:1. 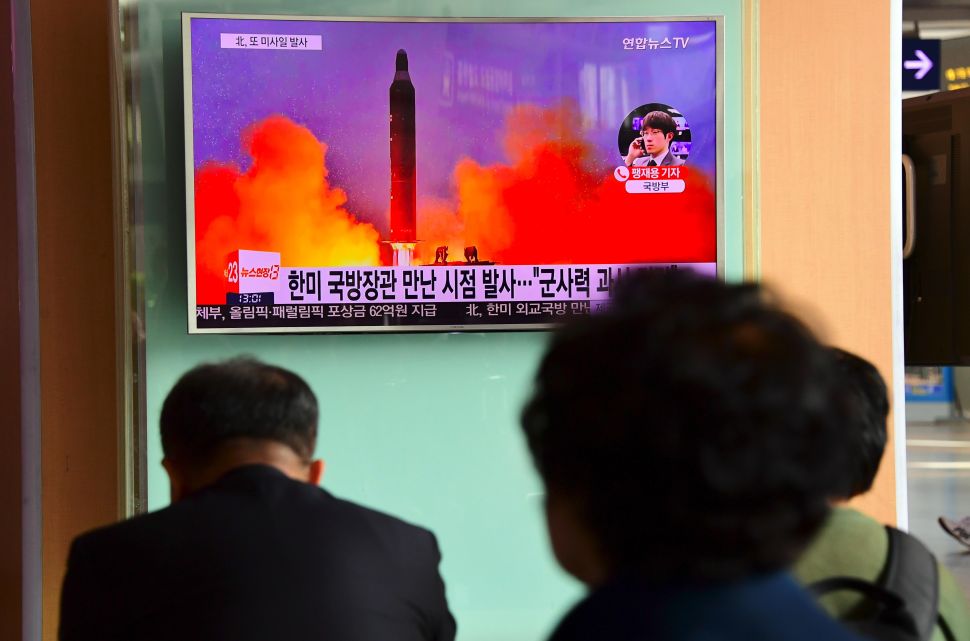