Politifact’s Lauren Carroll recently surpassed Glenn Kessler of The Washington Post for the worst fact-checking article of this election.

After the second presidential debate, Kessler rated the claim Bill Clinton signed NAFTA false. “Nope, the North American Free Trade Agreement was negotiated and signed by President George H.W. Bush, a Republican, though Bill Clinton was an avid supporter and got congressional approval,” Kessler wrote. Bill Clinton did sign NAFTA in 1993 after Congress approved it. The trade agreement was a divisive issue among Democrats at the time, who split on their vote for and against the agreement. Kessler’s argument would be the equivalent of providing Hillary Clinton with immunity from blame for signing the Trans-Pacific Partnership agreement if she comes into office, because President Obama has already signed the negotiated deal. Bill Clinton had the power to renegotiate or abandon NAFTA. He didn’t, and he shouldn’t be exempt from being held accountable for its consequences because of a partisan reading of history.

Both Bush & Clinton signed NAFTA. But because that's politically inconvenient, @GlennKesslerWP has to pretend this didn't happen. Unreal. https://t.co/h4kGfKWTHw

But Politifact’s fact-check of the WikiLeaks emails was much worse than Kessler’s. She doesn’t actually say whether the emails are true or false, but Carroll provides Democratic partisan commentary to defend claims that they are the latter. Every “expert” Carroll cites either didn’t read any of the leaked emails, or in their speculation don’t refer specifically to the WikiLeaks releases.

Sen. Tim Kaine’s claim the emails are doctored is first cited by Politifact, in which Kaine cites a July 2015 email from political consultant Erick Mullen who wrote that someone named Bob Glennon “won’t stop assuring” two Democratic Senators that Hillary Clinton promised the vice presidential slot to Kaine. Carroll cites a hacker, Robert Graham, who has authenticated the email.

Carroll claims that some documents released by Guccifer 2.0 were inauthentic, but the only example she provides is the existence of a “pay-to-play” folder from an alleged Clinton Foundation hack. This reveals Carroll didn’t do any sort of due diligence for if she had bothered to look at the Guccifer 2.0 documents, she would see that “Pay-to-play” folder is an opposition research folder on Republicans alleged pay-to-play schemes, though this folder has been frequently cited as evidence the hack was fabricated, along with the files being from the Democratic Congressional Campaign Committee (DCCC) and Virginia Democratic Party. The Clinton Foundation’s director of media relations denied the documents came from their servers, but Guccifer 2.0 later released Clinton Foundation documents, and the the media director did not return a comment over the legitimacy of those files.

A VICE Motherboard article mentioned as one of Carroll’s sources is filled with sweeping claims and generalizations, and little to no evidence to support several of the claims made in it. The author, Thomas Rid, recently claimed former Sputnik editor and Georgetown graduate Bill Moran “likely deliberately” misquoted a WikiLeaks email and published it in an article. He has also claimed The Intercept has a “cozy Russian intel relationship” and has put out warnings to journalists who report on WikiLeaks content. Though Rid focuses mostly on the Russian links to the hacks, he makes the same vague allegations that the content is fabricated. The only evidence he provides for these claims is one Twitter screenshot from someone else.

In August, Politico reported top Democrats held a conference call discussing the damage control tactic of claiming future releases would include fabricated content. Democrats and Clinton partisans have repeated this argument to divert attention away from the leaks, in addition to claims of Russian interference, or arguing that the revelations are benign or business as usual. Whatever works. Clinton staff have even used WikiLeaks to divert attention away from criticisms that have nothing to do with WikiLeaks.

The CEO of cybersecurity firm Taia Global is quoted in Politifact’s article. He doesn’t refer to the WikiLeaks emails, but says “I’ve looked at a lot of document dumps provided by hacker groups over the years, and in almost every case you can find a few altered or entirely falsified documents, But only a few. The vast majority were genuine. I believe that’s the case with the Podesta emails, as well.” Jamie Winterton, director of strategy for Arizona State University’s Global Security Initiative provided a similarly coy quote. None of the experts cited throughout Politifact’s article have read any of the WikiLeaks emails, and are quoted without referencing any evidence in the emails to corroborate their claims.

On Twitter, Carroll defended not citing a single email as evidence fabricated content is included in the Wikileaks releases. “Where do we even start out of 25k?” she asked. “We” can start by actually reading them, which the author of this Politifact factcheck didn’t do. Not a single WikiLeaks email release has been proven to be inauthentic, with many of the most damaging ones corroborated by responses from Hillary Clinton and the others implicated. 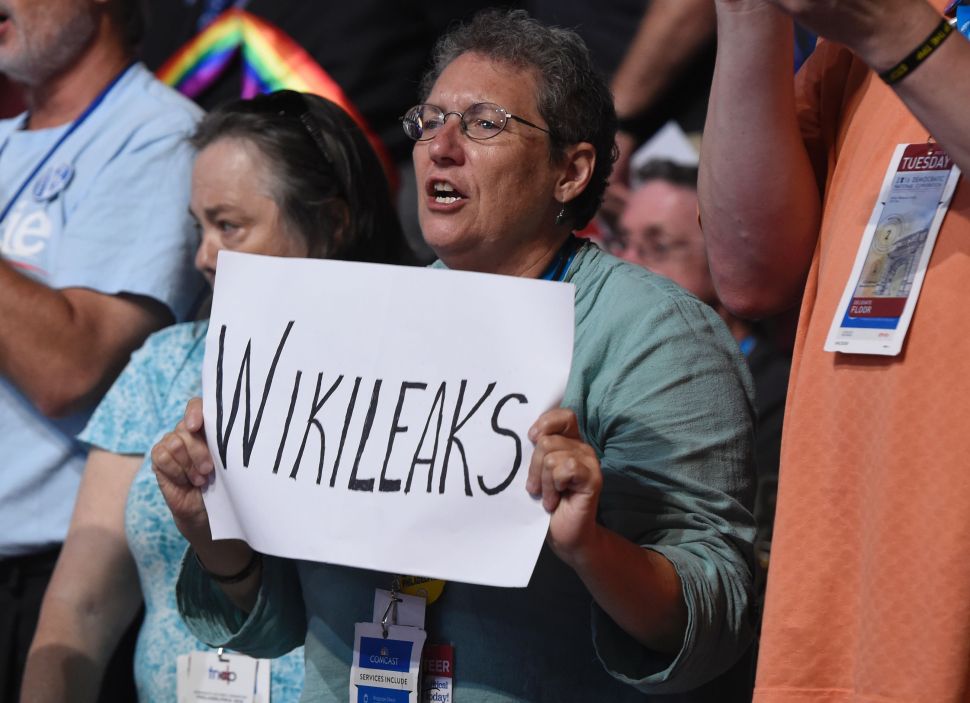