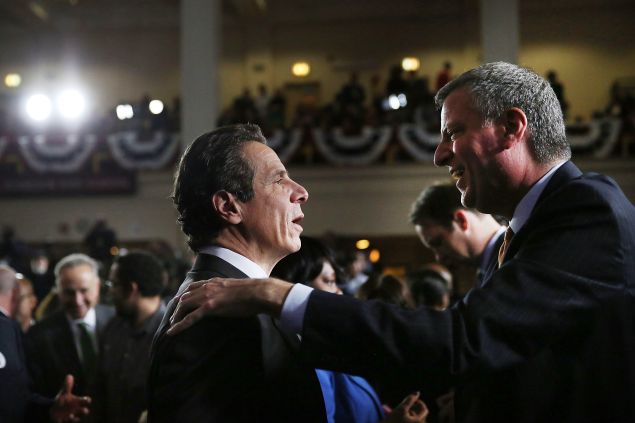 A surrogate for Hillary Clinton announced today that, if elected, the Democratic nominee would work to channel federal dollars for infrastructure rehabilitation directly to city governments—circumventing state capitals like Albany.

Acting as an ambassador for the Clinton campaign to the U.S. Conference of Mayors panel this afternoon, Pennsylvania Gov. Edward Rendell said the former secretary of state and senator from New York was interested in finding ways to get money directly to urban areas, without intermediaries. He was responding in particular to complaints from New Orleans Mayor Mitch Landrieu, who argued governors often divert federal dollars for public goods away from cities in order to appease voters and political allies in other parts of their state.

“Even with a good governor, it’s a challenge, because you know you get pulled on by folks that don’t necessarily live in the cities. And even if money does come, through the states, generally you have to peel a third, a half of it, off to make sure that the rest of your agenda as governor gets implemented,” Landrieu, himself the former lieutenant governor of Louisiana, said. “I think that mayors are aware of that, know that, feel really strongly I’m sure that the funding gets directly to the cities.

Rendell, who served as mayor of Philadelphia before becoming governor, said both he and Clinton agreed.

“There’s no doubt you’re right,” Rendell told Landrieu. “It’s part of her agenda. She’s looking for ways to do this.”

The Clinton surrogate suggested that the best way to get federal assistance directly to city coffers and city infrastructure would be to specifically designate funds for urban areas based on the proportion of residents who live there.

“The easiest way to do it would be just to have a set-aside, a set-aside for if the cities in State X are 38 percent of the population, have a 38 percent set-aside,” Rendell said. “That would be certainly the preferred option: because there it’s clean, it’s crisp, the governor just ignores it, it goes directly to the cities, and the governor gets control over everything else.”

But the former governor called the likelihood of getting such a measure through a Republican-dominated Congress, where many lawmakers hail from rural and suburban areas, would be “remote.”

“She’d be willing to take a shot at that, with the help of the mayors,” Rendell said.

Rendell also suggested working through non-governmental organizations, though he described them as “brutal” during his stint as mayor in the 1990s.

“Urban concerns were secondary or tertiary, or weren’t on the radar screen. They weren’t even secondary,” he said.

The office of Gov. Andrew Cuomo—who endorsed Clinton well ahead of de Blasio—did not immediately respond to requests for comment.