Melissa Mark-Viverito likes to walk around El Barrio, the portion of Harlem she represents in the City Council. When she does, her constituents like to stop her.

“Good morning,” one woman tells her, on the day of the first presidential debate. “I’m praying for tonight.”

Council speaker is a pretty local gig, but Mark-Viverito has made a bit of a name for herself nationally, and has been doing the cable news circuit as a surrogate for Democratic presidential candidate Hillary Clinton.

It was one of a slew of interactions Mark-Viverito had with her constituents during a walk with the Observer in East Harlem. There was the man who asked her in Spanish when she’d run for governor of Puerto Rico. Another told her she looks better in person than on television.

Mark-Viverito appreciates the ‘sense of pride’ people feel when they talk to her: ‘Oh, thank you so much for fighting for us and for giving us a voice.’

Mark-Viverito appreciates the “sense of pride” people feel when they talk to her: “Oh, thank you so much for fighting for us and for giving us a voice.”

Born in Puerto Rico and a resident of El Barrio for about 20 years, Mark-Viverito is almost three years into presiding over a Council grappling with how to balance the need for more housing with the fear that any market-rate development will more quickly push working-class people, often of color, out of newly desirable neighborhoods.

Her own district offers a window into that struggle. A massive city-block-sized parcel of city-owned land is slated to become housing—exactly what mix of affordable and market will be hotly debated. She walks through one of the few infill projects—housing built on land owned by the public housing authority—that has managed to get finished in the city.

“It’s a challenge. In every community you have to navigate the local dynamics that exist,” she said. “There have been times here when I’ve had to push back, the community has not wanted a rezoning and I’ve had to make the case, and I’ve won it even though the community resisted.”

Not far from the infill development is a project that’s one of Mark-Viverito’s favorites: Artspace PS109, a beautiful old public elementary school that’s now subsidized housing for artists, with work spaces. In addition to losing affordable housing, the city is losing affordable studio space—projects like this one help solve both problems. It was hard to get done, since the units are larger than what the city would normally subsidize. She’s shown it off to the mayor.

“I would love to see more of these projects in the city, and we haven’t been able to,” she said.

Around a corner, she points out a giant mural painted by an Argentinian artist. Just a block away or so is a better-known one, in political circles—“you know, the hex,” is how she describes it. It’s a mural of a chicken’s head, which her 2013 election opponent insisted Mark-Viverito had placed there as a Caribbean hex on her. After the story ran, Mark-Viverito jokingly started calling herself the bruja, or witch, of El Barrio.

At La Marqueta, an old open-air market underneath Metro North tracks, Mark-Viverito again touches on the tensions the neighborhood faces as it grows. The area has a space for live performance, and for years on Saturday afternoons there have been musical performances which newcomers are now complaining are too loud.

“To be honest, I don’t give them any credibility. People need to do the research into the community they’re moving into,” she said.

On 125th Street, an old firehouse was slated to be sold at auction—but Mark-Viverito sought to have it handed over for community use, and soon it will re-open as the new home for the Frank H. Williams Caribbean Cultural Center African Diaspora Institute. Mark-Viverito knocks on the door and asks for an impromptu tour through the half-finished gallery space.

“Now they’ll be able to have roots here,” she said. “They were down in Midtown somewhere, now they’re able to come back to the community.”

Back downtown, at City Hall, the race to replace Mark-Viverito, who is term-limited, is already starting to get underway. She’s been coy about what comes next. A run for governor of Puerto Rico, as her constituent suggested? Maybe some time in Washington, D.C.?

“I’m keeping things open, having conversations. Any ideas people have, I don’t know,” she said and laughed. “I’ll do a participatory process for that—what should Melissa do next?” 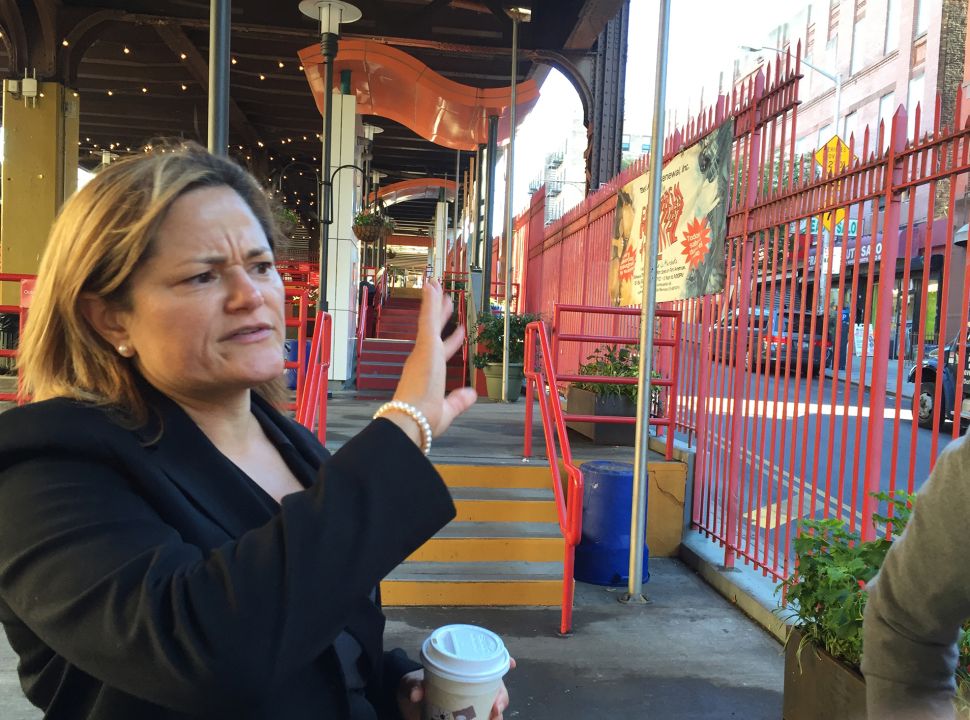