Mayor Bill de Blasio said he’s campaigning for Democratic presidential nominee Hillary Clinton this weekend in Michigan to make sure New York City is a priority for the next president—and he’s using his personal time to do it.

De Blasio will be campaigning for Clinton in Detroit on Sunday and will headline the Oakland County Democratic Party’s 56th annual Phil Hart Dinner Sunday night, the Detroit News reported. The mayor, who said First Lady Chirlane McCray will be traveling with him, said the Clinton campaign asked him to go to certain battleground states.

“The time that I’m putting into that, my own time, I think is some of the time that’s gonna be best spent in the next few weeks because if it helps us change the trajectory of the country and the federal government, that’s gonna help New York City in a very big and very material way,” he said, citing the city’s atrophied infrastructure as just one concern crying out for dollars from Washington. “We have so many infrastructure needs that we could act on if we had federal support. We obviously also need other big changes that can only happen at all.”

De Blasio previously campaigned in Wisconsin, while McCray campaigned separately in Ohio. Michigan’s voter registration deadline is Oct. 11. Clinton has an 11-point lead over Trump in Michigan, according to a recent EPIC-MRA poll for the Detroit Free Press and WXYZ.

He insists the trip will certainly help him ensure that New York City’s pressing needs are addressed. He argued that President Barack Obama “tried very hard on so many fronts” but the Congress was “blocking him at every turn”—he even called the passage of the Affordable Care Act a miracle.

The mayor gave comprehensive immigration reform as an example, which he said is a fundamental issue for New Yorkers given that the city has half a million undocumented immigrants, saying the reform “would do arguably more for New York City than any city in the country.”

“I think Hillary Clinton is the person who could actually achieve that,” de Blasio said.

The mayor has taken considerable flak for his frequent travels outside of New York City. Earlier this year, he and his wife knocked on doors in Iowa to campaign on behalf of Clinton, even though the candidate would not make time to meet with him nor let him deliver a speech as a surrogate. He was also criticized for traveling there and giving speeches there earlier last year. Some speculated de Blasio was looking to compensate for his belated endorsement of the Democratic nominee, whose 2000 bid for the Senate he briefly helmed and who attended his inauguration in 2014.

De Blasio had hoped to boost his national profile by having his group, the Progressive Agenda, host a presidential forum in the Hawkeye State—an idea he had to scrap after no candidates expressed interest in attending.

In August, the mayor faced skepticism when he went on his second vacation in a little more than a month for family engagements in New England. (In July, he and McCray traveled to Italy for a family vacation for a week—a country he has visited each summer since taking office.)

But mayor argued his appearance could make the difference for Clinton in key Midwestern states.

“When the people come in from out of state who have something to say about that and help focus people on the importance of voting and why it’s gonna make a difference in their lives, it’s helpful,” de Blasio said. “It’s kind of a pretty historic approach that’s been proven to be helpful to bring in outside surrogates who can get a point across and particularly in this case, motivate people to vote.”

But he did say that the city is watching the Hurricane Matthew storm which has been blamed for the deaths of 100 people in Haiti and has approached Florida—and that he would consider postponing his trip in the event due to the storm.

“We’re watching that storm very closely and that’s gonna dictate my decision about any travel on this,” he said.

Although de Blasio said he did “appreciate” the Observer’s question about the trip, he snapped at other reporters who asked standard run-of-the-mill questions at the unrelated press conference providing an update on the city’s rent freeze program. 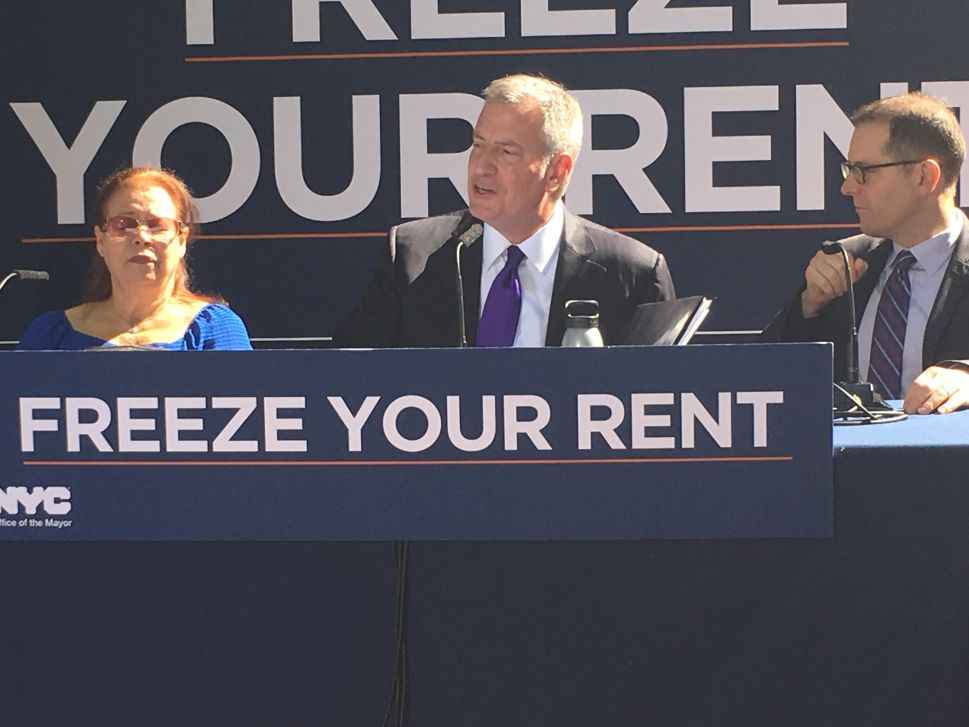