When US Supreme Court Justice Ruth Bader Ginsburg criticized San Francisco 49ers quarterback, Colin Kaepernick for protesting the treatment of African Americans by taking a knee instead of standing for the “Star-Spangled Banner,” some people questioned her “progressive reform” label.

While Ginsburg has since backpedaled on her comment that she thought Kaepernick’s protest was, “dumb and disrespectful,” she did not retract it. She just said that she should have declined to comment.

Refusing to stand for the national anthem has become a national trend, with everyone from high school football players to NFL stars using the “Star-Spangled Banner” as a means to protest the treatment of African Americans in this country. While individuals who refuse to honor the anthem are exercising their First Amendment rights under the Constitution, they are technically violating a federal law.

Justice Ginsburg should have withheld her comments because the day may come that she is asked to review the constitutionality of this federal law. In order for a case to be brought, however, there must be an injury. The law itself does not provide a penalty. So whether the Justice will ever be called upon to express her opinion on this topic in writing as a member of the U. S. Supreme Court remains a remote possibility.

History of the Star-Spangled Banner

Francis Scott Key penned the “Star-Spangled Banner” during the War of 1812. From a ship in Baltimore’s harbor, Key watched the U.S. military defend Fort McHenry against a relentless British attack. Struck by the sight of the American flag still flying after the heavy bombardment, he began to write what would become our national anthem.

Once on shore, Key finished the song, which he called “Defence of Fort McHenry,” and sent it to a Baltimore printer. An estimated 1000 broadsides were printed and distributed to the U.S. soldiers who had defended Fort McHenry. Two Baltimore newspapers also published the song, and within a month, it had been published in at least seventeen other newspapers across the country.

Over the years, the “Star-Spangled Banner” grew in popularity. While it was certainly the U.S. military’s de factor national anthem, it did not become official for more than 100 years. In 1916, President Woodrow Wilson signed an executive order formally declaring the “Star-Spangled Banner” as our national anthem. In 1931, Congress passed an act confirming the designation, and President Hoover signed it into law.

Many Americans are unaware that the national anthem is governed by federal law. Pursuant to 36 U.S. Code § 301, certain conduct is required during any public rendition of the “Star-Spangled Banner.”

When the flag is displayed, individuals in uniform “should give the military salute at the first note of the anthem and maintain that position until the last note.” Meanwhile, members of the Armed Forces and veterans who are present, but not in uniform, may also salute the flag.

Under the law, everyone else present “should face the flag and stand at attention with their right hand over the heart, and men not in uniform, if applicable, should remove their headdress with their right hand and hold it at the left shoulder, the hand being over the heart.” When the flag is not displayed, the law dictates that everyone face toward the music and act in the same manner they would if the flag were displayed.

Anyone who has attended a sporting event can attest that not everyone follows the protocol detailed in the federal code, and no one gets in trouble. That’s because the law does not impose any penalties for violating it. In fact, doing so would likely violate the First Amendment.

In the landmark case of West Virginia State Board of Education v. Barnette, the U.S. Supreme Court held that Jehovah’s Witnesses can’t be required to recite the Pledge of Allegiance. “To believe that patriotism will not flourish if patriotic ceremonies are voluntary and spontaneous instead of a compulsory routine is to make an unflattering estimate of the appeal of our institutions to free minds,” Justice Jackson Robert Jackson wrote. “If there is any fixed star in our constitutional constellation, it is that no official, high or petty, can prescribe what shall be orthodox in politics, nationalism, religion, or other matters of opinion or force citizens to confess by word or act their faith therein.” 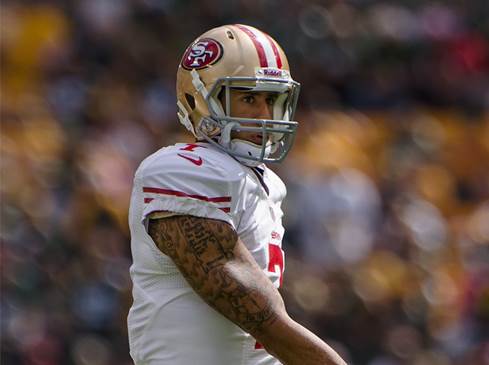