Amy Winehouse’s final album, Back to Black turns 10 today, and the tributes are rolling in.

The Atlantic went first with this poetic homage, concluding that “the power that lies in hearing Back to Black is in the totality of its acceptance.” Huffington Post UK came out with this obligatory “10 Things You Didn’t Know” listicle, focusing largely on numbers and sales. This Fader piece comes closest to looking at the underlying humanity, pain and loss that Winehouse was grappling with, expressing that “It’s difficult to remember what happened to Winehouse in plain view of us all, how consumption of her explicit pains makes us complicit in her death” while also glamorizing her life.

But whether such glamorization will erase all the nasty, horrible jokes about her mental health that the tabloids regularly printed as she spiraled closer and closer toward death is quite irrelevant, and still a disservice to her memory.

We can learn the most about Winehouse’s psyche not by celebrating her work of pain and heartbreak as visionary—though it may well have been—but by taking a long hard look at how the people around her were so eager to enable that success that they inadvertently enabled her self-destructive behavior as well.

“Now Amy Winehouse is dead, like many others whose unnecessary deaths have been retrospectively romanticised, at 27 years old,” wrote her friend Russell Brand. “Whether this tragedy was preventable or not is now irrelevant. It is not preventable today. We have lost a beautiful and talented woman to this disease. Not all addicts have Amy’s incredible talent. Or Kurt’s or Jimi’s or Janis’s, some people just get the affliction. All we can do is adapt the way we view this condition, not as a crime or a romantic affectation but as a disease that will kill.”

Brand’s evoking the “27 Club” here, a morbid list of artists who all died too young. Why do we romanticize young death? Even Neil Young’s classic and profound words, “It’s better to burn out than fade away” are tantamount to fetishization. Meanwhile the origins of the adage “live fast, die young, leave a pretty corpse,” attributed to everyone from Dr. Gonzo to James Dean, go back further than most realize. What barbaric element of our selves finds such fascination with youthful self-destruction?

This story you’re reading was originally intended to be an examination of Winehouse’s place among the “27 Club,” whose members also include Janis Joplin, Kurt Cobain, Basquiat, Jim Morrison, The Grateful Dead’s Pigpen, The Rolling Stone’s Brian Jones, and so on. But whether or not Winehouse’s genius is now elevated by her tumultuous life now seems a moot point.

There are patterns in the life of someone hell-bent on self-destruction, psychological factors informing the disease of addiction. Russell Brand says that no one could have prevented Winehouse’s death, which is to say she would have found a way because, by that point in the sudden ascension of celebrity for which she felt considerably untrained, she just wanted a way out. The uncomfortably raw, voyeuristic posthumous documentary Amy definitely suggests this is the case. And therein might lie an important lesson.

Ever since her parents split up, Winehouse’s mother accepted her independent spirit as part of her personality. It was difficult to stand up to her daughter, she says in Amy. When she was younger, her brazen character proved empowering, even if there was no arguing with her. “She could make you feel so important, and then unimportant,” said her old manager Nick Shymansky. “That was what she loved to do, put people in an uncomfortable position and shock them.” He called her a force of nature.

How do you talk to someone that brazen from a place of concern? Many of us have tried, and it’s seemingly impossible. That sense of independence seemed to be an asset to Winehouse’s success, until it wasn’t. Maybe it was the broken home, but the precedent was set early on that Winehouse was a young woman who got what she wanted. She was already taking the anti-depressant Seroxat at the age of 14.

Her 2003 album Frank was already crying out Freudian fates and a destructive side a mile wide, but all of this came to a head when she moved to the hipster enclave of Camden, in North London. There she fell in with a guy named Blake Fielder-Civil who handed out fliers at a local club called Trash, embarking with him on a Sid & Nancy level of us against the world cheating, boozing and general debauch. When the Libertines’ Pete Dougherty is among your party friends, logic would suggest you’re simply not in good company.

“Heroin was everywhere in Camden: little blue bags the size of, I suppose, two peas,” recounted Russell Brand in his autobiography. “That’s how big a £10 bag is—half the size of a Malteser, twice the size of a pea. Just in case you ever become a junkie and you need to score in North London, you can take this article with you as a guide to weights and measures. ‘That’s not £10 worth, you scumbag. Look at this Malteser.’ Possibly that’ll be the last sentence you utter before being flung into a canal.”

This was the point in her career when the heavy use started. Heroin, crack, you name it, and none of them mixed well with drinking.

She went to rehab for a stint, but it was treated more as a timed formality than a thorough, quality trip because the label wanted her to start recording her next record. And when Shymansky says that the record should have waited, that if its recording had been delayed until Winehouse had time to substantively get clean she might still be around, you can’t help but break.

Her relationship with this Fielder-Civil was a mess, too, an endless series of breaking up and getting back together. She stopped eating when they broke up, and would be reminded of him when she walked the halls of her place to see her own blood staining the walls from where she punched them in anger.

It’s clear in hindsight she was in no position to make a record, but the remorse should have been crystalized long before hindsight. Her label said that if she didn’t make another record right then, she would be forgotten.

That record became Back to Black, which throbs and aches even more intensely now.

She references the soul singer Donny Hathaway in “Rehab”, which became a celebrated hit, no doubt contributing to the glamorization of her self-destruction. Even the lyrics that don’t seem to be about partying distinctly are—when Winehouse sings, “together again, Jamaica and Spain,” she’s talking about smoking and drinking. “He Can Only Hold her” is so transparent in communicating that she’s nothing but a body, that her soul has left, forcing one to wonder why no one close to her interpreted its lyrics as an ultimate cry for help.

That her grandmother died while she recorded Back to Black was a bigger blow than Fielder-Civil’s influence or her depression still—her grandmother was one of the few people in her life who told it like it was.

When she OD’d at one point, the doctor told her family she would die if she had another seizure. “With the amount of cocaine, crack, heroin and alcohol in her system, it’s a miracle she’s not in a coma,” he reportedly said. “You got lucky this time, she’s a petite girl.” Fielder-Civil was sneaking her those little heroin baggies during her stint.

So she went back to rehab, betraying the prophecy of her biggest hit, and the record label just called it “exhaustion” as record labels long have. In one of the documentary’s many moments so personal and invasive that they should have never been filmed in the first place, Fielder-Civil mocks her, surrounded by loved ones, suggesting she’s going to need to change the lyrics to “Rehab”. The most fucked up thing is, no one tells him to stop.

Her childhood friend remembers being so proud for Winehouse after she won a Grammy for Back to Black, but the feeling soon shifted after Winehouse pulled her onstage and took her into the wings. “‘Jules, this is so boring without drugs,’ ” she said.

It was alcohol poisoning that ultimately killed her, a surrender of the body’s systems no doubt exacerbated by her anorexia, bulimia and other drug use.

Whether or not Winehouse wanted to die at this point is no one’s place to say. The paparazzi were following her everywhere, enticed by the glamour of self-destruction they themselves were perpetuating with their invasiveness. Before he re-named himself Yasiin Bey, Mos Def remembered an incident where Winehouse showed up at his place unannounced with a bag of opium. “This is someone who’s trying to disappear,” he thought at the time.

Jules kept wanting Winehouse to ask for help, but sometimes, an addict just doesn’t know how. Her dad hated the film because it portrayed him poorly, but no editing or manipulative cut could have created the fact that the constant rolling camera was his decision. That’s where much of the discomfort watching Amy comes from—most good documentaries have a voyeuristic quality to them, but at what cost to the subject?

“When I first met her around Camden she was just some twit in a pink satin jacket shuffling round bars with mutual friends, most of whom were in cool Indie bands or peripheral Camden figures Withnail-ing their way through life on impotent charisma,” wrote Brand, evoking the cult classic Withnail and I that turns British squalor into pointed, theatrical satire.

Ultimately, that evaporation of charisma is why we must not romanticize Amy’s life, death, or her music. It’s why the death of my best friend, Stefano, taught me that there’s a harmful romantic myth surrounding the opioid-chic musician, and it’s being fed to us not only by street peddlers, but peddlers in lab coats and lobby groups, too.

To her family’s credit, they’ve since set up a foundation to combat the illness of addiction, focused on the kids. They’ve each also written memoirs about their late daughter, and the proceeds go to their foundation. Hindsight, man.

“Not all of us know someone with the incredible talent that Amy had but we all know drunks and junkies and they all need help and the help is out there,” concludes Brand in his eulogy. “All they have to do is pick up the phone and make the call. Or not. Either way, there will be a phone call.” 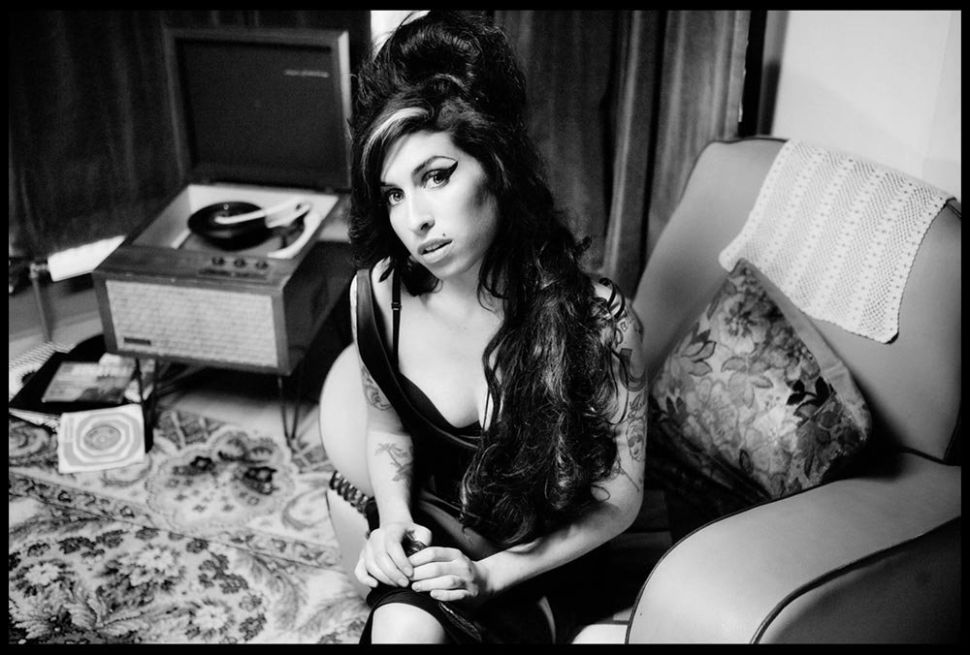