On Sunday night, SpaceX CEO Elon Musk participated in an Ask Me Anything on the /r/spacex subreddit to answer technical questions posed by hardcore enthusiasts on how the billionaire plans to make humanity a multiplanetary species.

The AMA was supplemental to Musk’s talk given at the 67th annual International Astronautical Congress held in Guadalajara, Mexico just a month ago where he unveiled the architecture for establishing a permanent human presence on Mars. Musk’s answers added detail and updates to his IAC talk originally titled Making Humans a Multiplanetary Species.

The highly anticipated AMA was upvoted over 6,300 times and received over 5,400 comments. And in fact, active members of the /r/spacex subreddit sat front row for Musk’s presentation at the Congress in Mexico.

SpaceX intends to initially build what they are referring to as the Interplanetary Transport System (formerly dubbed the Mars Colonial Transporter), a “Big Fucking Rocket” and a “Big Fucking Spaceship” that could safely carry a crew of up to 100 settlers to the red planet—a journey that could last up to 150 days.The rocket, which will be reusable, would stand 400 ft tall—the largest ever conceptualized—and the passenger ship that will travel across the solar system will be 55 ft wide and also reusable.

Musk explained during the AMA that they will probably change the name of the ITS. “I think we need a new name. ITS just isn’t working. I’m using BFR and BFS for the rocket and spaceship, which is fine internally, but…”

Regardless of what the massive spacecraft is eventually called, the first one will be named Heart of Gold—a reference to the first ship to utilize the Infinite Improbability Drive and stolen by President Beeblebrox in Hitchhiker’s Guide to the Galaxy. Earth-based President Barack Obama proclaimed just two weeks ago that America will reach Mars by the 2030’s and even issued an Interplanetary Directive to do so.

Musk’s presentation at IAC revealed that the Heart of Gold will be the first in a fleet of 1,000 ships that SpaceX will hopefully use to make 10,000 trips over the course of a century and populate Mars with a million people. A carrier (eventually multiple ships) would launch every 26 months when Mars and Earth’s orbit are in closest alignment. Musk said during the AMA that SpaceX will “try to double the number of flights with each Earth-Mars orbital rendezvous, which is every 26 months, until the city can grow by itself.”

While SpaceX is hoping to launch the maiden voyage within a decade, the mission will be rather different from what we’ve been fed by Hollywood and science fiction literature. For instance, Heart of Gold’s first mission will have no crew and be a purely industrial endeavour with the purpose of sending the necessary hardware to build a fuel processing facility on Mars. That’s right, Elon Musk, the man who is successfully waging a war against the fossil-fuel industry here on Earth with Tesla and Solarcity, will become Mars’ first energy tycoon.

Musk confirmed during the AMA that the Heart of Gold will fly to Mars “loaded only with equipment to build the propellant plant.” A Mars-based fueling facility is crucial to the entire architecture of building a city on Mars and especially ensuring return flights to Earth. Reusability is the key here and being able to refuel in space and on other worlds is key to pushing human presence even further out into the solar system to destinations like Jupiter and Saturn.

The first liftoff will be from Kennedy Space Center’s launch pad 39A and the event will be a culmination of the breakthroughs SpaceX has made over the last year in recovering their Falcon 9 boosters after contracted missions. SpaceX’s revenue comes from launching satellites for private companies as well as cargo missions to the International Space Station for NASA.

Musk revealed during the AMA that SpaceX will debut the fifth and final version of the Falcon 9 next year which he thinks “could be used almost indefinitely, so long as there is scheduled maintenance and careful inspections.”

After Heart of Gold is launched on its massive rocket over a decade from now (and from the same pad that launched the first humans to the moon) the spacecraft will stay in orbit as the rocket booster returns to pad 39A. After the booster is secured on the pad, a cable will lift a tanker spacecraft loaded with just fuel onto it for another launch. After liftoff, the tanker will fly to and dock with Heart of Gold to max out its propellant haul. SpaceX will likely have to repeat this process multiple times to fill the ship to capacity for the long trip and for possible emergencies.

The fuel that powers the Raptor engine is methane and the first mission will establish a processing plant to convert resources (including ) available on Mars into propellant. The second mission of the Interplanetary Transport System will have a skeleton crew and they will travel to our neighboring world to complete the construction of the facility, do some troubleshooting, and according to a response given by Musk during the AMA, build a “rudimentary base.”

“Probably just pack the pressurized space with cargo. Early missions will be heavily weighted towards cargo,” explained Musk. “First crewed mission would have about a dozen people, as the goal will be to build out and troubleshoot the propellant plant and Mars Base Alpha power system.”

That fuel will be burned by SpaceX’s still-in-development Raptor engines. The Interplanetary Transport System will have 42 of them on the booster rocket and 9 more on the passenger vehicle. SpaceX successfully tested the Raptor just a couple of nights before Musk gave his talk in Guadalajara. When asked by a redditor why 42, Musk replied “It had to be 42 for important scientific and fictional reasons!” referring once again to Hitchhiker’s Guide to the Galaxy.

Elon Musk explained that the development of the Raptor engines base material was difficult but SpaceX has made significant progress. “It used to be developing a new metal alloy that is extremely resistant to oxidation for the hot oxygen-rich turbopump, which is operating at insane pressure to feed a 300 bar main chamber,” Musk said when asked what the most difficult aspect of the ITS development has been so far. “Anything that can burn, will burn. We seem to have that under control, as the Raptor turbopump didn’t show erosion in the test firings, but there is still room for optimization.”

SpaceX has already built a prototype carbon-fiber tank that will hold the fuel for ITS and Musk showed it off in a slide during his presentation in Guadalajara. “That was built with latest and greatest carbon fiber prepreg,” he said on Reddit. “In theory, it should hold cryogenic propellant without leaking and without a sealing liner. Early tests are promising.” 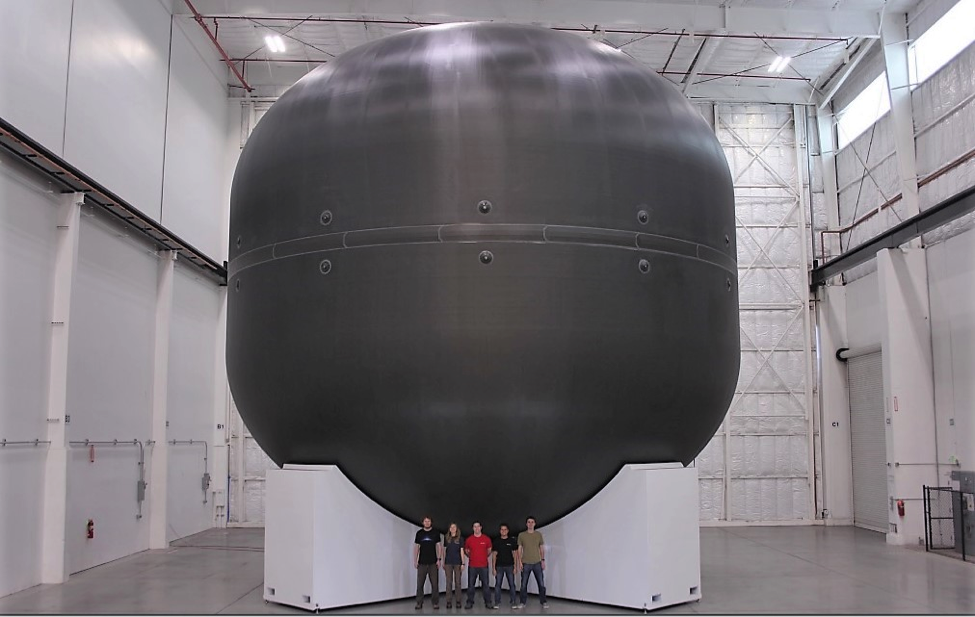 As for how humans will actually live on the spacecraft during the flight to Mars and what the living situation on the surface, Musk offered minute details on /r/spacex. “Will aim to release details of the habitation section when we have actual live mockups. Maybe in a year or two,” he said.

To establish a settlement once the first settlers reach the red planet, SpaceX intends to initially construct “glass panes with carbon fiber frames to build geodesic domes on the surface, plus a lot of miner/tunneling droids,” Musk described. “With the latter, you can build out a huge amount of pressurized space for industrial operations and leave the glass domes for green living space.”

So what can we take away from the Elon Musk’s AMA on reddit? SpaceX is serious about their long-term goal of making humanity a fully space-faring civilization. Hardware is already in development, the company is making headway in reusability and hopes to fly the first flight-proven rocket very soon.

SpaceX is gearing up for the launch of their upcoming Falcon Heavy rocket which will be used to establish a cargo route with Mars by launching the company’s Red Dragon cargo vehicle in 2018 to start getting some supplies to the surface as well as conducting the necessary surveys before the Heart of Gold arrives.