Historians will remember the autumn of 2016 as the season of both the “Scary Clown” fad and the frightening campaign of Donald Trump for President of the United States.

Amid a cascade of allegations in recent days of sexual predation by Trump, the flailing and failing Republican demagogue once again dominated the cable news channels with, among other things, a dog whistle of anti-Semitism, attacks against his own party’s leaders, a threatened libel lawsuit against The New York Times and continuing denials of sexual behavior that he also has bragged about.

As host Chris Matthews said on MSNBC’s Hardball Thursday night, “It’s got to be the first time that a public figure has served as the narrator of the story he’s denying.”

This was a reference to tapes made in 2005 (and revealed last Friday by The Washington Post) in which Trump bragged to a TV host—off-camera but on microphone—that he likes to kiss women without asking and “grab them by the pussy.”

It’s something he can do, Trump said, because he was a TV “star” on a “reality show” called The Apprentice.

Indeed, Trump remains a TV star but not in the way he planned. His political reality show has turned into real reality and the reality is that his poll numbers are plunging and his campaign is in a tailspin.

She spoke with more dignity and force in the early afternoon in New Hampshire.

“This is not normal,” she said of the ugly revelations about Trump, which were countered by Trump’s “scorched-earth” attack on Bill Clinton’s sexual behavior in the past.

“This is not politics as usual,” Mrs. Obama said. “This is disgraceful. It is intolerable. And it doesn’t matter what party you belong to . . . enough is enough.”

As the Twitter volleys and fiery speeches settled down in the late evening Thursday, Republican veteran and MSNBC commentator Nicolle Wallace told Brian Williams on The 11th Hour that “Michelle Obama delivered the final knockout blow to Trump’s candidacy . . . I’m heartened to see this as a tipping point.”

Wallace called the first lady’s address “the most perfect political speech I’ve seen in my career . . . She is speaking truth. It was moving. It was powerful.”

Other Trump eruptions were noticed by one network not known for favoring liberals or Clinton.

Only Trump can save the nation, Trump said.

His bellicose words echoed Europe in the 1930s and momentarily diverted attention from allegations from a growing number of  women about Trump’s alleged history of alleged sexual assault, like running his allegedly short fingers up a woman’s skirt in the first-class cabin of an airplane or allegedly walking in unannounced to check out the naked talent in the dressing rooms of the teenage beauty pageant.

He bragged about the latter on live radio with Howard Stern.

“Donald Trump continues to stab himself in the chest with his own libido,” Shapiro said.

In a major way, it was Kelly who defined Trump in the first Republican primary debate in 2015 by asking him an edgy, rhetorical question about his many insults of women over the years.

Trump later implied Kelly might have been deranged by her menstrual period.

“She had blood coming out of her wherever,” Trump said then.

Curiously, Kelly’s show Thursday carried no highlights of Michelle Obama’s speech. Neither did The O’Reilly Factor or Hannity, the two shows that bracket her in the prime-time hours of 8 p.m. to 11 p.m., Eastern time.

And when the speech took place in the early afternoon Thursday, both MSNBC and CNN carried it live. But not Fox, which showed, instead, an interview with Newt Gingrich (R-Fox), who ladled out the usual baloney sauce.

Equally shabby was Fox’s coverage Wednesday night, when the stories about Trump’s sexual aggression began to appear in The New York Times, People Magazine and other mainstream outlets.

They were told by angry women who had heard Trump deny in Sunday’s debate that he had ever accosted women against their will.

In three hours of prime-time programming Wednesday, while other networks covered the Trump scandal thoroughly, Fox filled only 10 minutes about it in the second half of Kelly’s show and less than a minute in a studio read during a break on Hannity.

But Fox devoted many minutes to “Breaking News” (Swoosh! Ding!) about those emails hacked by Russian thieves from Clinton’s aides that proved that the Clinton campaign hates Catholics, Everyone At Fox Said.

O’Reilly and Hannity, the Long Island bully boys who suck up to Trump and often are visited by him, avoided the subject entirely, perhaps because they record their stale shows early and go home before real news rears its ugly head.

But on Thursday night, Hannity made much time for three women who accused former President Bill Clinton of sexual misbehavior in the 1970s and 1980s which is—Fox and the Trump campaign insist—related to this campaign because Hillary Clinton attacked the accusers on behalf of her husband.

In some ways, it was nostalgic. These were the very same stories Hannity and Fox did to death two decades ago, when brand-new Fox began its successful, propagandistic pollution of the American political dialogue.

Perhaps channel surfers were lucky enough to watch a better interview on a better network Thursday when CNN’s Anderson Cooper spoke at length with Jessica Leeds, a 74-year-old woman with gray hair, a formal air, brown glasses and precise diction.

She said Trump groped her on a flight in 1979 and that she decided to write about it in a letter to The New York Times on Monday morning because Trump had denied groping women.

She was one of two women who contacted the newspaper of record, which published their stories online Wednesday night.

Cooper gently prodded her to tell him which sexual slur Trump directed at her when she encountered him by chance at a banquet two years after the airplane flight.

Although politely refusing to repeat the word, she was blunt about other things.

“His hands were everywhere,” she said of Trump. “He was grabbing my breasts, trying to turn me toward him and kissing me. That’s when his hands started going toward my knee and up my skirt and that’s when I said ‘I don’t need this’ and I got up.”

She moved immediately to the last row of the plane. Cooper asked her where Trump kissed her.

“Wherever he could find a landing spot,” Leeds said.

When Trump announced his candidacy last year, Leeds said she began to tell people about her encounter with Trump, her secret from decades before. She told mostly women, she said, and people in her book club.

They urged her to go public, she said, but she never got the will until Sunday’s debate when she heard Trump lie and deny what she knew to be true.

“It still infuriates me when I think about it,” she said to Cooper, who had pressed Trump to either confirm or deny his recorded sexual braggadocio.

“When you specifically asked Trump and he said ‘No’ I literally wanted to throw something at the TV or punch my hand in the TV,” Leeds continued.

She said she couldn’t sleep and got out of bed early to write a letter to the Times which she hoped to get it on the editorial page. She was surprised when reporters and video producers descended.

They and others got the message to people like Michelle Obama, who reacted in a quavering voice that barely contained her fury.

She said Trump’s own words and anecdotes about him from others gave her that “sick, sinking feeling” a woman gets when a strange man shouts a lewd remark at her from across the street.

She compared Trump’s recorded words to “that feeling of terror and violation” you get from the creepy guy at the office who stands a little too close to you and stares too long at your body.

“It is cruel. It is frightening. And the truth is, it hurts. It hurts . . . This is not something we can ignore . . . This was not just a lewd conversation. This wasn’t just locker-room banter. This was a powerful individual speaking freely and openly about sexually predatory behavior and actually bragging about kissing and groping women, using language so obscene . . . I can’t believe that I’m saying that a candidate for president of the United States has bragged about sexually assaulting women.”

On Fox—where her words were hardly heard—most shows kept pushing the notion that all these women might be part of a conspiracy to defame Trump just before the voting and that the more important story was the new Clinton staff stuff stolen by Russian hackers and leaked to Wikileaks and why didn’t the mainstream media cover that? Huh? Huh?

All this cynical misdirection was too much for Charles Lane of The Washington Post—a panel guest on Bret Baier’s Special Report in the 6 p.m. hour.

“The stuff about Donald Trump is so ugly, so really off-the-charts, brand-new ugly for a person running for this high office, this dignified office, that it’s bound to have more impact (than email gossip),” Lane said. “This is a new level.” 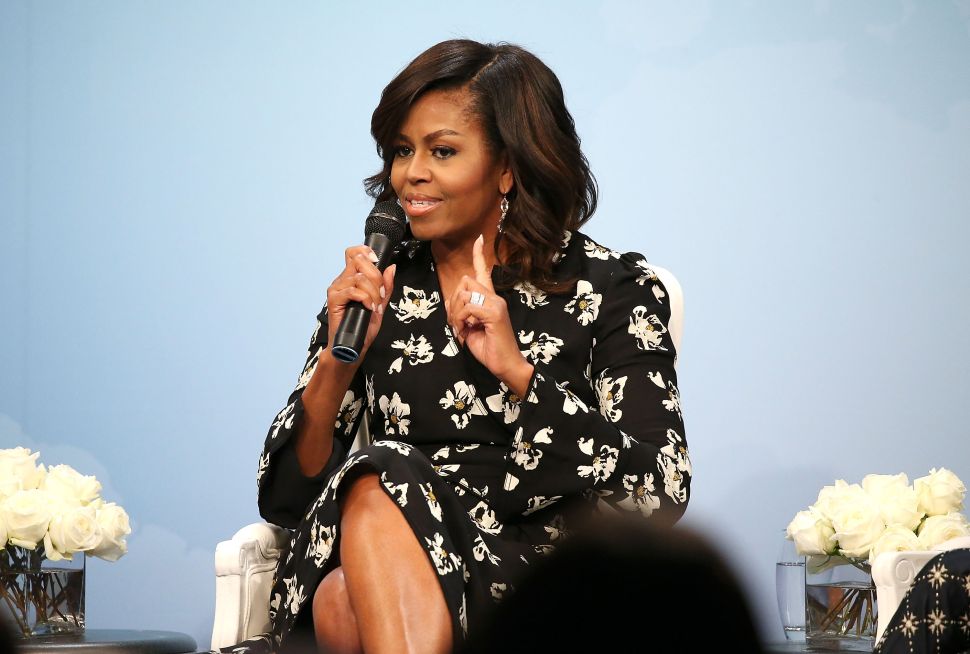