Former Police Commissioner Bill Bratton says he has no problem with presidential nominees Hillary Clinton and Donald Trump discussing the controversial policing practice of stop-and-frisk—but he’s asking them to “speak about it in an appropriate way” and stop “misinforming” the public.

During the first presidential debate last month, Donald Trump insisted that policy worked well in New York, in spite of objections from Hillary Clinton and moderator Lester Holt that a federal judge ruled it unconstitutional in 2013. But the two-time police commissioner of the Police Department questioned the assertion that stop-and-frisk is over and that it’s unconstitutional. He called it the “most basic tool of American policing” that he says is used by every police department in the country.

“When presidential candidates or moderators and news reporters and activists say that it’s unconstitutional, it’s a misrepresentation,” he continued.

Bratton says Judge Shira Scheindlin did not rule that the stop-and-frisk practice itself was unconstitutional, but just the “racially disproportionate” manner in which it was implemented.

“What happens here sets the stage that the cop out there trying to police and the first reaction, ‘Hey, you cannot bother me, you cannot stop me,'” Bratton said. “If the activity gives that officer reasonable, objective suspicion that you’re going to commit a crime…he or she has the right to stop you.”

Bratton noted stop-and-frisk was a key issue in the 2013 mayoral race in New York City and has become a hot-button issue in the current presidential race, but he just wants the discussion to paint an accurate picture.

“Again, it’s the idea of it makes the police officer’s life much more difficult when we’re either misinforming the public about the law, or misinterpreting the law. And I think [with] ‘stop-question-and-frisk,’ ‘reasonable suspicion stops,’ that’s a profound problem,” Bratton said while addressing reporters following his speech at the New York Law School in Lower Manhattan this morning.

He also dismissed Trump’s calls for the use of stop-and-frisk to be dialed up throughout the country. He cited Chicago as an example, noting that Chicago may need more reasonable suspicion stops “to deal with their problem than New York, which is having much less problems.”

“I don’t think that’s necessary at all,” Bratton said. “Again, it always has to be within the law. Every community is different.”

Bratton first led the NYPD in the 1990s under former Mayor Rudolph Giuliani, now an ardent Trump supporter, and received credit for bringing down the city’s crime rate with his now-controversial broken windows policing approach. He returned to the job almost two decades later under de Blasio, who has endorsed Clinton.

The police leader himself has repeatedly lashed out at Trump, and denied the Queens-born businessman’s request to meet with NYPD officers. Bratton has even mocked the trash-talking mogul as a man who has “never taken a punch in his life,” but who would endanger the United States if he became president.

Bratton stepped down in September to take a job with Teneo Holdings, a consulting firm with ties to the Clintons.

At the New York Law School, Bratton also defended broken windows, which calls for a focus on small, so-called “quality of life offenses” to prevent larger crimes—and wouldn’t even consider one attendee’s calls during the question-answer-session to do away with the practice. But he also said he sympathized with advocates who protest over police brutality concerns, saying that they have the right to protest even if he does not always agree. He also said he would support penalties for assaulting police officers and announced the title of his next book that will be coming out in a year: “Contagion of Fear.”

He also spoke about the evolution of policing over time starting from his days as a young police officer in the 1970s, noting his first days as a Boston Police Department cop: a “155-pound Bill Bratton in an all-black neighborhood.” And he touted the neighborhood policing approach embraced by de Blasio and Police Commissioner James O’Neill which he said people will be seeing more of in New York, also noting the drop in crime in New York City last month. 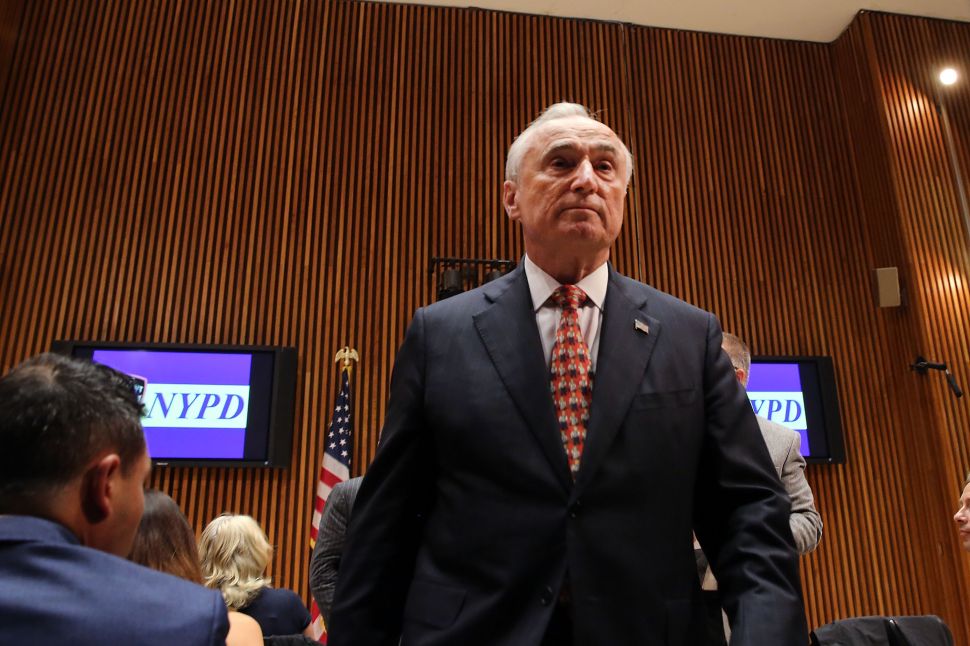