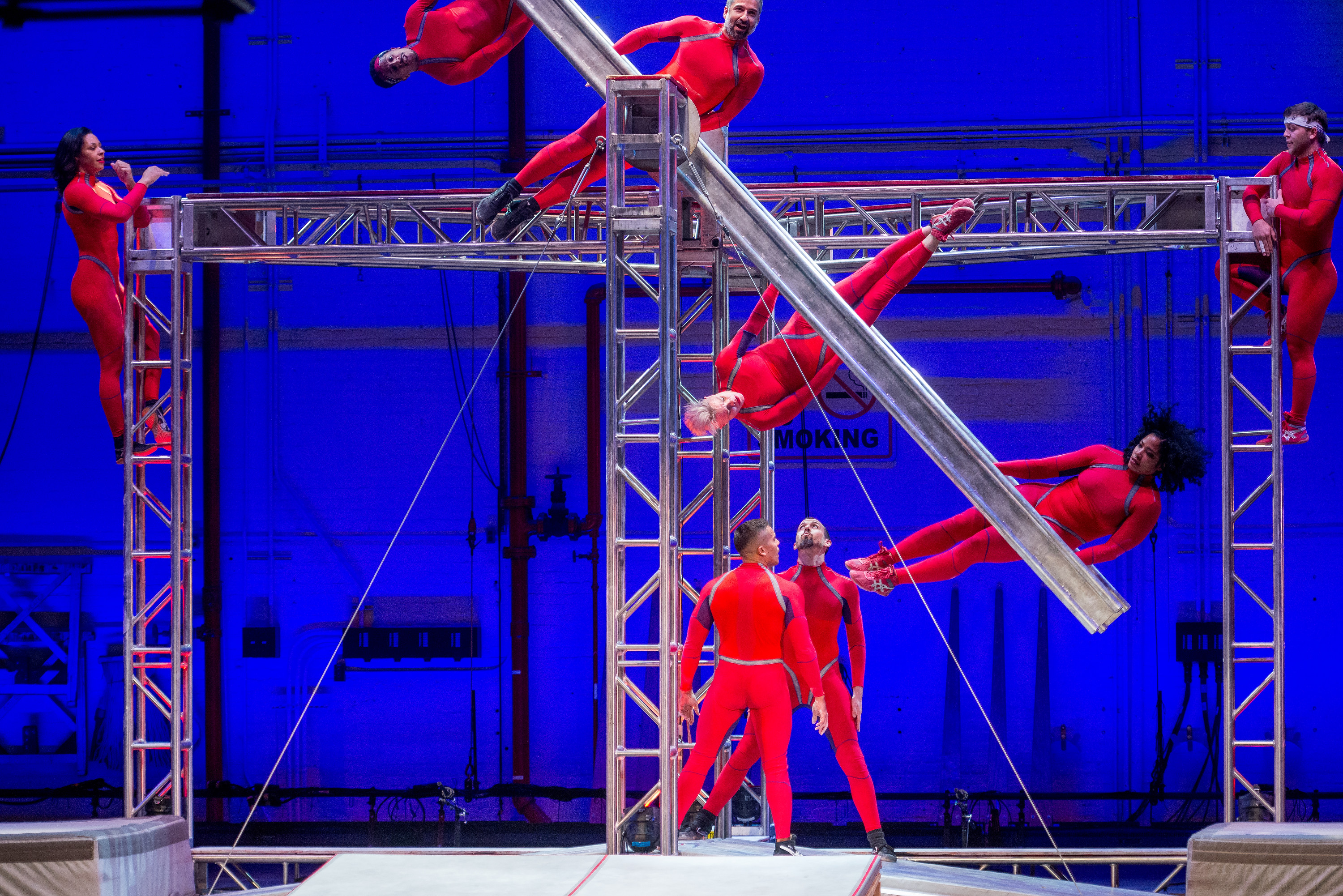 Another fall, another Fall for Dance: five programs, 20 dance works—a festival, if you like; a smorgasbord; a mess. Any or all three words apply.

Where else can you take in such a wide assortment of styles and approaches—yes, such cultural diversity. But then how much cultural diversity are you equipped to take? The first program, for instance, started with a bang (a lot of bangs) from Streb Extreme Action, Elizabeth Streb’s nine-member crew of … of what? They may be exemplary dancers, but how can we tell? There’s no dancing here. It’s pure acrobatics, with performers hurtling down onto boards and rolling around, scampering up and down a giant rotating ladder, gleefully risking life and limb, all in the service of sheer excitation. I don’t enjoy circuses (or Cirques), and this two-part commissioned worked called Airslice left me impressed by the pyrotechnics but drained of any reaction other than irritation.

Then came Dada Masilo/The Dance Factory from Botswana, with a new take—the millionth?—on The Rite of Spring. Foolish old you thinks that its music is by Stravinsky, but Dada Masilo has chosen to throw some Arvo Pärt and some Max Richter into the mix. (Why didn’t Diaghilev think of that?) Lots of shuddering and juddering and twitching in the dark before the Chosen One sheds her garment and goes the way of all Chosen Ones. Spring, as this work is called, gets points for sincerity. 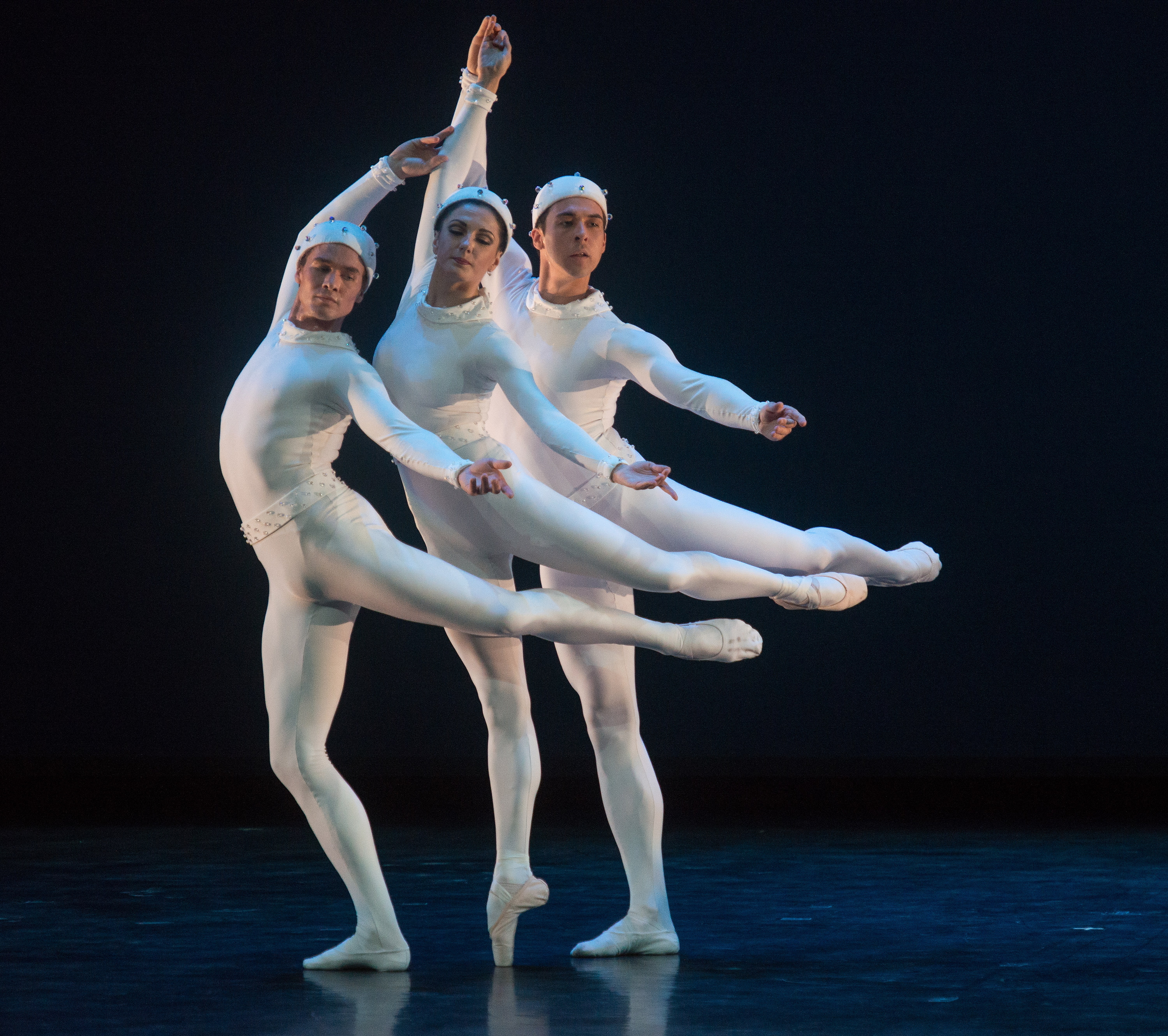 From ABT we had Ashton’s Monotones II—oh, the relief! A genuine work of art! But not brilliantly performed (Cory Stearns, Veronika Part, Thomas Forster) and badly missing Monotones I. I don’t get it: if they can import five dancers to 55th Street all the way from Botswana, why not three more from the ABT studios just down the street? As for the final number on the program, we had the return of Farruquito, in a solo (with onstage musicians) called Mi Soledad. The program note tells us that this is a celebration of flamenco puro, but to me it was a celebration of unbridled narcissism. Tall, dark, handsome—he looks like a guy on the cover of a paperback romance novel—Farruquito gives us brilliant footwork, vehement frowns and smiles, and self-satisfaction taken to the max. I couldn’t bear to look at him.

I’ll spare you a program-by-program walk through the 20 works on display and will focus on highs and lows. There was tap-dancing Ayodele Casel, accompanied by her recorded voice asserting her struggle against both racism and sexism. There was the return of the Bangarra Dance Theatre—17 dancers from Australia in Spirit, a kind of company retrospective, featuring a great deal of stomping, all made possible by the Australian Government’s Department of Foreign Affairs and Trade.

And there was the Hong Kong Ballet with the U.S. premiere of Shape of Glow—Glow of Shape?—a “real” ballet by the dread Jorma Elo—vapid, derivative, pointless, and long. Those poor brave dancers—apparently no one had told them that the Jorma Elo wavelet has long since worn it itself out (except in Boston, where he’s still the resident choreographer, I believe). The dancers were handsome, hard-working, and wasted—even the one really talented guy with exciting elevation and energy. The music was another mix—this time of Mozart and Beethoven. But since Elo is as unmusical as any choreographer of our moment, it hardly mattered what was being played. 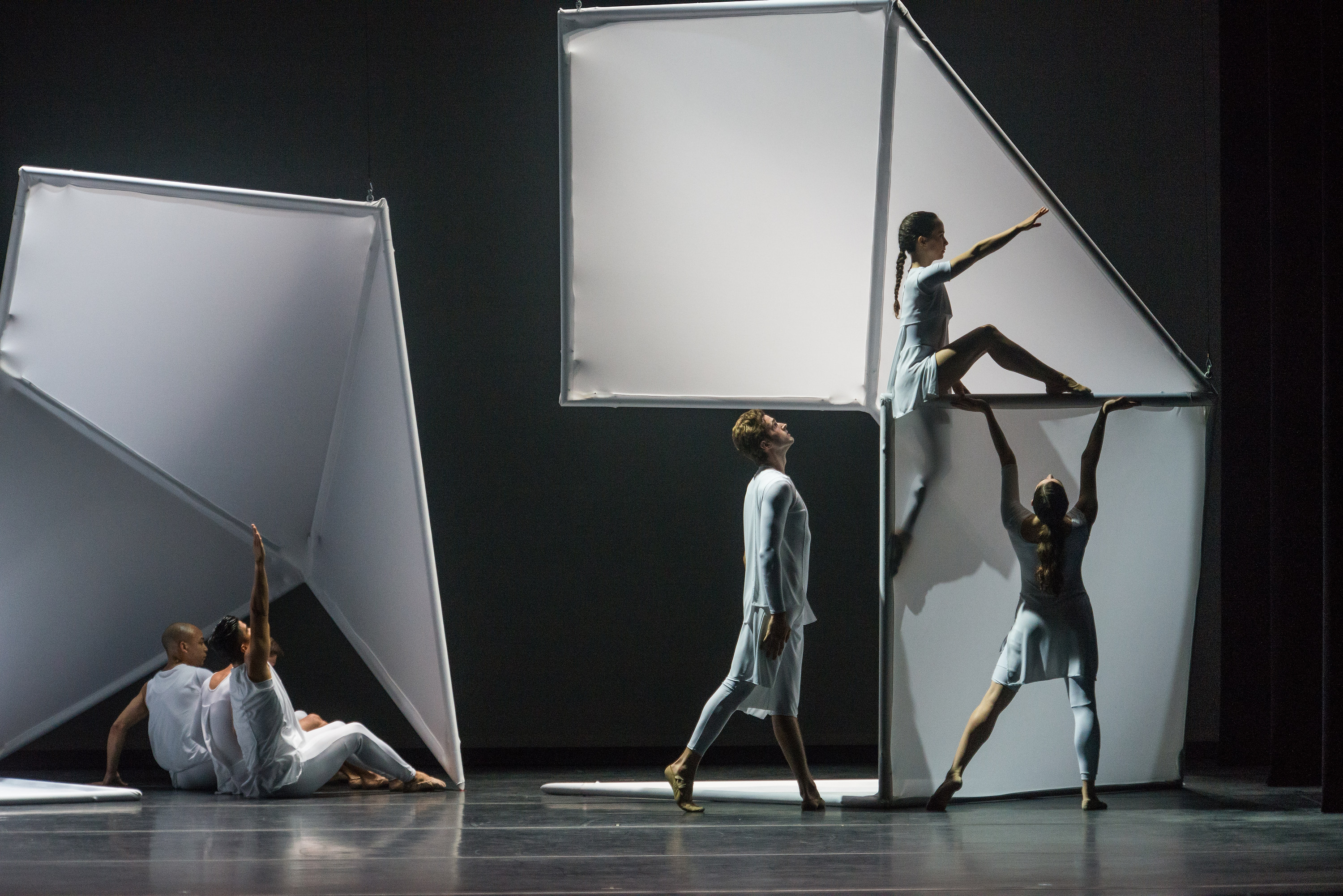 Two choreographers whom I can usually do without were seen at their best. Aszure Barton & Artists brought Awáa, which apparently translates to “one who is a mother” in the language of the Haida—“an aboriginal people living on the west coast of Canada.” Even so, it was solidly structured and convincingly performed. And Jessica Lang brought her company in Tesseracts of Time, five composers this time out (including the apparently inevitable Avro Pärt), and nine strong dancers, but this piece—which “explores architect Steven Holl’s basic belief about the relationship of architecture to the ground”—is less about its music or its choreography than about its effects. Very large geometric artifacts rise and fall, shift and regroup, while the dancers dance around, beneath, and through them—occasionally projected on them with film. In other words, it’s all concept. But better intelligent and successful concept than boring derivative dance.

I have to mention the starry names that popped up along the way, usually not to their advantage. It was a mistake to encourage yet another attempt by ex-City Ballet principal Wendy Whelan to prolong her career with inferior duets, this one by Arthur Pita (who brought his version of Kafla’s Metamorphosis to the Joyce several years ago, with Edward Watson as literature’s most famous bug.) Now Pita’s back, and Watson’s partnering Whelan in The Ballad of Mack and Ginny (Kurt Weill)—a sort of “Frankie and Johnny” in which she stabs Watson in the stomach, but not until he’s ripped off her shirt leaving her to coyly keep her back to the audience until she sidles offstage. Everything about this effort was fakey, including the smoking.

Another favorite “retired” ballerina back with a vengeance is Alessandra Ferri, who was yet again before us with her real-life partner Herman Cornejo, in Witness, by Wayne McGregor. Smooth, unchallenging, unnecessary but comely, this is another piece designed to advertise their feeling for each other. And why not? Particularly since we were able to admire once again her still-beautiful legs and feet. 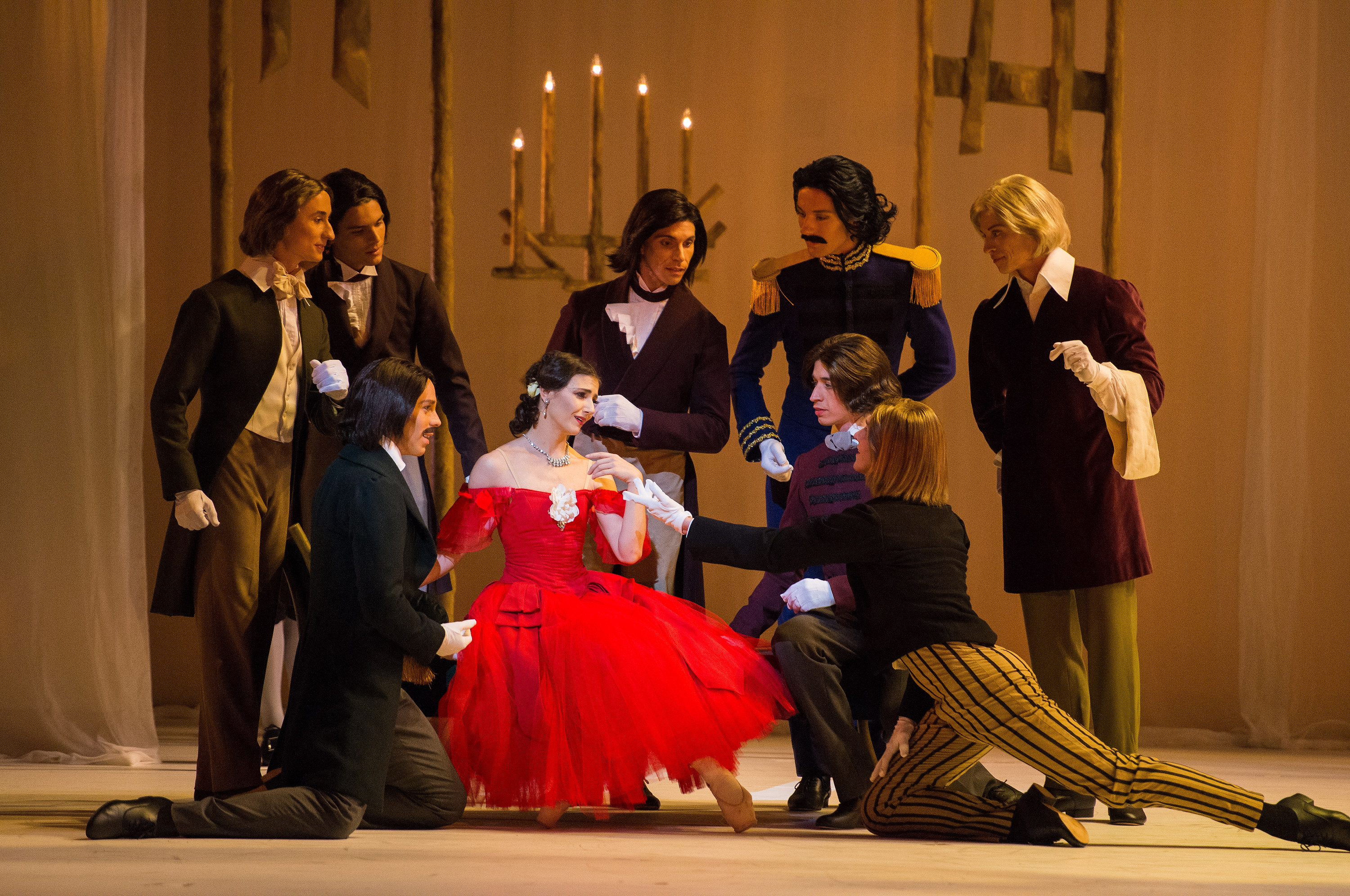 We got to choose between the Nederlands Dans Theater with Wake Up Blind, set by Marco Goecke to two lugubrious songs by Jeff Buckley, and the Royal Ballet of Flanders, with Fall, by Sidi Larbia Cherkaoui, set to—you’ll never guess!—Avro Pärt. My vote went to Flanders, because it flowed along so pleasingly.

I also have to report that the Sarasota Ballet, Ashton specialists, ignored all the Ashton we’d love to see in favor of his meretricious Marguerite and Armand, which was junky even when performed by Fonteyn and Nureyev and is junkier with lesser stars, even if one of them is Alina Cojocaru. She’s a wonderful dancer, with a penchant for pathos, but she’s far from the glamorous creation of Dumas fils. Think Fonteyn, Callas in La Traviata, Garbo in Camille, Bernhardt in this her most famous role! Friedemann Vogel has the longest most shapely legs you ever saw, but an actor he isn’t. Johan Kobborg, that excellent dancer, is wasted on Armand’s father—the action skips along so fast, in Classic Comics vein, that if you don’t know the story, it’s impossible to figure out what he’s up to. As for the corps, they were utterly unbelievable as mid-nineteenth-Paris at its most glamorous. And the wigs those poor boys had to wear! 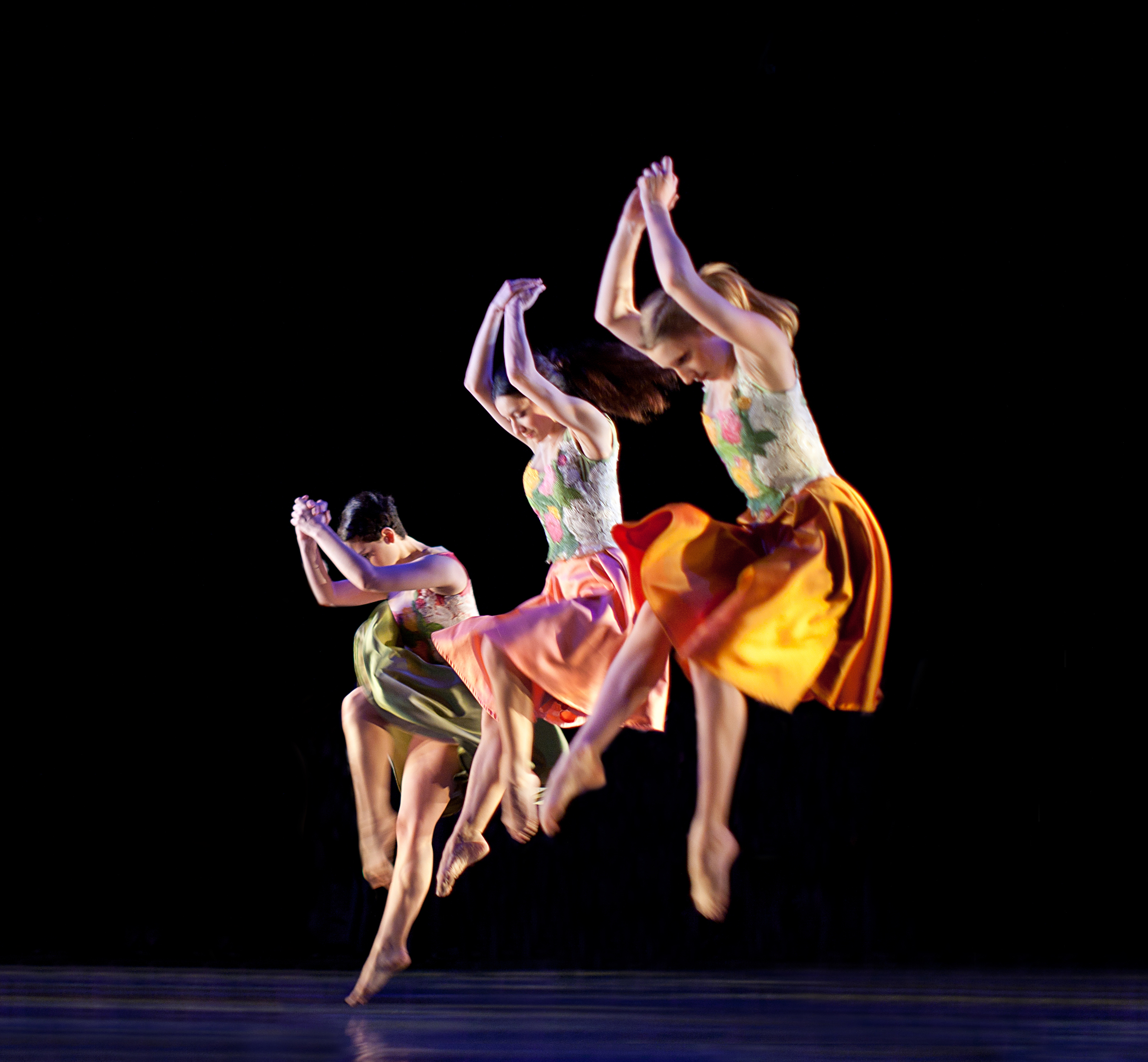 And more and more and more, turning up from Brazil, India, Taiwan, France and Aileyland (Cry). Best by far was Richard Alston’s Rejoice in the Lamb, music by Benjamin Britten. Alston is a first-rate, deeply experienced English choreographer whom we’re finally beginning to know in America, and about time too. This is a quiet, compelling spiritual drama, with inspiring choral music performed here by the Montclair State University Vocal Accord and populated by Alston’s own dance company—the dancers graceful, open-hearted, fluent, and in tune with the devotional nature of the entire work. Nicholas Bodych danced the central character, the poet Christopher Smart, and he was perfect. So were the simple costumes (by Peter Todd). Rejoice in the Lamb was was beauty and a balm.

What I took from this season was a strengthening dislike of dancing in the dark—piece after piece began without lights, and many of them never got much brighter—and the sad realization that dance is growing further and further detached from music. The raison d’être of Balanchine and Ashton, and their successors Taylor, Morris, and Tharp, seems to be slipping away from us. 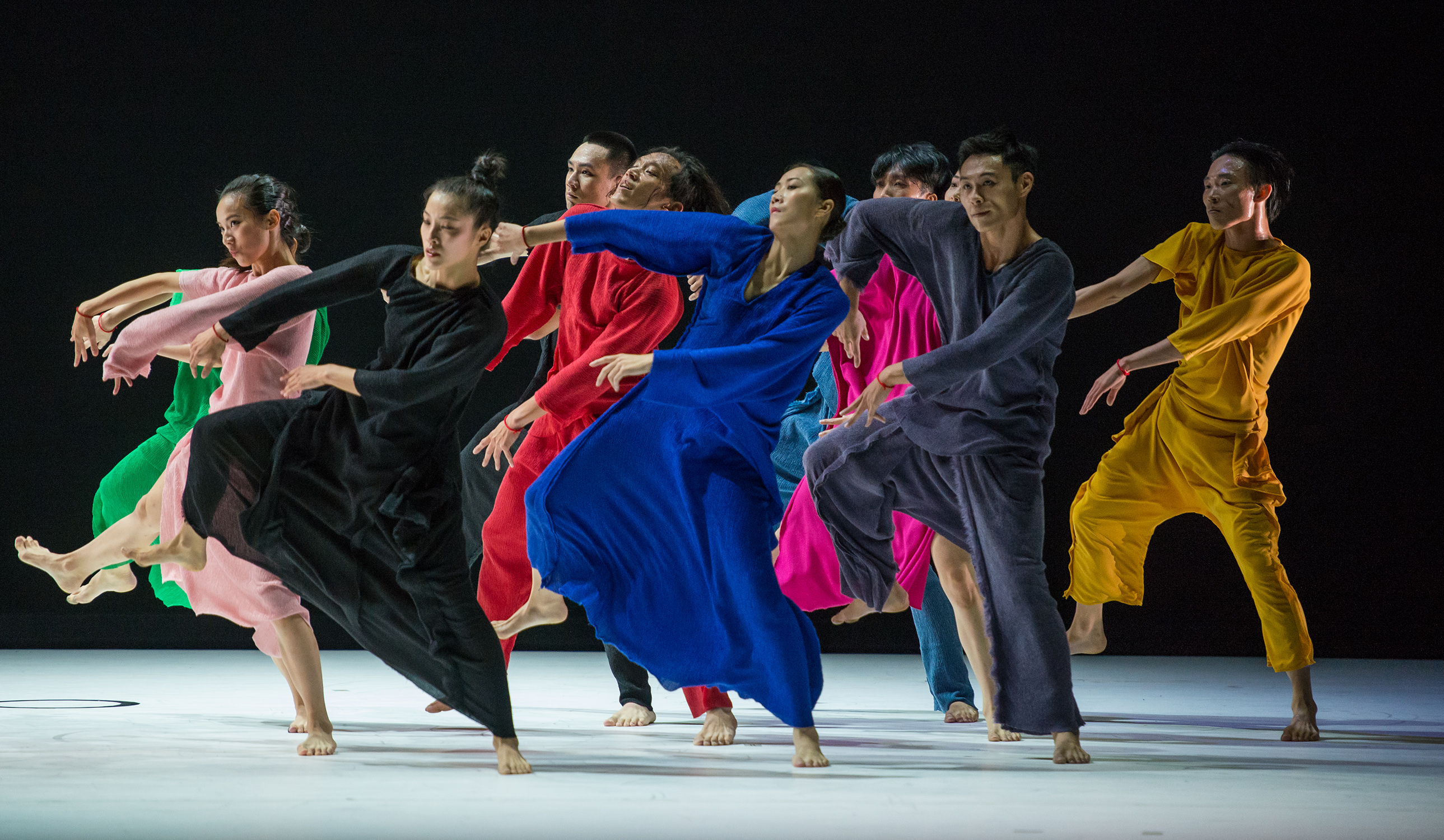 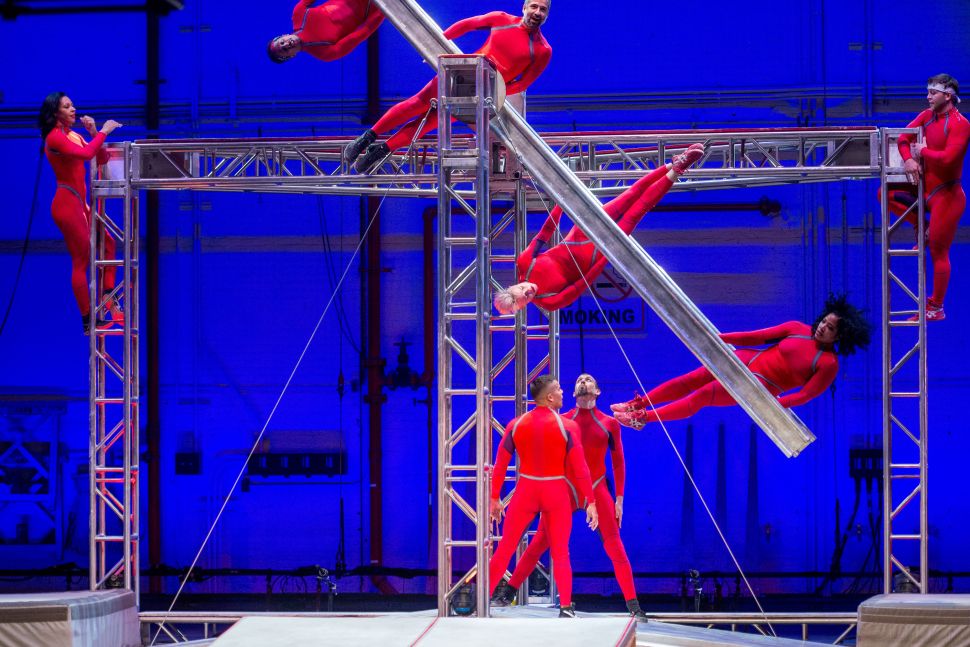