The major auction houses are sailing into the fall sales with some notable artworks on offer. They nonetheless face some strong headwinds both in the U.S. and around the world.

Much of that involves uncertainty for buyers and sellers alike about the art market and the economy more generally. Prospective consignors are wondering if the current strength of the U.S. dollar will limit foreign participation, while potential buyers are asking if a slowdown in Chinese, American or European economies will make this a time to cut back significantly on all major purchases, including, of course, art.

“It’s not a particularly confident moment, with a number of factors contributing to this apprehension,” said Natasha Degen, professor and chair of the art market master’s program at Fashion Institute of Technology. Among those factors are “the uncertainty of the U.S. election, Brexit, low oil prices, turmoil in the auction business and a slowdown in the ultraluxury real estate market.”

However, if economic uncertainty generally tends to dampen risk-taking—or, in the art market, the willingness of buyers to aggressively compete for artwork and pay record prices—the degree to which uncertainty underlies the behavior of buyers is unknown.

“The people who buy art at this level, the top 0.01 percent, are in a different economy than the rest of us and are well insulated from any slowdown,” said Gerald Friedman, an economics professor at the University of Massachusetts at Amherst.

One thing we do know is that there will be some important pieces to bid for.

“That’s a meteoric rise in prices over a four-year period,” Macaulay said, though he admitted that in another year the Richters might’ve had higher estimates.

Additionally, Sotheby’s will feature David Hockney’s Woldgate Woods, 24, 25 and 26 October, 2006, a 10-foot-wide, six-part painting (estimate $9 million to 12 million) that was a crowd-pleaser at the London-based Royal Academy’s blockbuster 2012 exhibition David Hockney: A Bigger Picture. Gregoire Billaut, head of the auction house’s Contemporary art department, called the painting “one of the great accomplishments of the artist’s late career.”

One of the highlights of Christie’s November 16 evening sale of Impressionist and Modern art is Wassily Kankinsky’s 1934-35 Rigide et Courbe (Rigid and Bent), from the period in which the painter lived in Paris. Kandinsky fled Berlin in 1933 after the Nazi government closed the Bauhaus where he had been teaching, and he settled in the Parisian suburb of Neuilly-sur-Seine, where he spent the last 11 years of his life. The painting, estimated at $18 million to 25 million, was last brought to market in 1964 and has been in a private American collection since.

Conor Jordan, deputy chairman of Christie’s Impressionist and Modern department, said the painting reflects optimism on the artist’s part to being out of Germany and “evokes an epic paean, a rhapsodic song of thanksgiving.”

Willem de Kooning’s 1977 Untitled XXV, estimated at $40 million, leads Christie’s November 15 sale of postwar and Contemporary art. The deceased British art critic David Sylvester called 1977 an artistic highpoint in de Kooning’s career, noting that artworks from that year “belong with the paintings made at the same age by artists such as Monet and Renoir and Bonnard and, of course, Titian.”

Phillips has, for its November 16 Contemporary sale, a 1990 abstract painting in reds and blues by Gerhard Richter (Abstraktes Bild), estimated at $5 million to $7 million, as well as an untitled 1988 six-paneled anodized aluminum and colored Plexiglas work by Donald Judd, estimated at $2.5 million to 3.5 million.

“Judd said that the main elements of visual art are material, space and color, and this work has all of those,” said Jean-Paul Engelen, Phillips’ worldwide head of Contemporary art.

Christie’s has its own abstract Richter to sell, the 1994 Abstraktes Bild 809-2, which was consigned by rock musician Eric Clapton, who purchased the work from the collection of Ulla and Heiner Pietzsch in 2001. Richter created four paintings in the “Abstraktes Bild” series, which were first exhibited in the early 1990s at London’s Anthony d’Offay Gallery.

A 1956 Alexander Calder mobile, Two Horizontals and Nine Verticals, estimated at $1.8 million to 2.5 million, is also for sale at Phillips.

Engelen spoke of “opportunities when good material is being offered” but noted that “insecurities” on the part of buyers, consignors and the auction houses themselves have resulted in “less material coming onto the market.” That insecurity has also steered auctioneers and buyers away from younger artists whose markets are more speculative and toward blue chip artists, such as Judd and Richter. “You need to be respectful to the younger artists and to the galleries that represent them, but there is no point offering material when you can’t sell it,” he said. Indeed, it could be bad for the artist’s prices down the line as well as for the house.

Many analysts have noted the potential effects of economic slowdown in Europe and China, but they are not all of a piece. Although Chinese economic growth has diminished somewhat recently, that was intentionally undertaken by the government, which has sought to limit rampant borrowing and overproduction. The government’s actions are seen as averting a more acute crisis. In fact, Chinese art buying now leads all other nations.

Economies in the Eurozone, on the other hand, have stalled recently because of Brexit, which has also led to a softening in the market for ultraluxury real estate (defined by a Coldwell Banker in a 2012 Exclusive Luxury Market Report as residential properties costing $10 million and up) in London. Economists often find a strong connection between the markets for high-end real estate and high-end artwork. Prices and demand for expensive property in Manhattan have slowed as well, of course, but that may be more a result of oversupply at the ultraluxury price point than a weakening or nervous economy. Art buying in the U.S. has remained strong, while the success of the recent July sales at London auctions was attributed to the devaluation of the pound, as U.S. and Chinese buyers were able to purchase objects 15 percent less expensively than just one month before.

The strength of the U.S. dollar, relative to the Euro, the British pound and Chinese renminbi, also may be an overblown factor, as the dollar tends to be the main currency used by international traders.

“The big art buyers in London are hedge fund managers who are paid in dollars,” said Philip Hoffman, founder of the London-based Fine Art Fund, a private equity firm specializing in artworks, “so changes in the value of the pound don’t affect their purchases of art.”

Additionally, the dollar strengthened against the Euro by 25 percent between 2014 and 2015, so “the increase in 2016 is not enough to have a major negative impact in this year versus last,” said Kimberly Amadeo, president of World Money Watch and author of Beyond the Great Recession. “In other words, most of the damage from a strong dollar has already been done.”

While being paid in dollars, rather than in devalued local currencies, might appeal to consignors, London art adviser Constanze Kubern said the uncertainty in the U.K. and Eurozone make people fear this is the wrong time to cash in: “What are you supposed to do with the cash? Where do you put it?” She said the number of lots in major auctions in the U.K. in July and in New York in November was lower by 30 percent.

Upper level staff turnover at the major auction houses may well be adding to a sense of unease among buyers and consignors. A number of staffers have left Christie’s since Patricia Barbizet took over as CEO in 2014, some to join Phillips (Robert Manley, who was the New York-based deputy chairman of postwar and Contemporary art; Hugues Joffre, who was in charge of postwar European art; and Vivian Pfeiffer, director of private sales in North America and Latin America). Another from Christie’s was Engelen, who had been senior director and specialist in postwar and Contemporary art, before becoming Phillips’ worldwide head of Contemporary art. Cheyenne Westphal, worldwide head of Contemporary art at Sotheby’s, also left to join Phillips, as chairwoman. Another 14 top staffers took buyouts from Sotheby’s earlier this year.

“What will be interesting to see is, in an industry that relies on personal relationships, how the emigration of talent from one auction house to another will change the long-term positioning of the auction houses,” said Suzanne Modica, a Manhattan art adviser.

This down period may be advantaging art dealers and galleries over auction houses, since sellers would be reluctant to consign their works for public sales if they fear weak bidding or missing the reserve, according to Anders Petterson, founder of the London-based Art Tactic, which follows the art market. “Sellers might prefer the private market rather than exposing the work to the public market, unless it is of exceptional quality or supported by a financial guarantee.”

The last bit of uncertainty involves the U.S. presidential race. Apprehension about the prospect of a Donald Trump presidency is “already driving some people to be cautious in terms of major expenditures, holding off until they know how things will turn out,” said New York University economist William Baumol, adding that the hesitancy is a result of how difficult it is to predict what might happen.

“I didn’t hear much about Brexit at Art Basel this past June,” said Anthony Meier, a San Francisco art dealer who was director of 2016’s The Art Show in New York City this past March, “but there was a constant drumbeat of questions there about Donald Trump. People ask, if he wins, will the stock market shrink or expand? If it shrinks, where do I put my assets?” Fear for the financial security of the country may take a backseat to the desire to own a Gerhard Richter for those in the market for the artist’s work, but “calamities and worries about potential calamities use up a lot of your mental bandwidth,” he said. ”There is always some kind of calamity…but, I don’t know, this presidential election is making a lot of people jittery.” 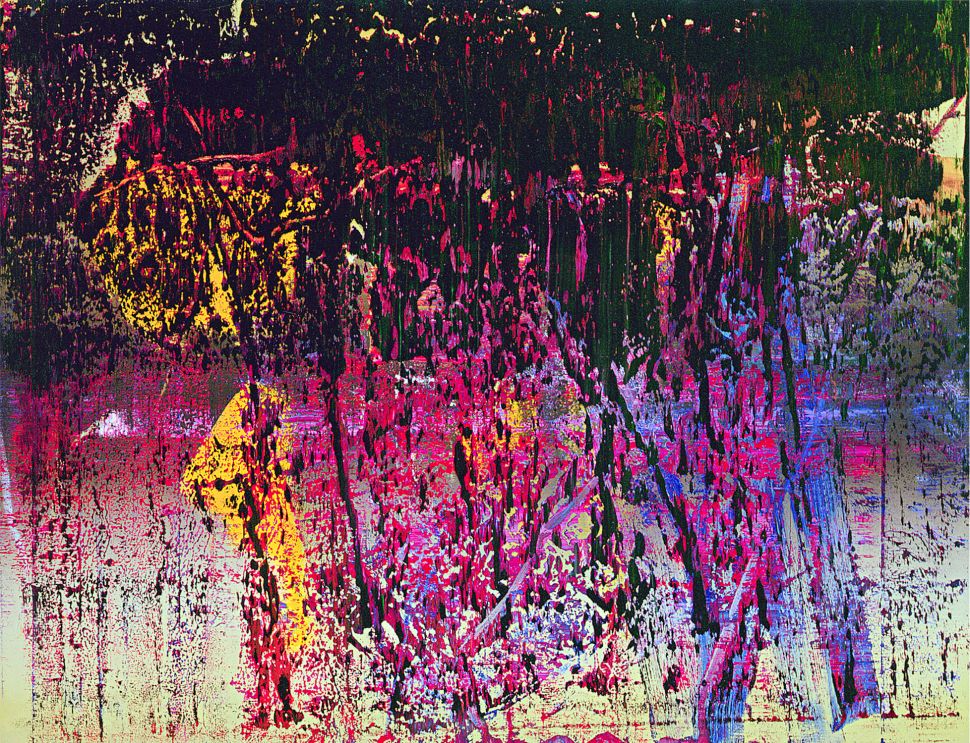