It is not easy being a fervent environmentalist and a lifelong Cubs fan. Take Fisher Stevens. Currently, the actor-director-producer is standing in the lobby of the Four Seasons Beverly Hills in hotel slippers, about to chat up his new climate change documentary that stars Leonardo DiCaprio. But tomorrow he’ll be jetting off to Cleveland for Game 2 of the World Series. Friday, it will be back to Cali to show the film to some climate scientists at Stanford. Come the weekend, he will be burning the jet fuel once again with a flight to Chicago for Game 4. The irony—a harsher, Fox Newsier word would be “hypocrisy”—is not lost on Stevens or his family. “This is all really bad for my carbon footprint,” he says, sheepishly. “My girlfriend keeps telling me, ‘You’re terrible! You’re not practicing what you are preaching.’ I know. I know.”

What he doesn’t say, but what is implied, is that he just can’t help himself, that he is a man of outsized passions. At the moment, his two strongest ones—Chicago’s north side club and the fragile state of our planet—just happened to be in direct opposition.

“Why are the Cubs peaking this year?” he says in a the-Gods-have-forsaken-me sort of way. “I was out of work for years and years!” Fortunately, Stevens has crafted a solution of sorts. “I defend my flying by paying a carbon tax for it,” he says. “My girlfriend is not happy about it. It is going to be a lot.”

One buys the argument as much on the strength of Stevens’ hustle as on his logic. At 52, he still carries much of the same street-smart, balls of his feet swagger that made his appearances as a character actor in 80’s films like The Brother from Another Planet, The Flamingo Kid, and most notoriously (especially if you’re Aziz Ansari) Short Circuit and its sequel, so memorable. He is a fellow who seems to be always working the angles—he was on the phone negotiating his Cubs tickets moments before saying hello—almost like he had spent most of his 35-year film career trying to talk his way past security instead of being invited in.

It is a quality that makes his late career shift to one of the premiere makers of environmental and climate change documentaries simultaneously strange and completely fitting. This soaringly successful aspect of his career—his first dip in these waters won him an Oscar as a producer on The Cove, while its follow up, last year’s Racing Extinction, scored an Emmy nomination—hits its apex with Before the Flood.

Two and a half years in the making, Before the Flood premieres Oct. 30 on the National Geographic Channel and across digital and streaming platforms around the world. It is not just the most ambitious of the growing genre of environmental peril documentaries, it is also the only to feature the guy from the Titanic in pretty much all of its frames. In the film Stevens and his UN Messenger of Peace travel to all ends of the earth—from the tar sands of Alberta to the rapidly shrinking ice fields of Greenland to the smog choked streets of Beijing—to look at the environmental and social impact of fossil fuel consumption. Sufficed to say, the carbon tax they paid for making it set the pair back considerably more than even the exorbitant price Steven’s undoubtedly paid for his seats to Game 4 at Wrigley.

“This movie is about furthering a cause or movement, one that I feel so passionate about,” says Stevens, whose strength (including his love of the Cubs) has to do with not just wearing his emotions on his sleeves but laying them down on the counter like currency. “It blows my mind that in three presidential and one vice presidential debate there was not one question about climate change. Are you fucking kidding me? What is it going to take? Is it going to take another Sandy to wake people up?” He takes a breath before continuing. “Have you read the New Yorker piece that Elizabeth Kolbert just wrote on Greenland?” he asks not pausing for an answer. “It is more devastating than what you see in our film. She found out that you could fill New York State with 23 feet of with the melt that has come off in the last three years!”

Again, he comes up for air before adding, “What’s it gonna take, man? I don’t know. But that’s why I keep doing this shit.”

The film was a product of the merging of the mirrored passions of Fisher and DiCaprio, who bonded over the issue during a trip to the Galapagos hosted by oceanographer Sylvia Earle seven years ago. Stevens was impressed by how both well-informed and endlessly curious DiCaprio was on the topic, and the shared profession of acting gave them a kind of shorthand. It also helped that Fisher bore no resentment towards DiCaprio despite the fact that his career had garnished so much acclaim while Fisher had spent his brightening films from their edges.

“It wasn’t like that with Leo—Leo was different,” says Stevens. “There are people like that, like Ed Burns, who really stick in my craw. I’m sure Ed Burns is a really nice guy and I have nothing personally against the guy, but I just don’t see talent there. Leo on the other hand is a talented motherfucker. He’s good-looking—I guess Ed Burns is good-looking too, okay, I’ll give Ed Burns that—but Leo is substantial. We actors bitch about people like Ed Burns. Trust me, I could give you a list of people like that but [my publicist] would kill me. But this guy Leo is this guy that all of us actors looked up to and still do. We have a lot of respect for him. So I was never jealous. I never hated him.”

Buoyed by a score from Atticus Ross, Trent Reznor, Gustavo Santaolalla, and the band Mogwai, Before the Flood scoots along as speedily as Fisher’s patter. DiCaprio, whose commitments included making The Revenant and winning an Oscar for it made his scheduling among the film’s largest challenges, not only hops continents but puzzles over the issues with such towering figures as Tesla’s Elon Musk, meteorologist and astronaut Piers Sellers (who provides the film with a moving coda), activist Sunita Narain, Pope Francis, and President Barack Obama. One of the odd pleasures of the film is seeing DiCaprio stiff and nervous in front of these dignitaries, not unlike a typical wire reporter stuttering out a question to him at a Departed junket.

“Leo is by nature a pessimistic guy,” explains Fisher. “That is just who he is. When we interviewed Obama, Leo says to him, ‘I admire your optimism, but sea levels are rising. What terrifies you?’ After the camera cuts, Obama took him aside and said, ‘Leo you got to make sure there is some hope in this movie, man. This can’t be all doom and gloom.'”

“He was genuinely nervous talking to those guys,” says Fisher. “He is very vulnerable in this film. I don’t think that was easy for him, not at first. He’s not used to being Leo and being that way.” Another issue DiCaprio brought to the table was his genuine fear that we have gone too far and there is no going back. “Leo is by nature a pessimistic guy,” explains Fisher. “That is just who he is. When we interviewed Obama, Leo says to him, ‘I admire your optimism, but sea levels are rising. What terrifies you?’ After the camera cuts, Obama took him aside and said, ‘Leo you got to make sure there is some hope in this movie, man. This can’t be all doom and gloom.'”

And the film isn’t: it is a call to action, not an epitaph. While solution oriented, Before the Flood but never lets you forget the ticking clock. It confronts both the issue and the people that are equally certain that it is a nonexistent liberal boogieman. He considers it a good sign that it is airing on the National Geographic Channel, which is under the same Rupert Murdoch corporate umbrella as Fox News, the primary platform for climate change denialism. “Rupert’s son James is on the board of the Environmental Defense Fund and is a firm believer in climate change,” says Stevens. “So is Lachlan. Maybe this is a sign of progress.”

Making these sorts of movies—and Fisher has little intention of stopping—has taken time away from acting, the profession Fisher started training for when he was 14. He squeezes in something small now and again; he was Monsieur Robin, one of the members of the Society of Crossed Keys in The Grand Budapest Hotel, and showed up as a pharmacist in The Night Of… in support of John Turturro, whom he came up with in New York in the 80’s. These days the subject tends to make him a little melancholy.

“My relationship with acting right now is kind of sad,” says Stevens. “I miss it.”

“My relationship with acting right now is kind of sad,” he says. “I miss it. I’m hoping that I can do a little more. But this is the stuff that gets me going and I want to do more shit like this. I’m really inspired right now. I want to keep telling the stories. The thing about acting is that there’s a lot of waiting and I don’t feel like waiting anymore. With this, I don’t have to wait. All I have to do is raise a little money and go shoot and tell the story.”

He is also sick of waiting as a Cubs fan. The Chicago-born Fisher was in the stands in San Diego watching Steve Garvey gut and fillet his team in ’84, and was in Queens last year (just a subway ride, no carbon tax) to see Daniel Murphy do it to them again. “There’s something about Murphy,” he says with resignation. “That guy did some number on the Cubs.” In between those twin traumas, he was in the stands at Wrigley for the nightmarish Bartman Game in 2003. “Listen man, I’ve suffered,” he says.

Another passion that has caused him a lot of suffering? Sounding the clarion call for climate change. But it seems to be the kind of pain he prefers. “I’ve got to tell you, it’s not a lot of fun making these movies,” says Stevens, who contracted malaria while shooting footage in the Amazon that didn’t even make it into the final film. “It’s much more fun going and acting on Law & Order. So why do I do it? I think the answer is pretty basic: I have an opportunity to do it and it needs to be done. And I’m never going to stop now. I can’t stop.”

Before the Flood premieres on National Geographic Oct. 30th at 9 p.m. ET. 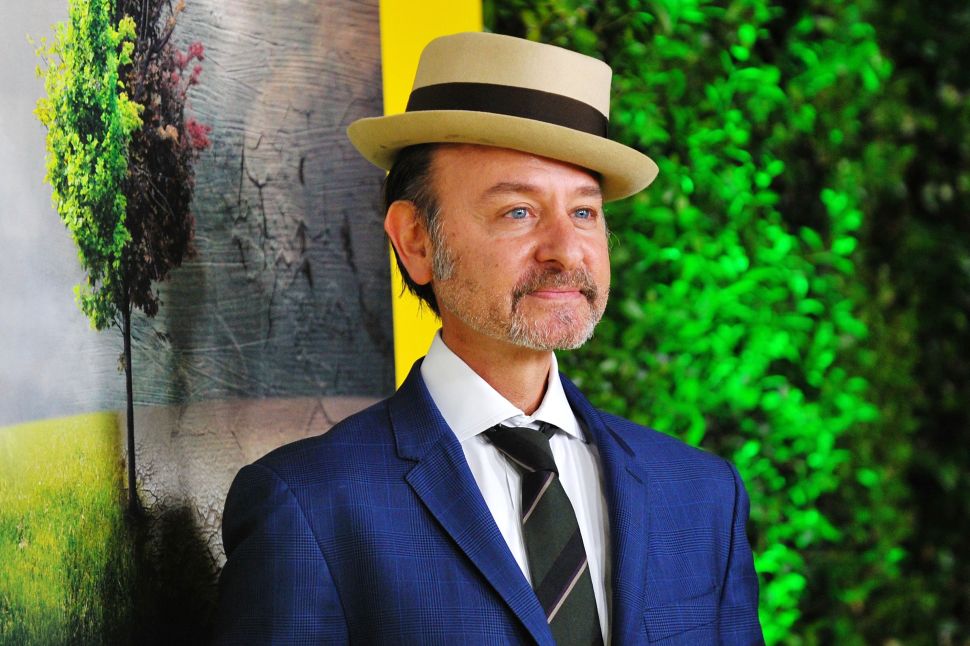