Before Tuesday night it had been a while since I’d seen Elvis Costello in concert. I won’t test your patience with “back in the day” stories, I have only a few, and the first show was not until the spring of 1984, when he performed solo (just the man, his guitars and a keyboard) at the University of Massachusetts in Amherst. I was 17.

A few months later, I got to see him with the legendary Attractions. By then I was a full man of 18 and fully in the thrall of all of his records; buying Imperial Bedroom when it was released in 1982 was probably like a junior in high school in 1966 buying Blonde on Blonde. Or perhaps like the teenage Declan McManus, young Elvis Costello himself, who was disappointed with the Beatles’ Rubber Soul upon its release in 1965, as Costello confesses in the new Ron Howard film, The Beatles: Eight Days a Week—the Touring Years.

Like Costello expecting more sterling and shimmering rock ‘n roll gems from his heroes, we Costello fans rushed out to buy the newest album by the master of acerbic and economic punches of punk-propelled pop brilliance displayed on five of his previous six albums.

The immediate predecessor, Almost Blue (1981), had already indicated newer, more “mature” potential directions. But that was an album of country covers and spinning the opening track of Imperial Bedroom, “Beyond Belief,” we were confronted with a dense and challenging production of Costello mixing his sleepy delivery with an almost speed-freakish verbosity: “History repeats the old conceits/The glib replies, the same defeats/Keep your finger on important issues/With crocodile tears and a pocketful of tissues.”

Drawn as I was to a song that was like overhearing the drunken pillow talk of adults in the next room, my patience paid off by the time of the resounding refrain, “I’ve got a feeling/I’m going to get a lot of grief/Once this seemed so appealing/Now I am beyond belief.” And the rest of the record, though it took a few spins, soon revealed itself to be a masterpiece and a lasting one at that.

Since it had been so long since seeing Costello perform with his band—now called the Imposters but consisting of 2/3 of the Attractions, keyboardist Steve Nieve and drummer, Pete Thomas—a tour billed as “Imperial Bedroom & Other Chambers” was more than enough to lure me out on Tuesday night at the Orpheum Theater in Boston.

By the time he got to “Beyond Belief”, it was more than 75 percent through the show, a set that had started wobbly, with a horrid front-of-house mix and acute vocal pitch issues. Costello’s voice was noticeably hoarse, probably from the preceding performances on the tour, and he seemed to struggle down in his lower, crooning register, consistently flat, as if he could not properly hear himself.

How many of us can recall a single bum note from this singular singer, never mind the entirety of the first half dozen songs in a set? Add to that that Costello was singing significantly behind the beat consistently, either by design a-la swingin’-at-the Sands Sinatra, or to keep up with what seemed to be the lyrics on a music stand in front of him, or both, and there were more than a few concerned glances among audience members. Comparing notes with friends who were scattered throughout the theater, the take was the same: oh no, this sounds just plain bad.

But in what is probably the best comeback within one set that I have witnessed, something clicked around the seventh song (31 were played in all) and Costello seemed to awake, throw caution to the wind, loosen up, and fell in sync with his superior band (rounded out by ace bassist Davey Faragher, and the very-welcome, spot-on backing singers Kitten Kuroi and YahZarah), and just started belting it.

Sure, pitch issues remained, notably on “Almost Blue” (one woman near us wonder if he was singing somewhat flat here on purpose because of, you know, “jazz”). And while the mix continued bumbling along, it improved dramatically from the first few songs when it seemed possible that some instrument/amp microphones were actually accidentally muted and the only things that could be heard clearly were bass, drums and lead vocals.

While Costello has never been revered by many guitarists for his tone, Tuesday night was almost painfully shrill and almost completely indistinct from start to finish, with notable exceptions during ballads, solo/duo numbers, and acoustic parts.

But once it all came together, the show kicked with stellar performances and inspired and inventive arrangements.

How many times can the guy wring emotion out of the classic “Allison”? I have never heard the guy mail that one in and Tuesday night was a new apex.

Stepping out to the lip of the stage, flanked by his two backing singers sharing one antique carbon broadcast microphone with him, Costello, pro that he is, used his hoarse vocal to his advantage, projecting a bruised vulnerability, while supported in three-part harmony with the backing vocalists, enveloping the intimate theater like a warm old sweater—particularly welcome on the first cold night of the season in Boston.

The first standout of the set was “Lipstick Vogue,” though not quite at the amphetamine-fueled tempo heard on the fantastic El Mocambo live recording of 1978, a relatively rare treat nevertheless. And there was a brilliant re-reading of “Tears Before Bedtime,” which was slowed down to an intense, almost Ray Charles “Lonely Avenue” arrangement, a show stopper.

Seeing Costello now, that once button-pushing enfant terrible and always the provocative music adventurer, means an increasing amount of nostalgia manages to creep in for his audience, even as he literally tried to proactively protest otherwise from stage, noting that the tour was about the “here and now” and how the continuum of music—his and that of others—is not something trapped in amber, but relevant and vital.

While no one appreciates a good new live take on old chestnuts more than me, neither is anyone more likely to fully welcome the visceral emotional past rolling in like rip tide—and “Human Hands” knocked me back cold. With its soaring melody and killer lines, you can see why the ladies love him: “Every time I put my foot in my mouth and you begin to doubt that it’s you that I’m dreaming about/Do I have to draw you a diagram?”

Periodically throughout the night, I watched this stylish lady a row or two ahead grab her dud of a husband (presumably) by the arm and sing almost every line of every song while he begrudgingly stood up with her but seemingly could not wait to sit back down. Watching people my age (50) and older around me brought back to a time when these records meant so much to them was part of the joy in being there for this show.

There was a portly guy who could not have been younger than 65 at best, looked like a retired small town police chief, who knew every word of “Man Out of Time,” which you’ll recall has lines like “He’s a two-penny ha’-penny millionaire looking for a four-penny one,” and an all-time fave, “Love is always scarpering or cowering or fawning/You drink yourself insensitive and hate yourself in the morning.” But neither roll off the tongue. (By the way, check out this torrid version of “Man Out of Time.”)

Costello, not content to rest on such past highlights, unveiled two blistering new songs from what will be a musical based on the Budd Schulberg/Elia Kazan classic film A Face in the Crowd, which starred a young Andy Griffith as a con man demagogue. Now, what could be more relevant than that? 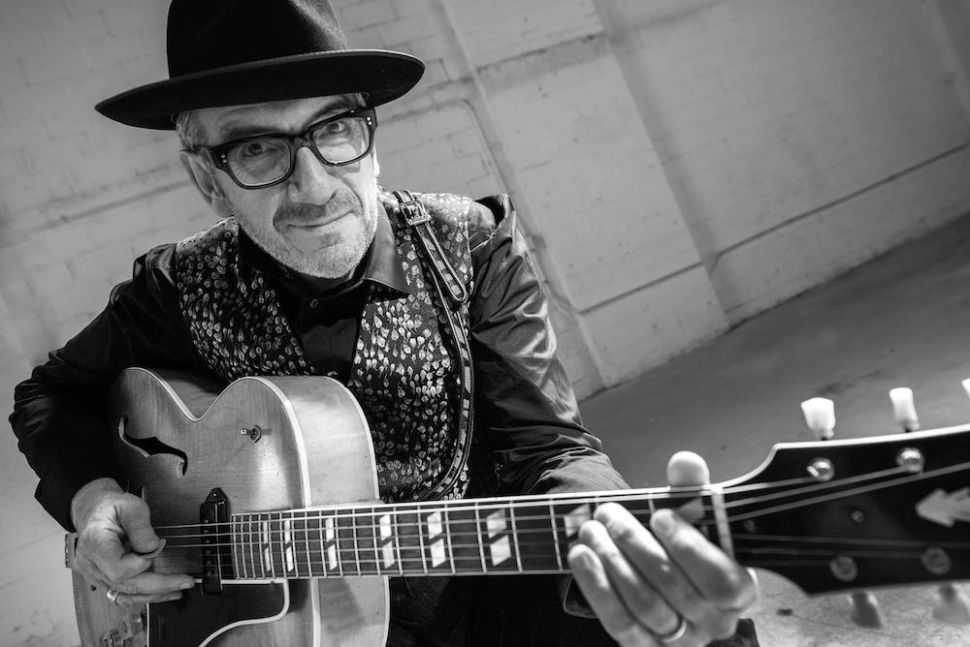