The Citizens Campaign today announced the kick-off of the Civic Challenge Campaign—a two million dollar statewide campaign designed to give citizens the power to fix New Jersey’s broken politics and government. The goal is to develop a citizen driven problem solving force advancing their own practical solutions and demanding a solutions focus at all levels of government. This bottom-up approach, according to Citizens Campaign leaders, is the way out of the rut of rigid ideology, blame game politics and the governing problems they create.

Joining the Citizens Campaign today are former Governors Tom Kean and Jim Florio who together are taking the Civic Pledge to leave their communities and country better than they found them by pursuing and supporting pragmatic solutions that are: (1) based on evidence of success (2) cost effective and (3) advanced in a no-blame manner. The two former Governors urged all New Jerseyans to join them by taking the pledge, and answering the Civic Challenge.

Citizens who take the Civic Pledge are asked to spread the Pledge by asking their friends, neighbors and social media contacts to join them.  Pledge takers are invited to advance the no blame, problem solving principles of the Pledge by: (1) becoming a proponent of  solutions-focused Civics Classes in high schools and adult venues; (2) becoming a Solutions News Gatherer who finds evidence-based solutions and introduces them into news stories on local government problems; or (3) becoming a Civic Trustee, committing to at least one year of service working with their fellow Trustees in the monthly no blame, problem-solving sessions of local Civic Trusts.

People who activate their pledge are assisted by a “dream team” of volunteer experts in government law, administration, media, and the political strategies of policy implementation. They also get access to both live and online citizen power trainings, and free manuals on citizens’ legal rights in local government and on citizen journalism as well as other support tools. Among the most powerful tools available to Civic Challenge participants is a Solutions Menu packed with evidenced-based local government solutions and a Ten Step Guide to No Blame Problem-Solving.

Harry Pozycki, Chair of The Citizens Campaign, said, “Our broken politics and government simply can’t be fixed from the top down.  Progress on our biggest problems can’t happen without citizens working together from the bottom-up to bring a solutions first focus to all levels of government.”

Pozycki continued, “To see how important this is you don’t need to look any further than this dispiriting Presidential election, the most negative in history.”

Governor Tom Kean said, “To repair our democracy and restore the fraying connection between the public and our government, citizens must realize their full power to fix our government. The Civic Challenge provides them with the road map to doing so. Jim Florio and I urge all New Jersey citizens to join us and take the Civic Pledge today.  It is the first and most important step toward restoring a healthy democracy.”

Governor Jim Florio said, “It’s time to move beyond our frustrations and join this principled movement.  Governor Kean and I are here together because we know that an engaged and problem-solving citizenry is the key to fixing our broken system.  Join us today in taking the Civic Pledge.  We can all answer the Civic Challenge and make New Jersey the lead state in this movement to restore sanity to our politics and government.”

The Civic Challenge Campaign seizes on the opportunities for a more powerful role for citizens created by both greater access to government records on current policies, including staffing and costs, and the technological ability to search for solutions with evidence of success. Citizens Campaign leaders noted that up until recently, this kind of information, which gives regular citizens the potential to play a significant role in developing government policy was the exclusive province of elected officials. The Civic Challenge Campaign also aims to take advantage of the ease with which citizens can now share successful solutions with their fellow citizens across the state and across the country.

The goal is to get 10,000 New Jerseyans to take the Civic Pledge and for a substantial number of pledge-takers to activate their pledge. In order to underscore the importance of civic life, the Civic Challenge offers anyone who takes the pledge in the next 2 weeks the opportunity to qualify for a drawing to win 2 orchestra seat tickets to Hamilton on Broadway.

The Citizens Campaign brings to the Civic Challenge Campaign a proven track record of helping citizens to advance solutions on the local, county and state level.  The active support of former Governors Kean and Florio, according to Campaign Leaders, demonstrate the strong bi-partisan backing for this effort. 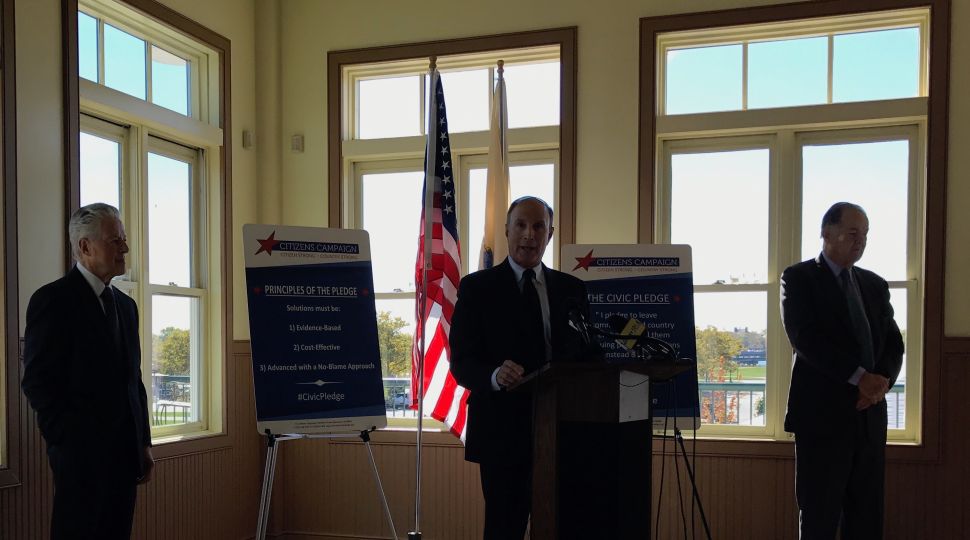