Brooklyn District Attorney announced today he will take a leave of absence to seek treatment for cancer—and his office refused to comment on whether he will seek his first re-election next year.

Thompson announced his illness this afternoon, without saying when or for how long he would give up his post. He only stated that his Chief Assistant Eric Gonzalez would take up his duties while he was gone.

“As a man of intense faith, I intend to fight and win the battle against this disease,” Thompson said in a statement for the press. “I humbly seek your sincere prayers as I confront this challenge and respectfully ask that you honor my family’s need and wish for privacy during this time.”

His office refused to comment further when the Observer inquired whether he would seek to hold on to his job in the 2017 election. Metropolitan Public Strategies, which ran Thompson’s first successful campaign three years ago, did not respond to repeated requests for comment.

A former federal prosecutor, the 50-year-old Thompson became an ascendant star in New York City politics after he defeated 22-year incumbent Charles Hynes to become his borough’s top prosecutor in 2013. Aligned with the growing Central Brooklyn political operation of Congressman Hakeem Jeffries and former Councilwoman Una Clarke, Thompson made headlines by clearing a number of Hynes’s questionable convictions for murder and other offenses, convictions that had earned his predecessor considerable ire from civil rights activists.

But he also attracted controversy himself for his administrative style, as investigators complained of being used as personal errand-runners. And, in August, the city Conflict of Interest Board slapped him with a $15,00o fine for using office funds to pay for his personal meals.

The son of a police officer, he also drew criticism from some of the same activist forces that lifted him into office. He briefly became a hero to the Black Lives Matter movement when he secured the indictment and conviction of Officer Peter Liang for the killing of black Brooklynite Akai Gurley—breaking with a national pattern of police escaping charges for killing African-Americans.

But both the Gurley family and an array of African-American pols blasted him when he recommended the cop serve probation instead of jail time.

Today, however, even Thompson’s greatest political rivals wished him a full recovery.

“Brooklynites have been privileged to have a fighter like Ken Thompson as the chief law enforcement officer of our borough,” Brooklyn Borough President Eric Adams, a former Hynes supporter, said in a statement. “I have no doubt that District Attorney Thompson will fight cancer with the same conviction and vigor that he has displayed his entire career.” 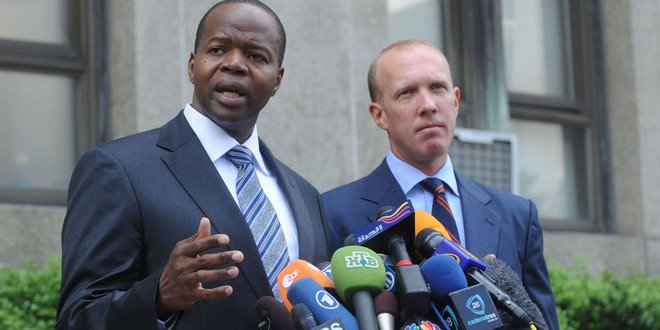