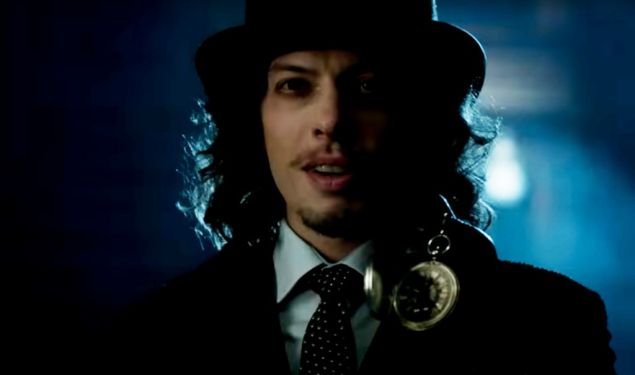 Benedict Samuel as The Mad Hatter on Gotham. Fox

EVERYBODY! Special announcement! Gather in!

Okay, so for this week’s Gotham recap, we have me, Drew Grant, substituting for Vinnie Mancuso, who is currently on sabbatical to hunt for B.D. Wong’s missing Emmy. Don’t worry, he’ll be back next week.

In the meantime, you need to treat me with the same respect you’d give your normal recapper! I might not run this reference guide the way you are used to, because I’m not a nerd who pays attention to things like prison inmate I.D. numbers, or trucks named after the guy who wrote that issue of Batman that introduced a super-villain named “TruckFace Guy.” (Nailed, it Drew. Keeping it 100!) But I do watch this show a LOT, so you’re not dealing with a newbie. I know that Poison Ivy ACTUALLY aged because she was touched by Marv, who has the powers to make someone super-old. (See: Mrs. Peabody’s desiccated mummy corpse.) I only told Vinnie my “magic sewer water” theory after first time I watched it, and I was on Ambien that time.

Instead, we’ll be focusing on the parts of Gotham’s episode “Mad City: Look Into My Eyes” (what is this, a Ryan Murphy production?) that I found interesting. Namely, a new weirdly attractive guy! 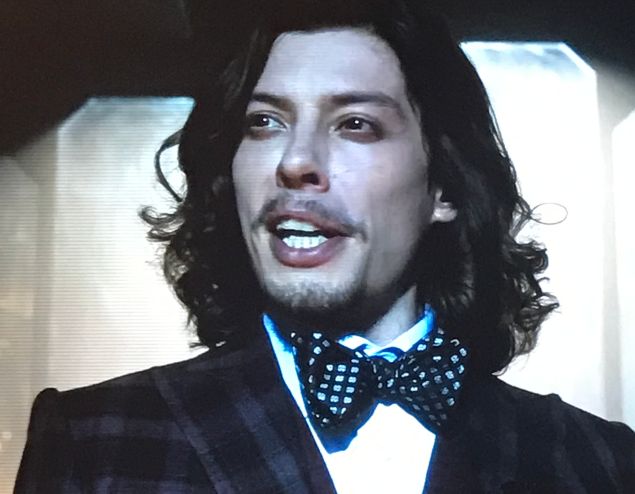 Benedict Samuel as The Mad Hatter on Gotham. Fox

What’s this guy’s deal? He’s good at…hypnotism. He’s like Kilgrave from Jessica Jones, except in order for it to work he has to convince you to look at his swinging pocket-watch for a hot minute. Which seems like it would be very ineffectual in any non-theater-themed venue, but hey, Jim Gordon totally falls for it on the roof of the end of this episode. He’s like “WHAT’S GOING ON?” in that weird growly voice of his, probably while cricking his neck and tensing his fists, and the Mad Hatter is like “I’ll explain EVERYTHING, just watch me swing this little clock around for thirty seconds.” Which Jim Gordon does, because he is very, very, very stupid.

Oh, yeah, can we address that? Watching Jim Gordon slowly climb up the police chain with his loyalty and strong morals has been excruciating. All the good intentions in the world do not make you qualified to be a police officer anywhere in the world except Gotham. I’m so glad he’s a bounty hunter now! Who consults with the police! Like Sherlock Holmes, but with the brain of one of those puppies that bark at the mirror.

Anyway, let’s not focus on Jimbo this week. He’s so dumb, we find out that maybe he’s secretly suicidal (bummer!) and only client is a weird dandy fop whose sister has poison blood. At one point, Jim Gordon goes to the hospital to get head stitches, and the doctor is his ex-fiance Lee’s new fiance. AWKWARD! To be fair, Lee gave Jim the heads-up that she was back in town (which is thrilling Captain Barnes to NO END, because they’ve lost, ALL their forensic people to either insanity or murder lately), since her betrothed was stationed for his residency there. NOTHING WEIRD ABOUT THAT!  Or the fact that the new fiance, MARIO (it’s uh-me!), looked nothing like the Gordon-esque dopple-ganger Jim saw when he was peepin’ outside her house in the season premiere. Oh also, he’s the son of former Gotham criminal boss, The Gay, Mean Captain From The Wire. Not to be confused with Gotham’s corrupt former head of GCDP, The Gay, Nice Dad From Girls.

Anywhoozle, the hypnotist is Jervis Tetch. That just rolls off the tongue. He can make people do impossible-seeming things when under his enchantment, but they have to be things they WANT to do secretly, like stand on the top of a chair with one foot or murder their wives and then kill themselves. He is looking for Alice in Wonderland, who is also his sister, and was last seen at Hugo Strange’s Off-Brand Mutant Emporium. She has poison blood. Why Hugo Strange ever thought that was going to be a thing, beats me. This is a guy who created Cupcake Quicksilver, after all.

So, Jim finds Alice for Jervis, but Alice is like “Nah, I’m good.” Also, she burns things to the ground a lot, maybe unrelated? And Jim’s like “Oh wait, are you actually hiding FROM your brother?” and Alice is all “Aw, who wants a treat?”

Then there’s the rooftop showdown and Jervis almost convinces Jim to kill himself by jumping off a ledge, but Alice shows up and shoots her brother with a disappointingly non-whimsical gun of some sort, and Jim snaps out of it, or something. THE END. (For that plot-line.)

MEANWHILE: Bruce Wayne has met HIS dopple-popple, named Five in what I can only assume is an adorable Stranger Things callback. Five is a clone of Wayne, but like, way cooler and with better scars and he’s faster and stronger and has less of that mopey, privileged baby douche vibe than bar mitzvah Batman over here. This bro is also impervious to pain. Did Dr. Strange make BANE? Oh wait, no nerd speculation here!

I just loved the scene when the Robert Smith-hair’d Five cut his beautiful locks and learned how to say “I’m sorry” till he sounded like Bruce, just so he could go impress Selina Kyle on a date! That’s so great. She deserves better than Bruce Wayne, who manages to give his friend the ultimate neg when he calls her care for Poison Ivy “unusual” or some shit. Uh, that bitch has WAY more friends than you do, Bruce! Remember that chick Firefly? Who do you have? An old Butler. Go to bed, Bruce. Let Five take it from here.

In a different part of town, I guess, Cobblepot is still running for Mayor because he is good at mob stuff. Both creating them and also running them. Sure. I mean, Gotham’s corrupt as hell, it’s police force is incompetent, and at any given time, vigilantes like Jim Gordon and Bruce Wayne are the only effective thing keeping the CRIMINALLY INSANE from blowing the whole damn city up. You want it, Penguin? Seriously bro, all yours. I mean, Butch shows  some reticence about it, because he just wants to go eat spaghetti with his hammer hand in peace somewhere. Not be in charge of volunteer headquarters!

What else, what else? Oh, yeah! Except Cob-pot let my boy Nygma out of…um, wherever they are keeping the criminally insane now! (Arkham, still?) Because no one in this show is quite as ship-worthy as Penguin and the Riddler. 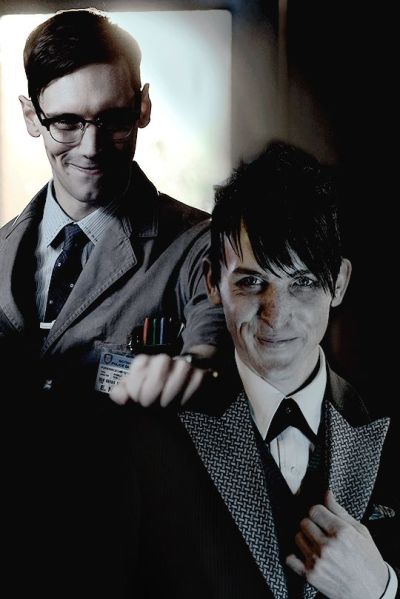 Go ahead. Search for those two on Tumblr. Report back immediately! Or never, because, as I mentioned earlier, Vinnie will be back next week. 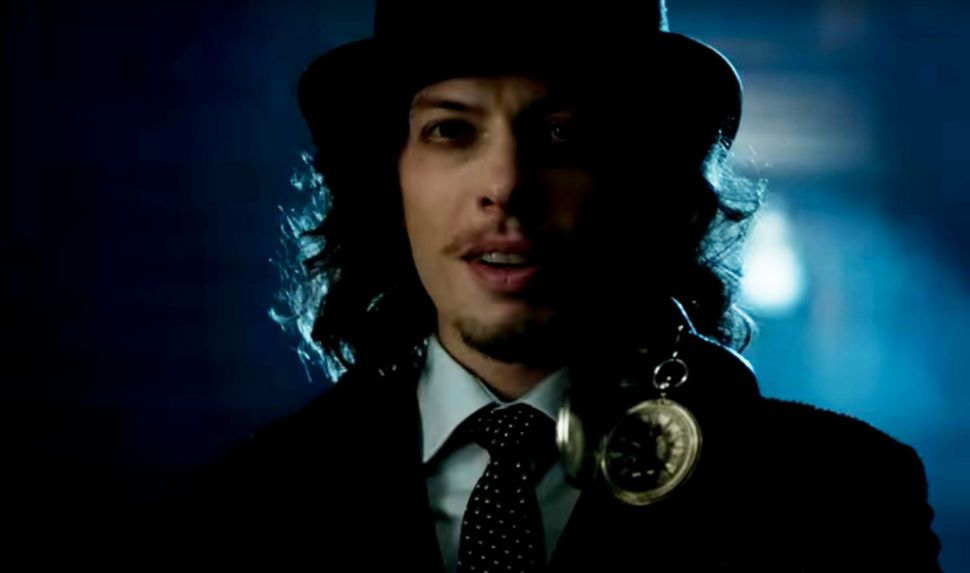