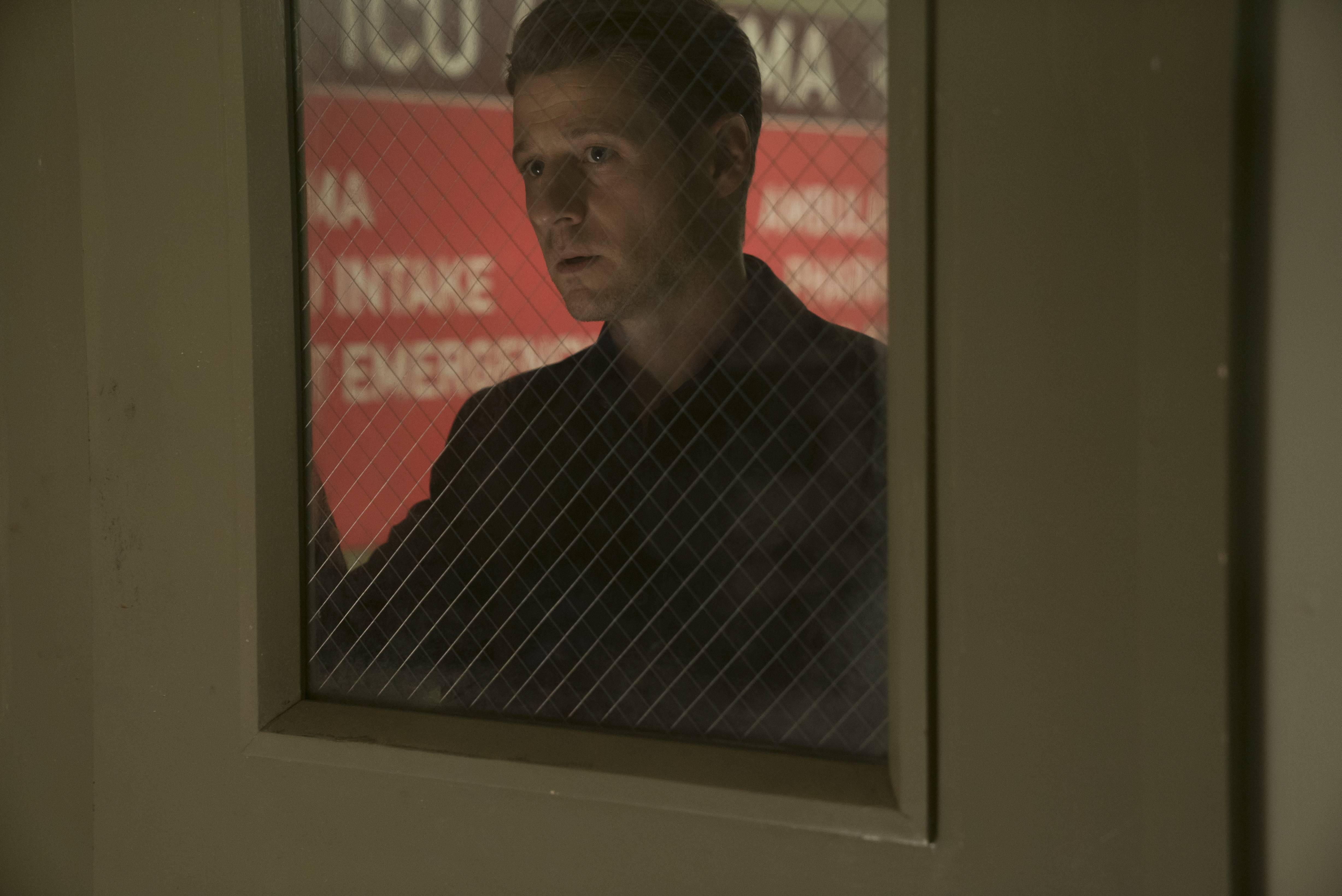 Hey, so, do me a favor? If I ever get shot in the stomach in Gotham City as part of a life-or-death, revenge-themed tea party held by what appears to be a homeless Mad Libs fan in a top hat well..actually, no, that’s fine, I moved there, that was my choice. But can you just make sure I don’t end up at the hospital where the only source of light is a frantically blinking ambulance siren?

I already assume the nurse handling my anesthesia is going to somehow grow up to be, I don’t know, Calendar Man or some bullshit, so the least the staff can do is turn some lights on.

Let’s, uh…let’s back up. Before {spoilers} Valerie Vale ends up fighting for her life in a hospital with less light and ventilation than the actual Bat Cave, we have an episode of Gotham, –titled “Follow the White Rabbit”, an insider reference to the mountain of cocaine it takes to write an episode of Gotham–that feels like a return-to-roots of sorts, mostly because it’s so Jim-centric. Now, ignoring for a moment that Jim-Centric is the name of the Gotham-themed CrossFit gym I’m currently looking for financial partners to open with in downtown New York, “Follow the White Rabbit” wasn’t a bad start toward making Jim Gordon an interesting character again. After all, homeboy Jim needs to go through some shit to be the hardboiled, cigarette-smoke-through-the-nose Commissioner Gordon that meets Batman on darkened rooftops like it ain’t no thing.

So…some shit. We open with Jim and Valerie, who Jim infuriatingly refers to only as “Vale”, in a diner hashing out their agreement where Jim gives her insider info for the Gotham Gazette in exchange for doing the sex. Because this is Gotham City, no patrons notice the shabby, zombie-like albino–Jervis Tetch’s White Rabbit, as it were–shuffle into the diner and recite some truly terrible nursery rhymes: “Follow my friend the way to go / to learn the truth you’ve hidden below.” Jim, for his part, responds in basically the same manner as Keanu Reeves when you tell HIM to follow the White Rabbit.

Unfortunately, instead of entering The Matrix, Jim watches a hypnotized newlywed couple plunge hundreds of feet to their death, which is more like entering The Matrix Reloaded. You see, this episode is all about choices, choices Tetch offers to Jim; between right and wrong, between loved ones, between being the hero and acting the villain. First, the falling bride and groom or a child in front of a truck–which, I mean, that’s saving two lives against one, that’s simple math Jim, plus that kid is like 10 what does he know about life anyway?–but, no, Jim makes the impossible choice. He saves the child, tackling the boy away from the truck so aggressively I am 90 percent sure he died anyway.

Choice #2: Tetch kidnaps a doctor and a journalist, whose names we actually never learn so when {spoilers} both of them are electrocuted horribly to death anyway it doesn’t really matter, and tells Jim to kill just one. This, for as morally shallow as it is AND as completely irrelevant the presence of Bullock and Co. is throughout–is a pretty great turning point for over-this-shit Jim Gordon. Pissed off piece of burnt toast Jim is the BEST Jim. There’s a fantastic moment in that warehouse where Tetch is like “A JOURNALIST AND A DOCTOR, IT’S A METAPHOR FOR THOSE TWO WOMEN YOU LO–” and Jim is just like “yeah whatever I get it why did you hook up this stack of TVs instead of just one, seems wasteful?”

Which leads, quite nicely, to Choice #3: Because getting into bed with Jim Gordon is the same thing as getting into a bathtub with a plugged in toaster oven, Tetch kidnaps both Valerie Vale and Leslie Thompkins and forces Jim to decide which one dies. Now, there’s some substantial problems with the  back-half of “Follow the White Rabbit.” Even though Benedict Samuel is giving his damn all as Jervis Tetch–I actually love how he plays The Mad Hatter as if Johnny Depp as Captain Jack Sparrow and Johnny Depp as The Mad Hatter had a baby and then that baby got suuuuper addicted to heroin–but the tea party scene simply drags too long. It was like a more whimsical version of that brutal, eye-popping Walking Dead premiere. Plus, Tetch bringing his two victims to Leslie’s home address is the type of flawed villainy that’s pretty hard to just ignore.

But, for all that, I’m super intrigued with how it ends, because Gotham made the boldest choice possible..it actually made Jim make the choice. No one swooped in–well, Fiancé McWhatsHisName tried and hilariously failed–and Jim didn’t have any other ace up his sleeve. Not just that, the capital letter Implications of his decision (“Shoot, Lee”) or so double-sided we could call them Dented. On one hand, you can assume Jim knew Tetch would shoot the woman Jim chose to save, and picking Lee ensured her safety. On the OTHER hand, there’s the chance that broken, near-alcoholic, monster-hunting-without-shaving Jim is so rock-bottomed out he straight up weighed his options and found Leslie wanting. Screw you, girl, you moved on. Here’s a bullet, in this style, 10/6. The episode’s ending, with Jim and Leslie sitting silently in a hospital hallway with an unspoken terrible knowledge between them as if this episode was written by Noah Solloway, was surprisingly, impressively low-key dark for a show like Gotham. My reaction, in short: “Whoa.”

Elsewhere, Gotham’s moving parts didn’t do much to warrant more than a passing mention, as entertaining as they all are. I mean, it’s huge for both character and canon that Oswald Cobblepot articulated, out loud, the words “I love you,” but it will have more weight when the chair across from him isn’t empty. Meanwhile, Erin Richards has been pulling off the Herculean feat of stealing every scene she’s in as bananas-as-hell Barbara Kean, while at the same time being given so little of substance to do by Gotham‘s writers. I’m not entirely convinced Richards isn’t just showing up to set with a bottle of wine and commenting on the scenes happening around her without a script.

As always, let’s run down every reference, fact, and nugget of Bat-history brought up in season 3, episode 6, “Follow the White Rabbit”

The White Rabbit of the comic books, real name Jaina Hudson, first appeared in 2011’s Batman: The Dark Knight Vol. 2 run by David Finch and Paul Jenkins. She…pretty much has nothing to do with the character appearing in this episode of Gotham. Physically, though? Pretty much the same character. 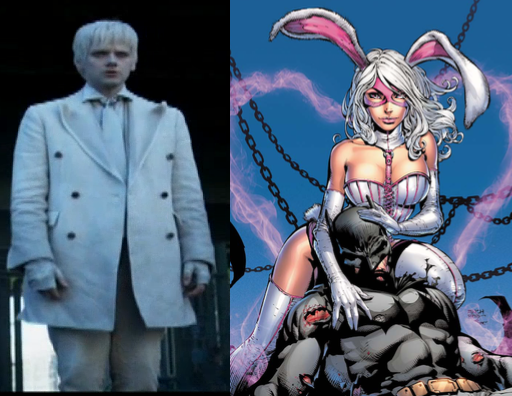 Trident Shipping, the company behind The Dollmaker’s child-trafficking ring allllll the way back in season one, has been popping up in the background erywhere this season. At least twice in “Follow the Right Rabbit”, for sure: 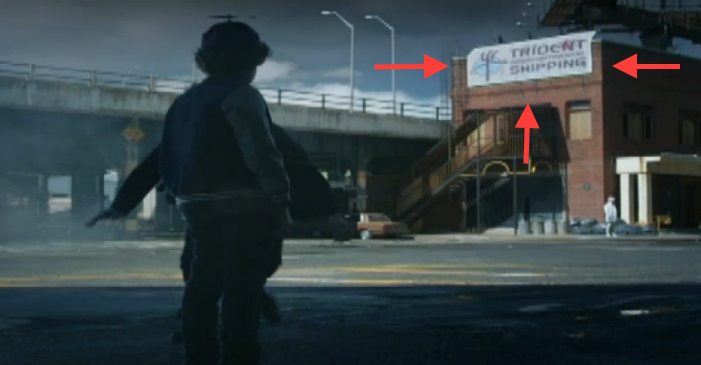 And here it is in “Anything for You”: 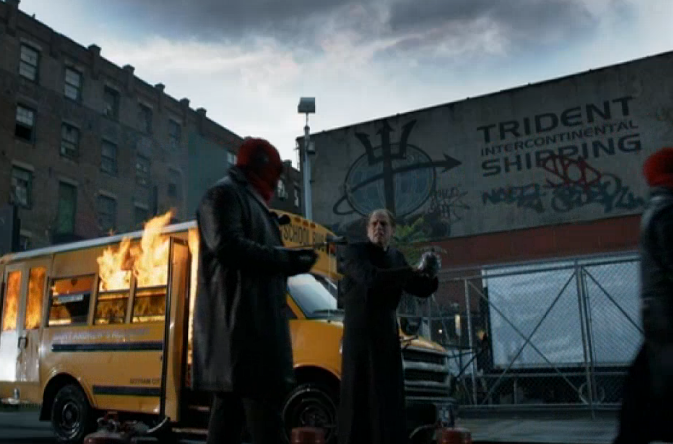 Right behind the exploding priest. FOX

So, either, A) Trident Shipping is coming back to Gotham in a big way (worth noting it usually appears in the background of someone dying horribly) or B) Gotham’s set designers are running super low on billboard material. Two equally terrifying options. 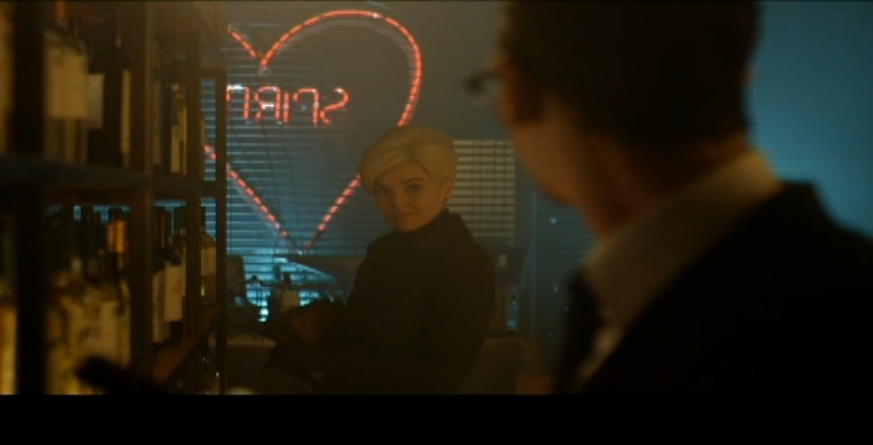 Here’s a game of Six Degrees of Edward Nygma for you: Isabella sounds like Isabelle — Isabelle Charanova is a cybernetic assassin that first appeared in 1999’s Legends of the Dark Knight #119 — Isabelle Charanova operated under the name Echo — The Riddler used to have two henchman named Query and Echo.

All of this is to say that clearly Krysten Kringle just came back from the dead and this is the Solomon Grundy storyline Gotham‘s EPs promised us. 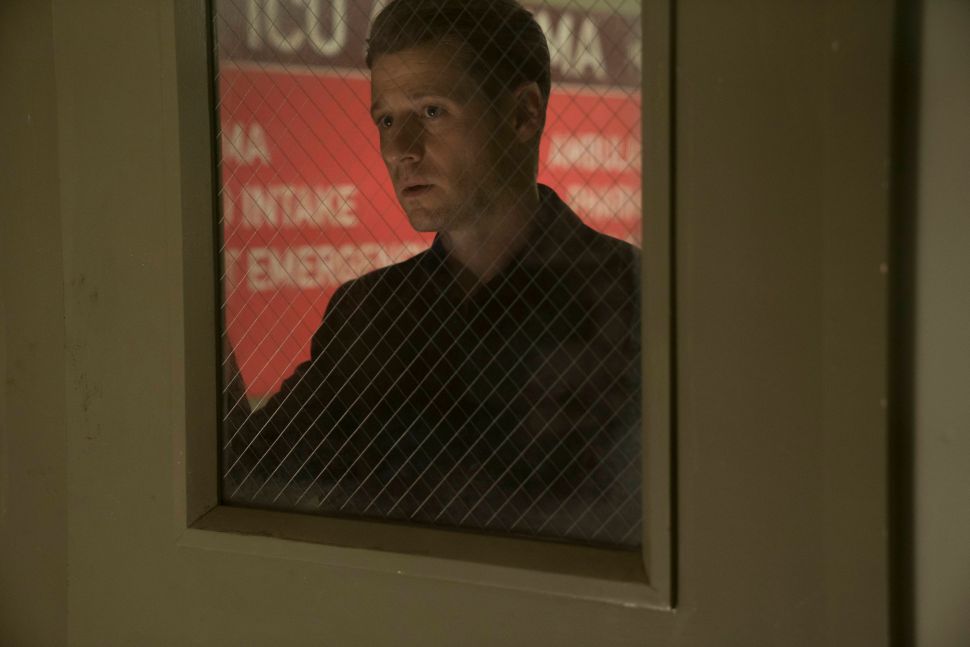