Fear-as-entertainment has most often been conveyed through the art of storytelling.

Generations of kids grew up hearing disturbing fairy tales at bed time or sharing ghost stories around the glowing coals of a campsite on a summer night. Most of us (hopefully!) read Edgar Allan Poe’s Tell-Tale Heart or The Horror at Red Hook by H.P. Lovecraft until Stephen King came along in the early ’70s and upped the thrill and chill quotient with Carrie and The Shining. While these books left deep imprints on our psyches and emotions, the written word would inevitably be replaced by the unhinged visions of dark cinematic poets like Fritz Lang, Tod Browning, Alfred Hitchcock and the gothic camp of Hammer films.

Beyond novelty numbers like “The Monster Mash,” “Zombie Jamboree,” “Spooky,” or the Who’s “Boris the Spider,” which were more fun than frightening, other than Bernard Hermann’s soundtracks and George Crumb’s discordant composition “Black Angels” (which both employ stabbing violins),popular music seems content to leave terror alone and stick to the foibles of love. But remember it was Igor’s oboe that possessed the power to lure the monster back home after everything Doctor Frankenstein tried had failed.

The first song to scare the hell out of me was Jerry Lee Lewis’ “Great Balls of Fire.” I was about 5 years old, playing down in the rec room when my sister Jane tossed a new single on the record player. Suddenly a volcanic blast came bursting through the speaker. “Oooh, feels good!”

“The Killer” howled maniacally. It was the first time I had any clue that the devil existed…and I liked it! A moment later I ran upstairs as fast as I could, frantically searching for my mother.

Apparently the song also terrified its author as well, as a tape recording of the famous debate between Jerry Lee and his producer Sam Phillips later revealed. Lewis apparently got cold feet, convinced there was hell to pay for unleashing such blasphemy on the youth of America. “You can save souls!” Phillips implored, hoping to convince his reluctant artist of the healing power of his music. “How can the devil save souls?” Jerry Lee protested. “I got the devil in me!” Thank God or someone or some thing that Lewis eventually acquiesced and cut his second smash hit on October 8, 1957.

As a young girl New York chanteuse Carol Lipnik found “the maniacal laughter” of wild man Screamin’ Jay Hawkins’ 1956 “I Put a Spell On You” unnerving.

“That song is the heart of Halloween, a celebration of our feral nature. You might think you know someone but people are unpredictable. We’re capable of anything!” Lipnik pointed out.

Her playlist of fearsome melodies included Dr. John’s spooky voodoo chant “I Walk on Gilded Splinters,” as well as the Kinks’ seemingly cheery pub-rock singalong, “Death of a Clown.”

“His makeup is dried on his face and he can’t escape his fate. The chorus is so creepy. They sing in these high voices, like little girls, and you know, when little girls sing in horror films it’s never good!” Carol said with a laugh.

“But the most terrifying song I’ve ever heard in my life is ‘Poppies’ by Buffy Sainte-Marie, from Illuminations, which I nominate as the scariest album of all time. She sings in this quivering wail, an ululation that’s saturated in reverb. The lyric, ‘I tippy-toe across your dream each night…’ lulls you into a false sense of security until she starts to shriek that her hands are like ‘two hooks of steel’ and her hair and eyes have turned to ice.”

Lipnik is a bit far out herself. “The Barbara Streisand of the Weird” performs an enthralling cabaret show every Sunday at Pangea in the East Village, in which she offers a striking cover of Michael Hurley’s classic, “The Werewolf.”

Encouraging her audience to wail and moan along with her, Carol introduces the song, saying: “Hear the anguish cry of the werewolf and let us all howl in a pack for we are agents of love and destruction.” Lipnik’s own tune “The Two-Headed Calf,” is a startling ode to the odd, based on a poem she discovered in an old collection of forgotten rhymes, in which Carol’s haunting voice reveals the sad, tender heart that lies beneath the thick scarred hide of freaks and monsters everywhere.

Exposing the dark, disturbing underbelly of the human psyche seemed like Jim Morrison’s favorite hobby. For many of us “The End” by the Doors was the first inkling that something seriously twisted lay beneath all that flower power coming out of California in the mid-’60s. The Doors’ second album Strange Days revealed more “weird scenes inside the goldmine,” with creepy songs like “People Are Strange” and “When the Music’s Over.”

It was a theme that Morrison and his dastardly crew continued through their final 1971 album, L.A. Woman, with “Riders On the Storm,” a chilling tale of a psycho killer whose “brain is squirmin’ like a toad.”

“I had heard some songs that were scary but entertaining. Syd Barrett comes to mind, who sounds like somebody unhinged and in that case we know the story does not end well. Still there’s a lightness and fun there so it’s easy listening,” said Violent Femmes bassist Brian Ritchie.

“It wasn’t until I heard [country music legend] Porter Wagoner’s ‘Rubber Room’ that I was actually scared by a song. Such a matter-of- fact, unadorned and artless description of madness that one can’t conclude it’s a literary work. It’s simply a raw and rotting slab of autobiographical writing. One that makes you think, please don’t let this happen to me. Extra points for the production on the recording. You can just imagine Porter telling the engineer, ‘No, that’s wrong!’ and then grabbing some knobs and twisting them, saying, ‘This is what it sounded like!’

“Many songs on Talking Heads’ third album Fear of Music are about fear,” John S. Hall, poet/lead singer of King Missile pointed out.

“‘Life During Wartime’ is a post-apocalyptic nightmare; ‘Heaven’ is about eternal boredom (‘Heaven is a place where nothing ever happens’); while ‘Air’ is paranoia writ large, but the final song, ‘Drugs,’ is terrifying, a brilliant, expressionistic masterpiece, that describes a nightmarish drug experience. The song opens with the sound of screeching birds, then an ethereal, alien sounding rhythm, and it just gets spookier from there.”

“After a minute and a half, the vocals begin: ‘And all I see is little dots…’ David Byrne’s vocal performance is haunting and beautiful, and Eno’s effects on Byrne’s voice make him sound lost in space one minute, then trapped in a box. Just as the lyrics end, almost all the sound is removed, the echo comes off Byrne’s voice, and you hear a close-mic’d laugh that is just chilling. Turn out the lights, smoke some angel dust, and give this track a listen. You’ll be sorry,” Hall said with a laugh.

Tom Waits’ spoken word piece “What’s He Building In There” (from 1999’s Mule Variations) evokes a feeling of neighborly paranoia second only to the famous 1960 Twilight Zone episode “The Monsters Are Due On Maple Street” in which a power outage signals the alleged arrival of aliens as good friends suddenly turn on each other with vicious accusations. Waits’ imagination runs wild as he states his case in a menacing sandpaper whisper,

“I pretty much just improvised my part on the contrabass clarinet in one take,” recalled multi-reed man/Waits alumni Ralph Carney. “It was an overdub, and so scary! Tom brought out the horror in me.”

Another harrowing spoken-word piece comes from the band Suicide. Recited over a palpitating kick drum, “Frankie Teardrop,” the story of a failed husband/father-turned-killer contains one of rock’s most blood-curdling screams courtesy of lead singer, the late Alan Vega.

But what truly frightens us is not always the obvious. Although a nice piece of atmosphere, Bauhaus’ “Bela Lugosi’s Dead” lyrics: “The bats have left the bell tower, the victims have been bled” are barely a notch above the typical Halloween card sentiment.

If you want to get deadly serious about this subject and have no fear of submitting yourself to a first-class sonic bludgeoning, then give the Norwegian black metal band Mayhem a spin. Their 1994 album De Mysteriis Dom Sathanas (which translates to “Lord Satan’s Secret Rites”) is enough to melt your candy corn.

As a chaser may I suggest the gut-wrenching Brazilian group, Sarcofago’s “Satanic Lust.” May God have mercy on your soul…

Finally comes an unexpected twist on the nature of fearsome music from singer/songwriter Jolie Holland. “I find crooners terrifying,” Holland offered. “All those sentimental, chill-ass chords, with that disengaged, ‘aren’t I so fucking cute’ vocal presentation. The kind of emotional distance they portray sounds to me like people who can justify any cruelty. Like a rapist who thinks he is cute. Or drones. It sounds like the vicious, unconscious soul who expects to do all his murdering in secret, and to be forgiven in the morning.”

“Sinatra’s chill, fake love songs sound more brutal to me than the loudest, most discordant bands I’ve ever heard. Straight up demonic musicians like Nick Cave, Diamanda Galas, or Nina Simone singing Kurt Weill’s ‘Pirate Jenny,’ as she wheezes, ‘Kill them right now,’ from the bottom of her voice, none of them are as terrifying as those boys with the pretty voices singing bullshit about love.” 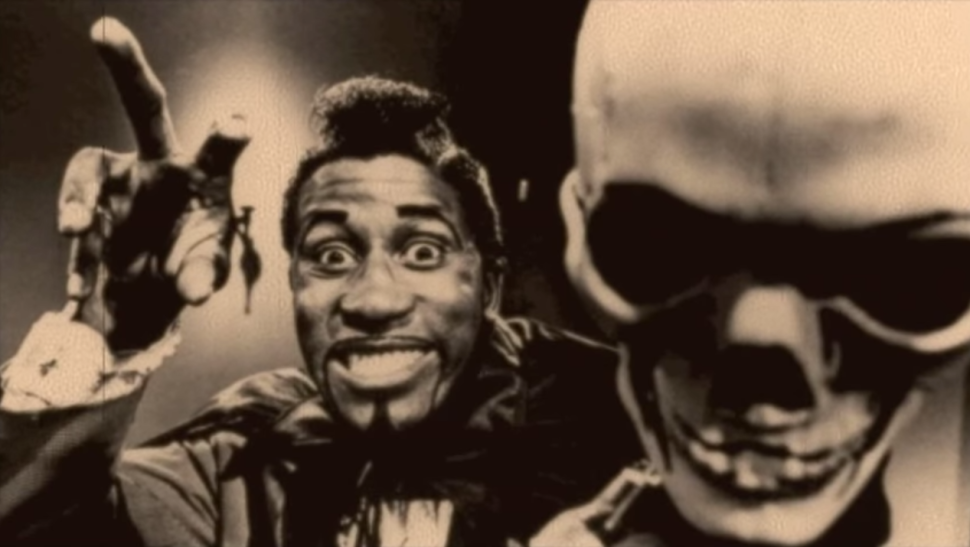