“I’m so sick of hearing about the future,” says Cameron Howe-Rendon. “What is that? The future is just another crappy version of the present. It’s some…it’s some bribe people offer you to make you do what they want instead of what you want.”

“This future can be different,” Joe MacMillan.

For Halt and Catch Fire, the future is now. Leaping forward into the ‘90s for the final two episodes of its masterful third season, “NIM” and “NeXT,” Halt pulled the time jump from the prestige-TV toolkit and utilized it as well as any show since Battlestar Galactica and Lost, the two series that pioneered the practice, and Mad Men, its direct precursor and the show to which it has more than earned direct comparison this season. Mad Men incorporated time jumps directly into its architecture, with the time frame of each new season and the status-quo shifts that took place between every finale and premiere becoming one of its main attractions and driving concerns. Halt took a different, more unpredictable tact: It fast-forwarded into the era of the World Wide Web in the middle of its most tumultuous, dramatically engaging, and all-around excellent episodes to date. The move makes sense for audience engagement, sure: “www,” “http,” and “html” are far more recognizable tech terms than anything on which the show had been focused so far. But it could easily have backfired in every other conceivable way — cutting off the mounting tension between the characters at the knees, setting them adrift and forcing us to find them again at a moment when they’d never been quite so individualized, so recognizable, so real. That the time jump not only worked, but worked spectacularly, is a testament to what showrunners Chris Cantwell and Chris Rogers and their cast and crew have accomplished together this season. We may have skipped forward into a new decade, a new age, a new period in the lives of our heroes, a new alignment of the relationships between them. But they remain the people we’ve come to know, and their story remains the one we’ve come to eagerly anticipate each week as among the very best being told on television today.

So, a brief catch-up. Mutiny is dead. So is the marriage of Gordon and Donna (née Emerson) Clark. Gordon is comfortably shepherding the NSFnet project he inherited from the late Ryan Ray and his heartbroken friend Joe, and not-so-comfortably managing his teenage daughter and his increasingly debilitating brain condition. Donna is a full partner at the venture capital firm of her friend and backer Diane Gould. Joe has stayed out of the spotlight since his company and his plans for the future crashed and burned, working as a consultant out of an apartment far less Olympian than any he’d occupied before. Cameron has cleaned up and grown up and become a star in the gaming world with her passion project, an exploratory videogame rooted in her own hopes, dreams, and fears as any work of art could be. She’s spent four years in Japan with her husband Tom and out of touch with the old gang. Her former father figure John Bosworth is living the life of Reilly by Diane’s side, taking up sailing and seemingly as comfortable in his own skin as he’s ever been.

In some ways, that can be said for almost everyone. The first episode in the dual finale, directed by co-creator Cantwell himself, makes life after Mutiny, marriage, and MacMillan Utility seem like relatively smooth sailing indeed. Gordon and Donna meet cute at a bar when they’re introduced by a mutual acquaintance unaware of their history; they begin flirting with each other so ostentatiously (and facetiously) that the guy gets skeeved out and splits. Their divorce appears amicable, the wounds that caused it mostly healed. Gordon struggles Joanie, a proto-grunge troublemaker chafing at her new living situation and her father’s attempts to move on with his life, but after a life intertwined with both Cameron and Donna he seems to understand and respect her independence and desire to self-define; for her part, Joanie appears to genuinely want better for her father, both in terms of romance and physical health.

Working with Atari, meanwhile, Cameron has at last found a venue fully supportive of her maverick vision, a vision that’s been greeted rapturously by fans who line up for her autograph at the big computing convention the group travelled to way back in Season One to pitch the Cardiff Giant. Her look has become softer, cooler, less jagged, in much the same way that Joe morphed from angular hard-charger to sweater-weather zen master. And Joe has taken his fall from the top in stride in a way that would never have been possible prior to to the trauma of Ryan’s suicide. When Donna — the one member of the group who seems truly hungry to regain what was lost when their partnership collapsed, desperate to make amends with and earn forgiveness from Cameron, the friend she betrayed and the genius she stymied — attempts to enlist Joe in her plan to connect Cam with the next big thing, the so-called “World Wide Web,” Joe receives her transmission while bathed in a nimbus of soft light from the lamp in his home office; he’s so soft-spoken when he finally approaches Cameron at the convention that it’s a wonder she even recognizes him. But he ignores Donna’s request and simply opts to get to know his old friend and lover again; their euphoric dance to the Pixies’ “Velouria” at the Atari party that night feels like the payoff for three full seasons of tension, passion, and bitterness.

Then Donna shows up herself, and it all starts going south. Cam flees with Joe rather than spend one more second with the woman who stole her company; they wind up having sex in a steamingly hot, emotionally intense scene cross-cut between the anticipatory buildup and the act itself. The next morning, the still very married Cameron leaves while Joe’s still asleep, but she heads straight to Donna’s room to bury the hatchet and hear about the big project. She’s so taken with the idea, with the unlimited potential connectivity this new way of networking computers presents, that she reboots her old interpersonal network to help make it happen. So we wind up pretty close to where we started: Cameron, Donna, Gordon, Joe, and fifth-wheel Tom (sensing something’s wrong even if he can’t articulate what) in a room in the old Mutiny office space, debating the shape of things to come.

The specifics of the debate are immaterial, though it’s to the show’s credit that they take minute after minute of unwieldy jargon and trust the audience’s ability not just to follow along but to connect the techspeak with the emotions of the people using it. The point is that the web is the next big thing — bigger than the Giant, bigger than Mutiny, bigger than SwapMeet, bigger than MacMillan Utility — because it effectively contains and connects all these things. The metaphor is clear: It could contain and connect all these people, too. It’s big enough for all of them.

Unfortunately, they aren’t. Tom and Joe’s heated arguments over the feasibility of the project, which admittedly is years away from the legal, financial, and physical framework it will need to come to fruition, devolve into a physical fight that sends MacMillan crashing through the Mutiny offfice’s rotted floorboards. Despite a boozy, sexy dinner together afterwards, Gordon and Donna’s rekindled professional relationship fails to reignite their romantic spark, to Donna’s suppressed but self-evident dismay. (Gordon asking if it’s okay to set her up with his friend, rather than himself, is maybe the saddest moment of the episode; whatever they had, it really is over.) Tom’s bearishness on the project Cam is so bullish about is pushed aside, for the time being anyway, mostly by way of him apologizing for mistrusting her and her accepting that apology, knowing full well he was right all along. (Shades of the mutual deceptions and undeserved apologies that marked the beginning of the end for the Clarks at the end of Season Two.) Presented with an idea this revolutionary, Joe lets some of his old alpha-male mad-prophet side back out, and who knows what it will take to contain it this time.

Most importantly of all, Cameron realizes that to be true to herself, she has to be rid of Donna once and for all. After two episodes dedicated to getting the show’s Lennon and McCartney back together, Cam cancels the reunion: “Donna, I can’t work with you.” Her old partner’s offer to jettison Joe if it would make Cam more likely to come aboard had backfired, you see; Cameron says this showed her once again “how easily you toss people aside when you feel like they’re in your way.” Donna rightfully protests that she was just trying to help, before adding — less truthfully, whether she knows it or not — “All I was ever trying to do was help you!”

But Cameron is not walking away from this new door to the future — she’s pushing Donna out of it. “Well, the thing is, Donna, I love this project. And I wanna work on it.” The gauntlet thrown, Donna accepts it. “Take it,” she spits through clenched teeth. “Take it.” Exiting the project she herself launched, Donna retreats to her car in the parking lot, shaking and sobbing…but only for a few seconds. The rapidity with which she switches off her despair and transforms it into cutthroat competitiveness, calling her office to book a flight to the Swiss laboratory where the Web is being midwifed, is a terrifying sign for the future.

What will that future be? For now, it looks a lot like the past: The faces of Joe, Gordon, and Cameron, the sole remaining members of the team, looking in the same direction, pondering what’s next, just as they did at the end of the show’s pilot episode. But for Halt itself, and for its ardent viewers (there are really no other kind), the future is bright: The show has earned itself renewal for a fourth and final season, announced the day before the airing of this finale, clearly intended to serve as a final episode for the whole shebang if need be. We’re going to get to see where these gorgeously drawn characters go from here. That’s a future worth celebrating. 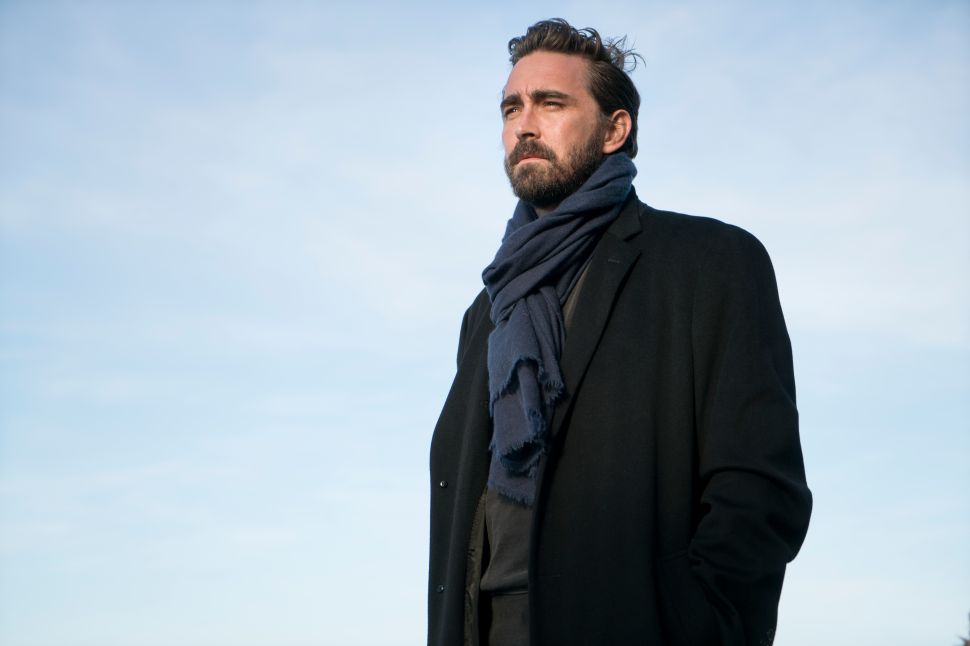