Sen. Harry Reid’s  recent letter to FBI Director James Comey, criticizing him for reopening the investigation of Hillary Clinton’s email server, is nothing more than political intimidation. The Senate minority leader’s letter further polarizes the federal investigation in an attempt to provide Clinton immunity—diverting attention away from her and toward her competitor. Reid sets a dangerous precedent, as he not only attacks the actions of the FBI director but his accusations that Comey broke the law threatens to undermine the integrity of the FBI itself.

Although untimely and inconvenient for the Democratic presidential candidate, Comey’s reaction is warranted, due to the evidence: thousands of emails linked to Clinton’s private email server from former Congressman Anthony Weiner and Clinton aide Huma Abedin that were previously withheld. Those emails never should have been on Weiner’s laptop, and they should not have been withheld by Abedin.

Comey received news of the additional emails this past Thursday and informed Congress the next day. Withholding the evidence would have violated the Hatch Act, as the decision would insulate Clinton from political damage prior to the presidential election.

Democrats took a huge risk by allowing Clinton to continue her presidential campaign in early 2015, knowing the FBI was investigating her private email server. They propped up her candidacy anyway, subverting democracy as they helped her defeat Sen. Bernie Sanders.

Clinton used a private email server to circumvent Freedom of Information Act request (FOIA) laws. FOIA officers were not informed of her private email server, and Clinton knew it was an impracticable method to preserve federal records. News was also just revealed that the FBI has been investigating the Clinton Foundation, in spite of partisans’ pleas that the charity and the overt conflicts of interest it posed during Clinton’s service as secretary of state were nothing to be alarmed about.

Reid directly accused Comey of withholding evidence linking the Russian government to Donald Trump. No evidence or context was provided by Reid to corroborate the serious claim. Rather, Reid’s accusation is politically motivated, meant to fuel the flames of increasing resentment toward Russia within the Democratic Party for the embarrassing WikiLeaks releases. Suggesting Comey is aligned with Russia is nothing more than an attempt to discredit the FBI’s investigation into Clinton. The only way Democrats can employ damage control over these new email revelations is to deceive the public—which is what Reid’s letter is intended to do.

After the Democratic National Committee (DNC) denied they were rigging the Democratic primaries for Clinton, leaks corroborated the claims of people who never trusted them to be neutral. This stained the integrity of the DNC—perhaps permanently—and sent millions of voters away from the Democratic Party.

Now the Democrats, because it politically suits them, are accusing the FBI of rigging the investigation into Clinton. This sense of outrage from Clinton partisans is manufactured to shield their candidate from damage and has no basis in reality. Even Clinton partisans have criticized Reid’s letter. Vox’s Clinton propagandist Matthew Yglesias tweeted, “Reid is free to be angry if he likes but this Hatch Act notion seems like nonsense and the fact is Dems gave Comey this job.”

There is no evidence showing Comey purposefully attempted to affect the outcome of the election, which the Hatch Law stipulates he cannot, and Reid is using the idea for partisan gain.

Other Clinton partisans have criticized Comey, yet their criticisms haven’t been disclosed as ploys to protect Clinton. A recent Op-Ed written by former Attorney General Eric Holder fails to acknowledge Holder is not criticizing Comey from his position as former Attorney General, but rather from the perspective of a prolific fundraiser for Clinton and her Democratic National Convention Committee chair. His credibility is also weak, considering he failed to pursue any case against big bankers after the 2008 economic recession. All these criticisms are meant to obstruct justice in Clinton’s case, not demand it. If partisans cared so much about justice in Clinton’s private email server investigation, a special prosecutor would have been appointed to oversee the case. 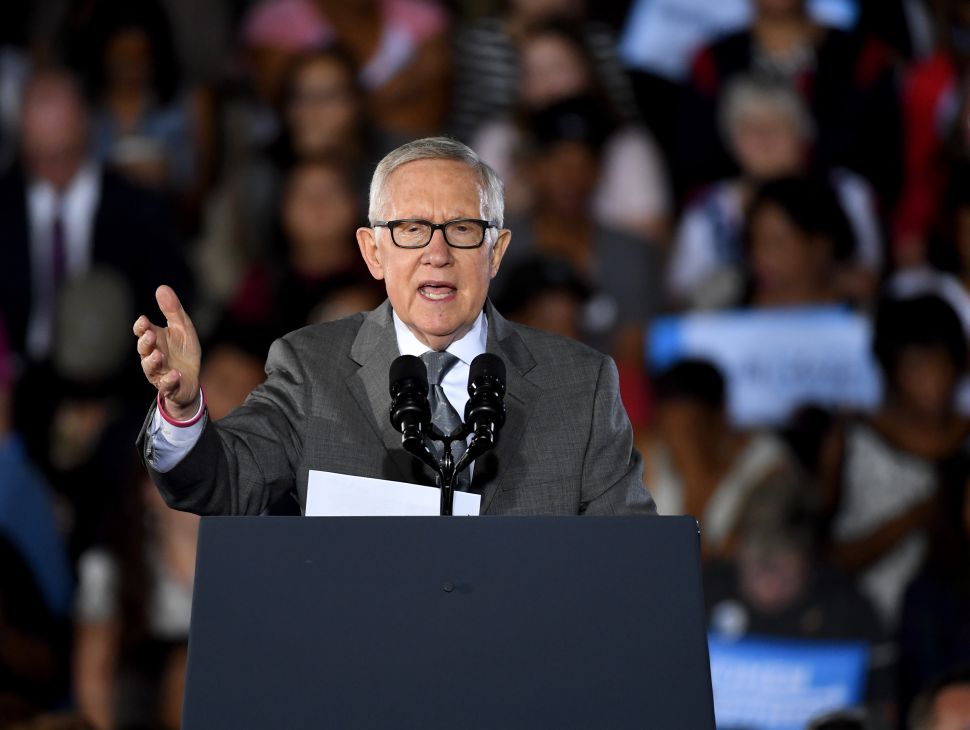