After a tense, vicious final debate—in which Donald Trump saying he’d keep everyone “in suspense” about whether he’d accept the results of the presidential election next month—the GOP nominee and Hillary Clinton battled bitterly again at the annual Al Smith Memorial Foundation charity dinner, where presidential candidates typically stick to friendly jokes.

And though both candidates—who were separated by Cardinal Timothy Dolan in their seating arrangement—had no problem poking fun at themselves Waldorf Astoria Hotel in Manhattan, at each other and at various politicians and figures at the dinner, it was clear that the tradition was indeed slightly broken. Despite his jokes doing well with the crowd, Trump’s tone toward Clinton  turned sour while his oppenent sought to end on a more serious, uplifting note.

The event, named after the late governor and Democratic presidential nominee and hosted by his great-grandson Alfred Smith IV, raised roughly $6 million for Catholic charities that support needy children.

The crowd initially seemed pleased with Trump’s performance. But an uncomfortable silence—along with several boos—eventually fell over the room.

The candidate said that for Clinton, going to confession is “the Fourth of July weekend with FBI Director Comey,” who investigated her infamous email server scandal and recommended she not face charges. Trump then blasted his opponent for saying she can fix the country despite little progress over her last 30 years in politics and that she believes “it’s vital to deceive the people by having one public policy and a totally different policy in private,” a reference to Wikileaks’ release of her campaign’s emails.

He also said she was at the dinner “pretending not to hate Catholics,” and said her jokes were given to her in advance of the dinner by Democratic National Committee Chairwoman Donna Brazile, allusions to controversial comments in hacked emails posted on Wikileaks. He also alluded both to the Clinton Foundation’s questionable work in post-earthquake Haiti with a jab at the former first lady’s 1996 book, It Takes a Village.

“After all, in places like Haiti she’s taken a number of them,” the candidate quipped.

Clinton similarly threw out some crowd-pleasing stingers, joking that the dinner was such a special event that she took a break from her “rigorous nap schedule” to attend and that she usually charges “a lot for speeches like this.” She also acknowledged she is not known for her sense of humor and said she’d like to put attendees in a “basket of adorables,” a reference to her claim that half of Trump’s supporters are “deplorables.”

Clinton’s jokes did get personal, too: she said she had hoped to hear from a billionaire—former Mayor Michael Bloomberg, that is, not Trump—and she also poked fun at Trump for dismantling his teleprompter the other day: “I get that, they’re hard to keep up with and I’m sure it’s even harder when you’re translating from the original Russian,” referencing his closeness with Russian President Vladimir Putin.

And she took it a step further, addressing the high turnover rate at the Trump campaign, where numerous personnel have resigned or gotten fired amid controversy.

“Looking back, I’ve had to listen to Donald for three full debates and he says I don’t have any stamina,” Clinton said. “That is four and a half hours. I have now stood next to Donald Trump longer than any of his campaign managers.”

Although she continued to take jabs at Trump—for instance, saying a third grade teacher told her one of her students refused to turn in his homework because it was under audit and that the Republican National Committee isn’t spending a dime to help either candidate—her tone became serious. She noted how groundbreaking it was for Al Smith, a Catholic, to be the Democratic Party’s nominee in 1928, the contributions of immigrants to the country and encouraged people to treat each other well, also rejecting Trump’s assertion at the Republican National Convention that he alone can fix the country’s problems.

“Donald will tell us after the benediction whether he accepts that this dinner is over,” Clinton said. “He has to wait and see. But there’s nothing funny about the stakes in this election. In the end, what makes this dinner important are not the jokes we tell but the legacy that we carry forward.”

And despite not being a swing state, New York was prominent. Trump acknowledged Gov. Andrew Cuomo and U.S. Senator Charles Schumer, saying Schumer “used to love me when I was a Democrat.” He even said he would have known Mayor Bill de Blasio—one of his constant critics—well if he had doing more real estate work.

“But your eminence, you do deserve great credit for bringing together two people who’ve been at each other’s throats—mortal enemies, bitter foes. I’ve gotta ask, how did you get the governor and mayor here together?,” Clinton said, garnering laughter from the crowd.

But she earned the ire of former Mayor Rudy Guiliani, a prominent Trump surrogate.

“Now, many don’t know this but Rudy actually got his start as a prosecutor, going after wealthy New Yorkers who avoided paying taxes,” Clinton said. “But as the saying goes, if you can’t beat him, go on Fox News and call him a genius.” 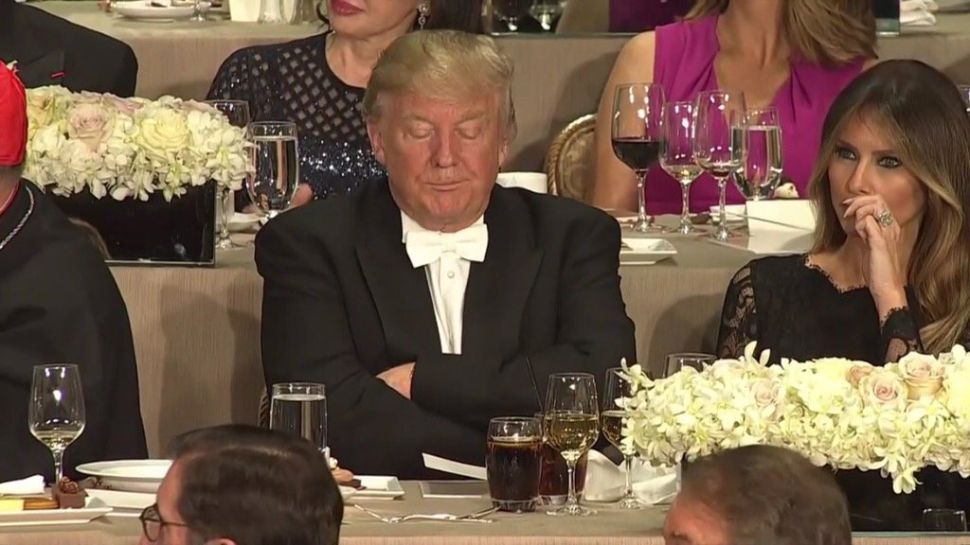