Hillary Clinton starts every response when asked about gun rights the same way: She supports it, but…

Those “buts” are really adding up, and causing her to make some pretty outrageous statements. At last Wednesday’s debate, Clinton had another one of these moments, when she defended her criticism of the District of Columba v Heller case that was decided by the Supreme Court in 2007. Clinton claimed the D.C. gun ban, which eventually led to the Heller case, was meant to keep toddlers from getting guns.

“You mentioned the Heller decision, and what I was saying that you reference, Chris, was that I disagreed with the way the court applied the Second Amendment in that case. Because what the District of Columbia was trying to do was protect toddlers from guns,” Clinton said at the debate. “They wanted people with guns to safely store them, and the court didn’t accept that reasonable regulation, but they’ve accepted many other.”

She added: “I see no conflict between saving people’s lives and defending the Second Amendment.”

Clinton was immediately knocked by the NRA and right-leaning media for her claim. The Washington Free Beacon’s Stephen Gutowski called Clinton’s claim “bizarre” and noted that the Heller decision had nothing to do with toddlers and guns and was instead about an individual’s right to keep a firearm for their own protection. Gutowski quoted the opening line of the majority opinion in Heller: “District of Columbia law bans handgun possession by making it a crime to carry an unregistered firearm and prohibiting the registration of handguns.” Nothing about children or toddlers or safe storage.

The Federalist’s Sean Davis also took Clinton to task for her claim, and provided more of a summary on the Heller case. Heller was about 66-year-old police officer Anthony Heller wanting to own and bear a firearm in his own home in order to defend his family.

See, the D.C. gun ban required people who were actually able to get a lawfully owned firearm to keep it “unloaded and dissembled or bound by a trigger lock or similar device.” This meant that even for the small number of people who could actually keep a gun in the district, it would be useless for self defense as they would have to spend time loading or assembling the gun or dealing with the trigger lock to make it work.

The Supreme Court ruled in 2008 that D.C.’s ban was unconstitutional. Davis wrote that the word “toddler” doesn’t appear in the majority or dissenting opinions or in the 110-page transcript of oral arguments.

But Politifact rated Clinton’s claim as “Half True,” because of course. Clinton’s a Democrat and gets special treatment from the “fact” checking website.

I will note that when Clinton said D.C. was trying to protect toddlers, I believe she was referring to the ban itself and not the Heller case. Politifact found a single petition from the D.C. city government that mentioned children (not specifically toddlers) as part of the reason for the ban.

“The smaller the weapon, the more likely a child can use it, and children as young as three years old are strong enough to fire today’s handguns,” the petition said. The petition mentioned the word “child” or “children” seven times, and also at one point mentioned the “chilling regularity with which handguns were taking the lives of children.”

But Clinton was wrong when she said D.C. was “trying to protect toddlers from guns” with the gun ban. That might have been one justification for the ban —the idea that parents were improperly storing guns, allowing children to get ahold of them and accidentally harm themselves or others—but it was not the main one, nor was it even half the justification. The initial stated purpose for the band was “to protect the citizens of the District from loss of property, death and injury, by controlling the availability of firearms in the community.” Children were specifically mentioned.

Clinton had previously said the “Supreme Court is wrong on the Second Amendment,” apparently referring to Heller. At that time she did not mention children, she was just pledging to “go after” the National Rifle Association.

A Clinton spokesperson in May 2016 also referred to the D.C. gun ban as a “safe storage law,” which is the spin way to describe a law that banned nearly all guns because the city thought fewer guns would mean less crime.

Clinton was absolutely wrong in her characterization of Heller and the gun ban. A “half true” rating was generous. Politifact had previously found claims that violent crime skyrocketed after the ban to be “half true,” as well, noting that violent crime in D.C. looked like “a rockin’ roller coaster” after the ban was instituted. Crime reach it’s peak in the District in 1993, but then dropped along with crime across the country – the 1975 gun ban couldn’t have suddenly caused the drop. Politifact ruled the changes were more due to social and demographic factors.

It should also be noted that the D.C. gun ban didn’t prevent toddler deaths. Immediately before and after the ban was adopted, between 1974 and 1979, just five people (total, not just children) were killed by guns in home or occupational accidents. The four years before the ban was struck down by the Supreme Court, 100 children were killed by guns –and only one was due to an accident.

In an attempt to help Clinton, the Brady Campaign tried to claim 2,600 “kids and teens” are killed each year by guns, but the group includes some adult deaths in its calculations.

This whole Heller/toddler situation is not Clinton’s first problem with the Second Amendment. In October 2015, Clinton was asked about Australia’s gun “buyback” program and whether it could be instituted in America. Clinton responded by incorrectly categorizing the Australia program as a “buyback” program, praising states that had instituted their own buyback programs, and closed by saying:

“I don’t know enough details to tell you how we would do it or how it would work. But certainly, the Australian example is worth considering.”

Those “details” Clinton claims to not know (even though they have been pointed out to Democrats for years) are that Australia’s buyback program was not voluntary; it was confiscation. Australia banned certain types of firearms, and offered to buy them from gun owners, but after a certain amount of time, people who legally purchased a firearm would be considered criminals if they didn’t hand in their gun. That’s confiscation, and Clinton endorsed it.

Naturally, when the NRA pointed this out, Politifact gave them a “mostly false” rating.

Finally, it was made clear from the illegally obtained Wikileaks emails that Team Clinton was worried about her extreme position on guns. In one email chain, D.C. lawyer and one of Clinton’s debate prep strategists, Karen Dunn, said that Clinton “has been more forceful on guns/gun lobby than any other person who ever seriously ran for president.”

She added that was not necessarily a good thing, as Clinton told her “certain members of the dem caucus were freaking out about” her stance.

Clinton can claim all she wants that she supports the Second Amendment, but anyone who believes in gun rights should be skeptical. 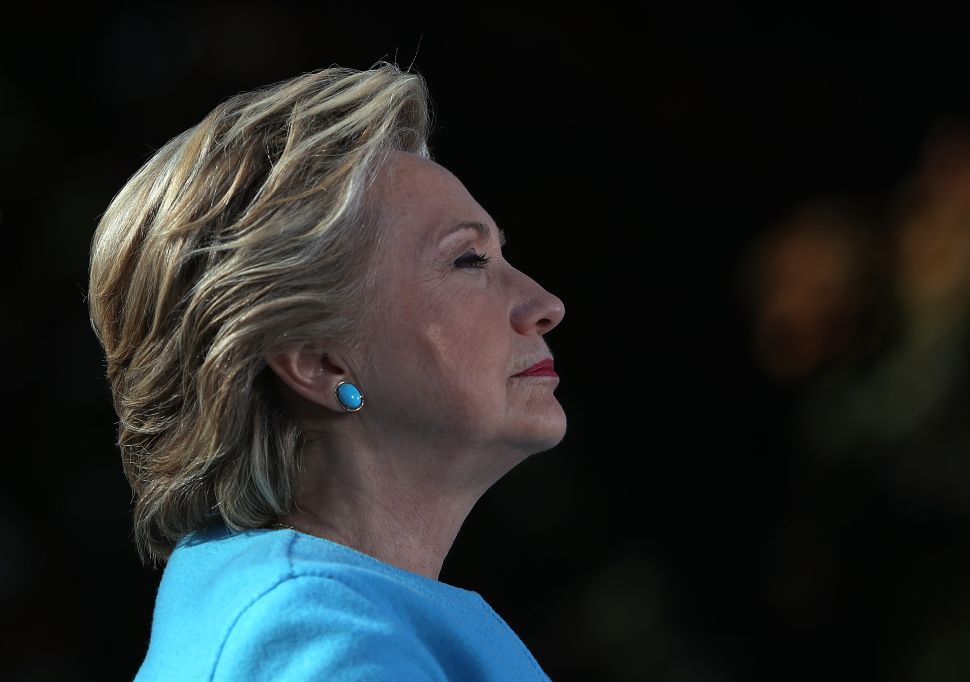